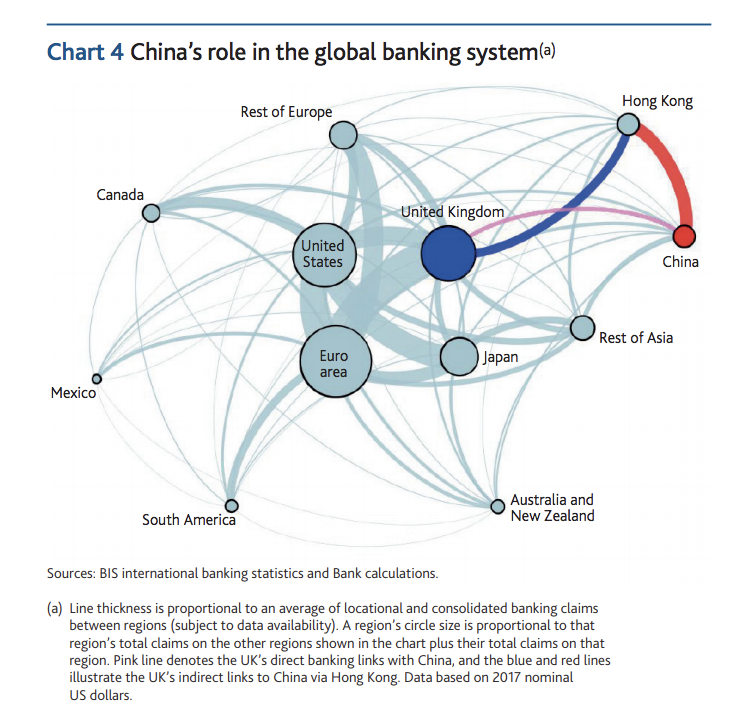 China apocalypse! Alongside the damage that may be done to capitalist accumulation by a trade war, the greatest threat to what we call the world economy is still a major China meltdown.

Why? Because China’s credit bubble is enormous. 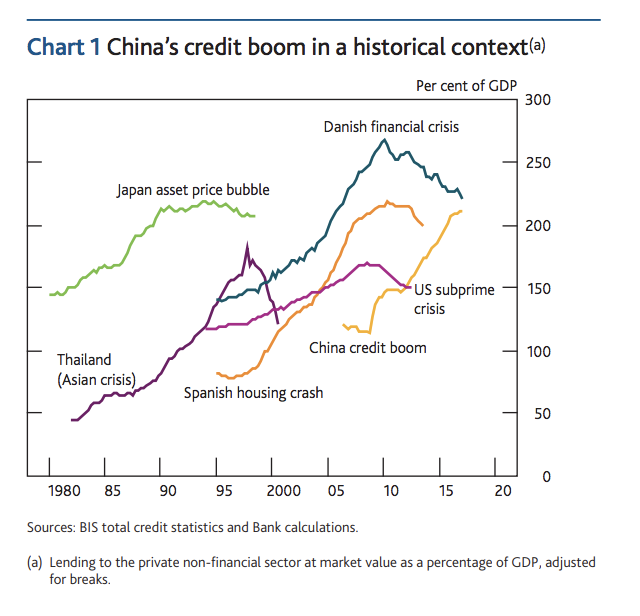 The Chinese economy is at the heart of global trade, it entirely dominates global commodity markets and the spillover effects would be substantial. 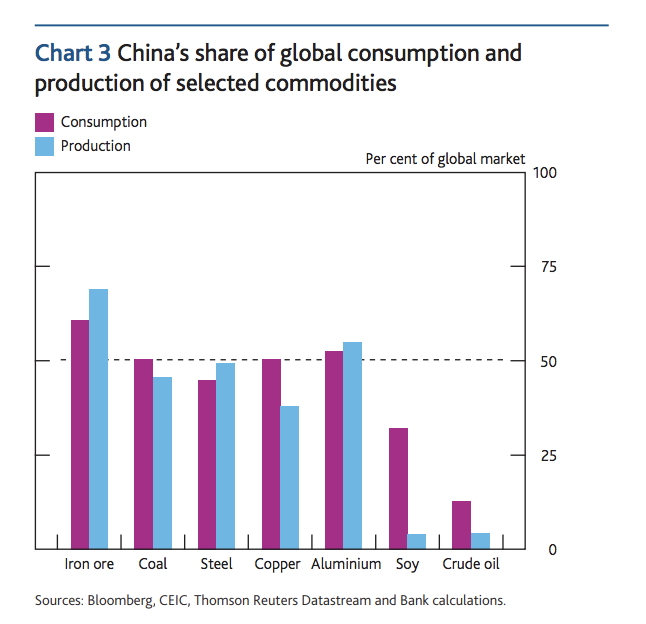 When China’s economy seemed to be wobbling in 2015, the effects could be felt all over the world. Recent Bank of England estimates show how large was the contagion effect from China’s “Black Monday” stock market collapse on 24 August 2015. 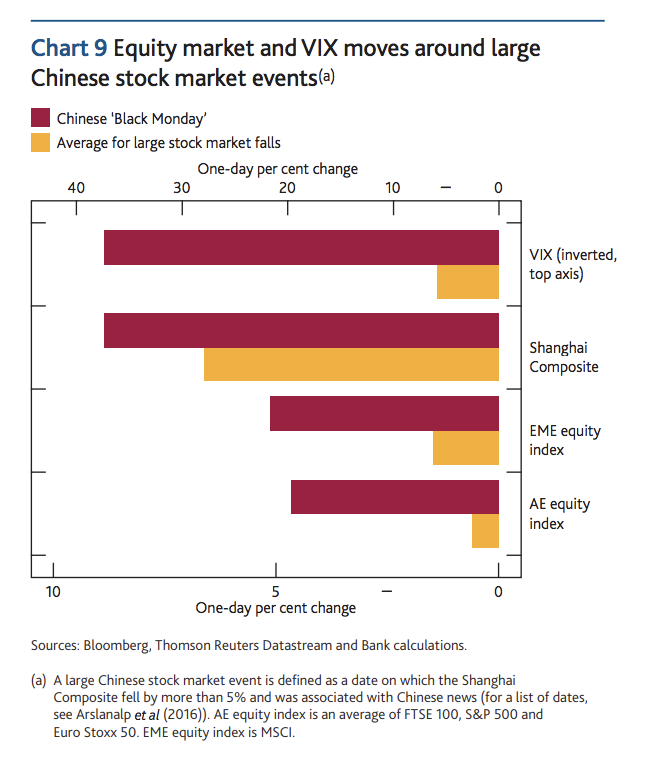 In September 2015 the contagion was large enough to cause Janet Yellen’s Fed to put off raising interest rates and to justify that decision explicitly with reference to China.

The Bank of England compiled these numbers as part of a fascinating report assessing the risks to the UK economy from a China meltdown scenario. The conclusions are sobering. Due to the rebalancing of the City of London since 2008, the risks to the UK from China are very substantial, probably uniquely serious. And the City of London, in turn, is a systemically important financial center. The report and the nightmare scenario it evokes in rather understated terms merits a separate post.

What caught my eye this morning is that in performing its analysis of the risks specific to the UK, the Bank of England produced a truly revealing anatomy of global interconnections. This is striking not only because of our present moment, weeks before the outbreak of what may turn out to be a major global trade war.

It is important also because it reveals a basic point which is fundamental for understanding not only our current moment and its risks, but also the basic logic of the 2008 crisis and why so many excellent macroeconomic analysts were, in the words of Brad deLong, predicting the “wrong crisis” ahead of time.

What we lump together in stories about globalization are a mass of complex flows and interconnections. What the Bank of England’s exercise reveals is how different the geography of these networks is.

Most importantly for the purposes of economic analysis, it highlights the fact that flows of trade and finance do not overlap. They are interrelated but they do not map on to each other one to one. As a result, big trade imbalances were not good predictors of the central axis of the coming financial crisis in 2007-8.

Here is the map of global trade drawn by the Bank of England. 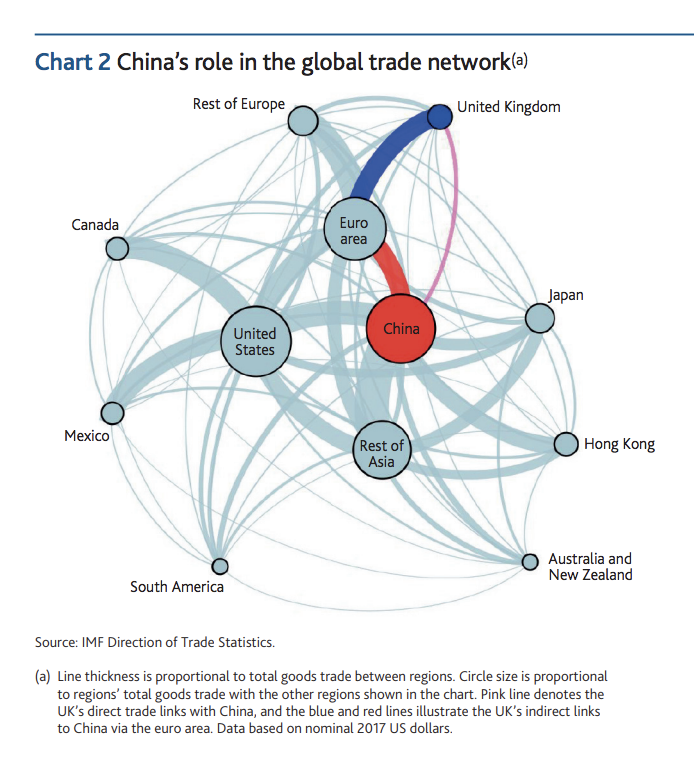 It is squarely centered where you would imagine i.e. between the US, China and the Eurozone. Each of those then has a regional sub-system. Pity poor Canada and Mexico, so far from the rest of the world, so close to America.

On the other hand, here is the map of the global financial system as charted by the cross border interconnections in bank balance sheets, compiled from BIS data.

This system has a different core. Its center is the triangle between the US (Wall Street), the UK (the City of London) and Europe (Paris, Frankfurt, Zurich).

Compared to the 21st-century geography of global trade, one is tempted to say that global finance still has a (mid-)twentieth-century geography. It still has the geography of the Eurodollar system that began to take on real scale in the 1960s, a system in which European and American banks, fed from financial flows around the world, built an offshore, dollar-based financial system.

The crisis scenario inferred from trade flows and current account data after 2000 revolved around the narrative of “global imbalances”. This scenario revolved around the risk of a crisis created by America’s twin deficits, the Sino-American axis, the great “China sell off”, Krugman’s “Wile E. Coyote moment”, a plunging dollar, surging Treasury rates etc. etc. It had a geopolitical dimension – Larry Summers’s “balance of financial terror”. It had a domestic party political dimension. It was a stick to beat the Bush Presidency with.

This was not the crisis that actually struck in 2007-2008. Brad Setser has a great post out this week on why it may not be a terribly realistic prospect in 2018 either.

What imploded in 2007-2008 were not Sino-American financial relations, but the interlocking claims between American and European banks. The implosion in global gross financial flows in 2008 is something to behold. 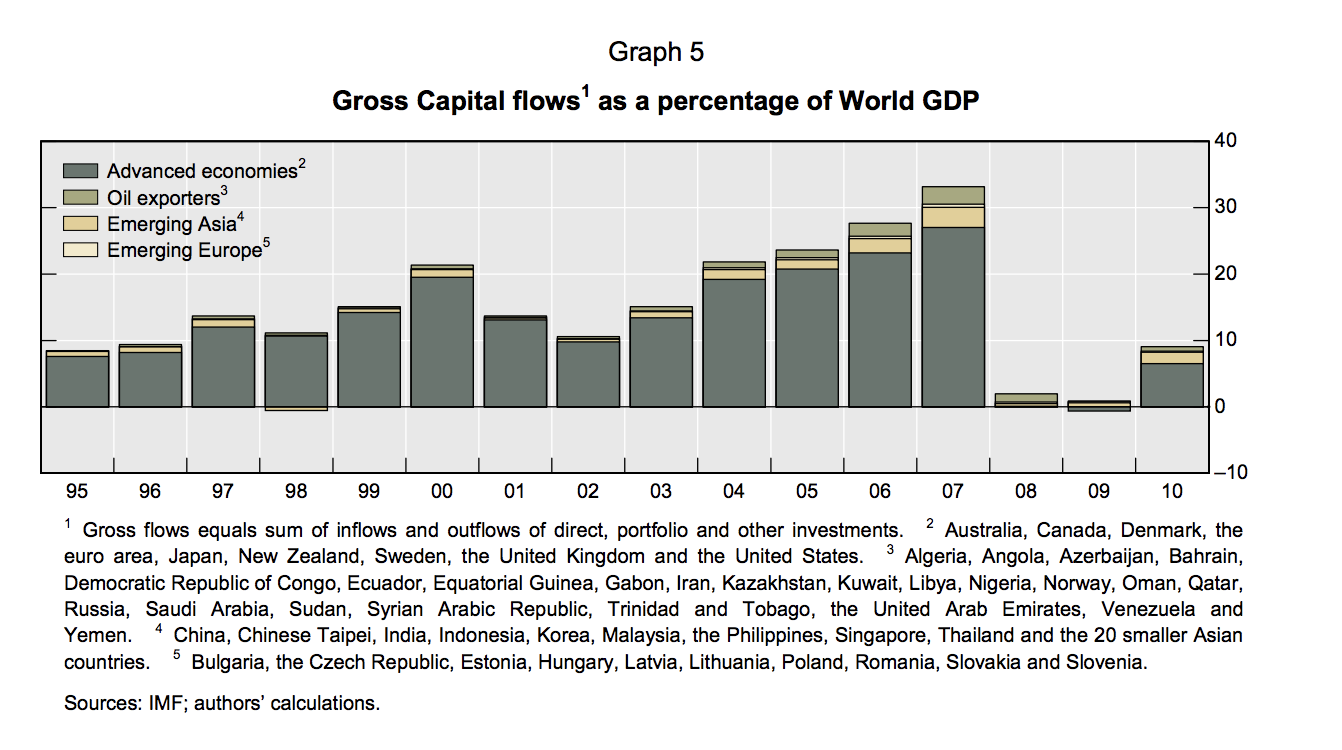 That astonishing graph is taken from the paper that really brought home to me the significance of these two contrasting accounts of the world economy: Claudio Borio and Piti Disyatat, “Global imbalances and the financial crisis: Link or no link?” BIS Working Paper 346 May 2011. I

Ok, you say, trade and finance are not the same. But is there a link between these two snapshots of the world economy, the one based on inter-national trade flows, the other based on bank balance sheets? There is a lot to be said about the significance of the shift from viewing the economy as a set of national economies to viewing it as a network of interlocked corporate balance sheets. But that is for a future post which will highlight why the work done by the BIS analysts and folks like Adrian and Shin marks such a crucial departure in modern political economy.

But there is a quick answer. Conventional macroeconomics does, of course, have a way of capturing the connection between these stocks and flows: the balance of payments (the full gross flows version, not the collapsed net accounting usually cited), which incorporates not just trade flows in and out of countries (for both goods and services), but income flows generated by investments and flows of capital (short and long-term).

If you look at balance of payments data for the US before 2008 and come at them from the conventional “global imbalances” perspective you are in for a surprise. 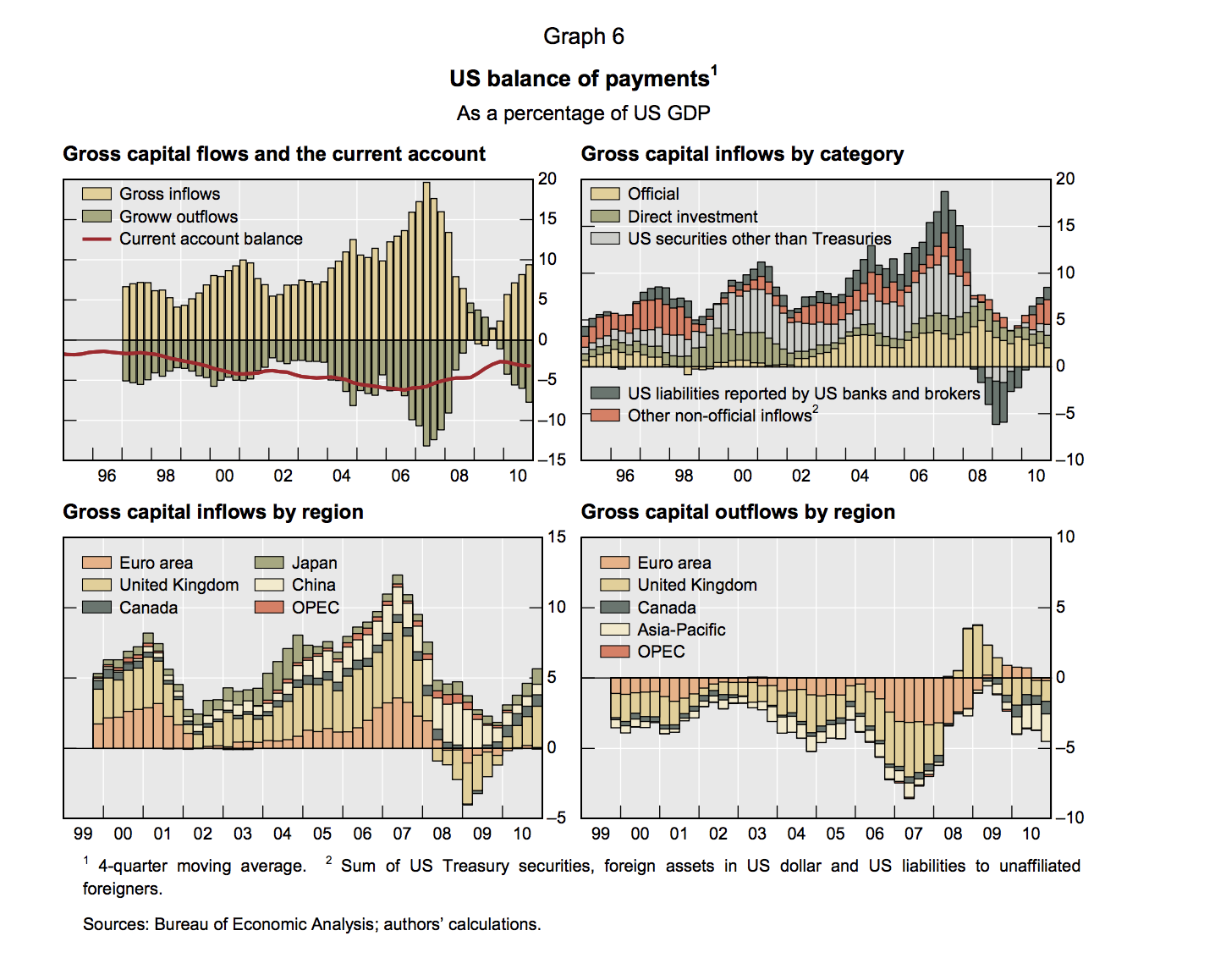 In the gross flow of funds in and out of the United States (bottom two panels), you have to strain to spot the (highly unbalanced) flows relating to America’s trade with China. What dominates the picture are the vast financial flows within the trans-Atlantic banking system. Flows in and out of the City of London, dwarf the flows between the US and Asia. This is the statistical measure of so-called “round-tripping”, with vast quantities of dollars churning between Wall Street and the City of London, often within the balance sheets of US banks with branches in both places.

It is this huge churning flow of money that stopped in 2008, in what could easily have been a terminal heart attack for the world economy.

It is these same flows that would make a financial crisis in China into a serious risk for the UK economy, since the UK banking system (largely HSBC one imagines) has since 2007 built up very large exposure to China. But more on that in a future post on the Sino-UK financial entanglement.

A quick note on the new blog thread:

By rights, this post belongs under the old series “Notes on the Global Condition”, but for the next couple of months I am going to be starting a new series called “Framing Crashed”.

This is in anticipation of the book out in August. 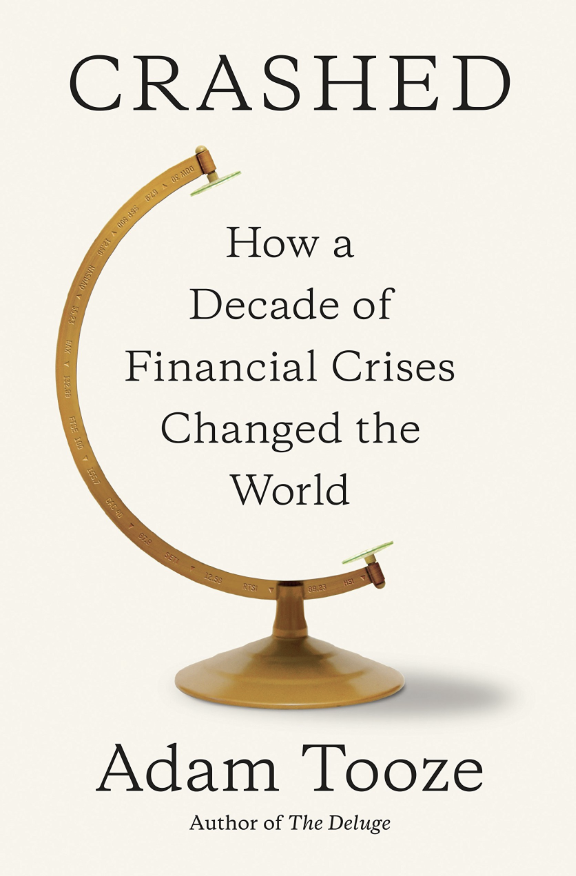 Beyond advertising, this thread will serve an intellectual and emotional function. Crashed turned out to be another big, complicated project. This means that framing it in pithy terms is not easy. In talks and blog posts I find myself again and again trying to find new and slightly different ways to expound the argument and lay out the argument. I want to document that evolving train of thought.

In addition, the size and complexity of the book also means that even with the publishers undertaking heroic efforts the book has taken the best part of a year to get out. This raises the issue of how to stay sane in the interim. Ahead of the release, I am going to use this blog series to think through different angles on the argument(s), worry away at loose ends, and to test the narrative and analytical frame of the book against current events and new material that is appearing all the time.