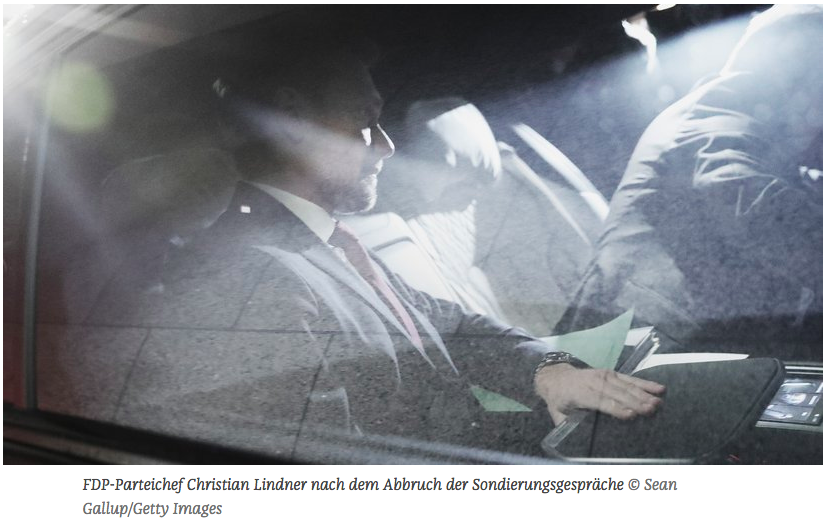 On 19 November 2017 the FDP walked away from the coalition talks in Berlin, declaring that the four-way discussions between the CSU, CDU, FDP and Greens had failed to develop a “common vision for the modernization of our country and above all a common basis of trust.” FDP voters had voted for a “Trendwende” a “turn in the trend”. There was no hope of delivering this with the so-called Jamaica coalition. There was no basis for agreement with regard to education policy, “flexibilization” of society, reinforcing the market economy, or even with regard to an “ordered” immigration policy.

The outcome of the German election in September was inconclusive. But Merkel’s aura remained intact. It took a long time for the reality to sink in. The CDU as well as the SPD had suffered a humiliating setback. Merkel’s only option was the unlikely combination of a  Jamaica coalition. On its face, it was always a tall order. But surely it would succeed. Merkel would find a way. The Greens were keen to govern. The FDP would surely want to find its way back to power.

The collapse of the coalition talks and the fact that it was the FDP that broke them off, leaves a vacuum of power and a whirl of interpretation. Who was responsible for the collapse? Who will benefit? What are their calculations?

The structure of the negotiation contributes to the uncertainty. All governments in the Federal Republic since 1949, bar one, have been coalitions. In the good old days the heads of the parties would have met discreetly to “look deeply into each other’s eyes”. Only after days of these “Sondierungen”, having reached agreement in principle on governing together, would they have moved to detailed negotiations. If those negotiations failed it was clear which issues were at stake and who was responsible. That has not been the case in 2017. Large teams have been involved on all sides, discussing technical details without any prior agreement on the bigger picture. As a result, a vigorous argument is raging over the reasons for the failure, in which the fronts have shifted from an original alignment which pitched the bürgerlich bloc of CDU/CSU and FDP v. the Greens, to one in which the CDU and the Greens are aligned against the FDP. The Greens and CDU are actively working the media to position the FDP as the responsible party for the breakdown, even suggesting that Lindner, the dynamic young boss of the FDP, never intended the talks to succeed.

For some, the news of the failed talks was a cause for deep alarm. What was at stake was nothing less than the stability of the state, or at least the future of Germany’s established party system. “The shadow of Weimar stretches into the 21st century” remarked the FAZ. That seems far-fetched. Schäuble in his new role as parliamentary speaker immediately manned the ramparts. “Germany is currently in an exceptional situation. “It is a test of its resilience, but not a crisis of the state”, Schäuble told the applauding Bundestag. The current situation should not be exaggerated by way of dubious historical comparisons.”

Setting aside the dark shadows of the past, the breakdown of Jamaica is a disappointment for those who saw in it a “coalition of the affluent middle class and upper middle class of Western Germany. As Ferdinand Otto remarked in Die Zeit “Jamaica would be a coalition of educated, better paid West Germans – even if the CDU, FDP and Greens each services a different milieu. It gives one pause in sociological terms. But if one translates it into political, cultural, lifestyle and discursive camps then the Jamaica-coalition brings together the “bürgerliche Mitte”, the middle class and upper middle class center ground.”

Not for nothing, in the wake of the election Clemens Fuest the widely-cited head of the IFO economic research center had rejoiced that the election and the prospective Jamaica coalition had demonstrated that inequality and a lack of social justice were not seen by the majority of the German population as the key issues of German politics. It was time to set aside the themes of redistribution that had preoccupied Merkel’s third government under the influence of the SPD – minimum wage, rent control and improved pensions for stay at home mothers.

There is little doubt that German business welcomed the prospect of the Jamaica coalition. They certainly wanted a new government and are are deeply disappointed that one did not emerge. But the FDP is their party so they have to find excuses. As Neues Deutschland comments: business spokespersons are trying to deflect blame onto the Greens who they accuse of refusing to come to terms with Germany as a location for heavy industry. But, the chamber of commerce could not hide its disappointment that the negotiations had failed. The head of the association of crafts and trades spoke of uncertainty as “poison for business”.

The talks were never going to be easy. There were huge differences over immigration, environmental policy and the question of what to do with Schäuble’s billions in surplus. Tough compromises were reached on the FDP demand to abolish the solidarity tax on higher earners that goes back to the period of reunification – it was delayed until 2021. The Greens agreed that Algeria, Tunisia and Morocco should be recognized as “safe states” to which refugees and migrants can be returned. But in the end the divisions were too deep.

What is striking is how far the entire debate revolves around the agenda of the Greens. Fundamentally the FDP broke from the negotiations because Merkel was opting for a Black-Green agenda with which the FDP could not live. The Greens were in fact willing to compromise on key issue, but for the cheerleaders of the Greens this is not by accident. They have history on their side. They can afford to be flexible because the agenda inevitably comes back to them. A discussion about “future, modernization, digitialization – all the themes around which this government was to be rallied – was bound to revolve around their positions. A player with strong cards has no reason to hide them.“

The FDP by contrast was utterly out of its depth. Having been both out of government and out of the Bundestag since 2013 it lacked expertise. On the crucial issue of environmental policy it lacked sufficient expertise even competently to conduct the negotiations. At the insistence of the CDU, the FDP invited to the table Stefan Kapferer who was state secretary when Philipp Rösler (FDP) headed the Bundeswirtschaftsministerium, had then spent time at the OECD before heading up the BDEW energy industry lobby group. The BDEW represents RWE, ExxonMobil and the major wind farm operators. It was not that the FDP spoke for the lobby, but the lobby actually represented the FDP in the coalition talks. As the FDP explained, the invitation had been issued to the lobbyists at the suggestion of Chancellor Merkel and her chief of staff Peter Altmaier. Perhaps not surprisingly the CDU and the FDP are united in resisting the urgent call from the Greens that Germany should end the practice of electricity generation from highly polluting lignite (Braunkohle).

What next? A minority government? New elections? With or without Merkel?

The ghost that haunts the negotiations, of course, is the AfD. Will it benefit? It doesn’t seem likely. Serving as the right-wing opposition to a Jamaica coalition was their dream. The AfD’s Alexander Gauland has declared the Greens to be the AfD’s ideological main enemy (ideologische Hauptgegner). To have the CDU and FDP bound in a coalition defined by the cultural liberalism of the Western-orientated Greens would have been ideal. Now the AfD  faces the FDP in a real contest for the national conservative vote.

As the FAZ recently remarked the FDP is showing its colors, adopting positions not far removed from those of the AfD on the key issue of immigration. “Lindner may not acknowledge it publicly, but he is the inheritor of the legacy of economic and national liberalism, out of which the AfD was born.” As Danilo Scholz recently remarked, interpreting the position of the FDP between its promise of modernization and its defense of property and entrenched interests is one of he keys to deciphering the current situation. Though more than half the German population disapproves of the FDP’s decision to break up the Jamaica talks, amongst the FDP’s own voters support runs at 64 percent and amongst AfD supporters at 80 percent. Lindner may have a clear idea of where the FDP may need to go, to allow it to dictate terms to the CDU.

Polling is scanty so far. But the evidence suggests that given the chance to vote in a new Bundestag election, the majority of Germans would likely repeat their vote. The only party that currently seems likely to benefit being the Greens.

Those who want to celebrate bourgeois pluralism certainly have plenty to cheer. As they point out, anyone who claims that the main parties in Germany do not offer alternatives need only have spent a few hours watching the coalition negotiations to be disabused of that idea. But the real issue are not the positions of the Greens, the FDP or the CSU. They certainly do offer choices. The issue are the old Volksparteien. The SPD was not at the table in the Jamaica talks and the CDU’s profile was noticeably indistinct.

From the far end of the spectrum the message is clear. The Afd claims to want to govern, but only in a right-wing block for which the CDU would have to abandon the modernization program that has defined Merkel’s course since the early 2000s. This is the mirror image of Sahra Wagenknecht’s call from Die Linke, that the SPD must become a left-wing party before red-red-green can be contemplated. Neither a right wing lurch by the CDU nor a leftward swing by the SPD seems likely. As for alternatives, if we envision four years of a minority government led by Merkel, does the SPD in its current form even have enough ideological ammunition to sustain itself in opposition?

After Macron’s election in May the diagnosis was that “The center can hold”. After the failure of Jamaica, the question in Germany is: can it hold together?