Notes on the Global Condition: The Americanization of Global Capital 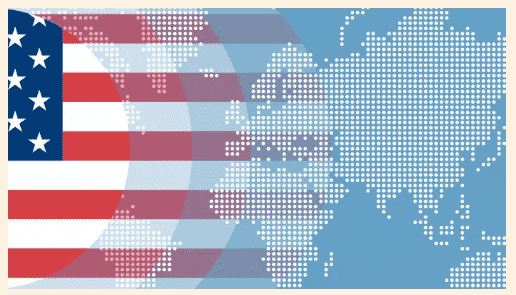 Fascinating story in the FT this morning about surge in US takeovers in Europe. The dollar is strong, the Eurozone is recovering and America’s corporations are using the opportunity to aggressively consolidate their position.

“The largest deals included the $30bn takeover of Swiss biotech Actelion by Johnson & Johnson, and €50bn merger between Italian sunglass group Luxottica and French eyewear company Essilor. The activity has shown no sign of slowing, with US paints and coatings maker PPG continuing to stalk Dutch rival Akzo Nobel after a $23.7bn unsolicited offer. The deal activity would have been even greater if Kraft-Heinz, the US food group, had succeeded in its aborted $143bn takeover attempt of Unilever. The Anglo-Dutch consumer goods company, however, fended off the US group’s offer, which was backed by Brazilian-backed private equity firm 3G and Berkshire Hathaway’s Warren Buffett.”

An American takeover of Unilever would truly be a historic deal. Unilever is one of Europe’s most significant historic multinationals. It would mark a new bridgehead for US capital in Europe, a new phase in the “Americanization of global capital”.

I take the phrase from the illuminating work of Sean Starrs, which I’ve been reading a lot of recently. Starrs is a highly active young scholar out of the York University school of political economy (Panich and Gindin) doing great work on capital, the state and global power structures.

Starrs makes a series of simple, but important analytical moves and then follows through with some really illuminating work on the descriptive statistics of global capitalism.

The key moves are:

(1) In a world of globalization, mapping the world economy and its power centers using GDP numbers is likely to be misleading. In particular, it is misleading to derive from global GDP shares the hasty conclusion that American economic power is waning.

(2) The real vectors and agents of global capitalist development are corporate actors. There are lists of all the key corporations in the world for all sectors. We should use them. Starrs focuses most of his work on the Forbes Global 2000, which is available from 2006. One might hope to widen the investigation to the larger group of 50,000 or so that UNCTAD and others identify, as key to global value chains.

(3) Focusing on the global corporation does not imply that states do not matter. It does not imply that there is a single uniform transnational capitalist class. Capital develops in complex relationships with states, which themselves exist in a complex and hierarchical network of relations with other states. And in 21s century, states are very powerful economic actors in the corporate sector. Here Starrs aligns himself with Saull, whose excellent Gramscian essay of 2012, “Rethinking Hegemony: Uneven Development, Historical Blocs, and the World Economic Crisis”, is given prominence also by Anderson in his forthcoming H-word.

(4) With these three steps in place we can clearly identify the unique significance of the American state-capital nexus in the 20th-century and 21st-century world.

None of this is rocket science. But it is a matter of avoiding pitfalls, keeping the full analytical framework in view at all times and then following through with some truly interesting empirical work.

In the NLR and elsewhere Starrs has put together summary tables which show continuing US corporate dominance across most of the key sectors of the world economy. These are straight-forward reworkings of the Forbes Global 2000 listing.

It begins to get really interesting when Starrs brings in data for corporate takeovers. These show that the US is by far the most aggressively expansive corporate actor.

Liberalization and “opening up” of financial markets provide spectacular opportunities for US corporate expansion.

What is even more interesting is that Starrs then links his data for the Global 2000, to data for share ownership, which you can access through “professional-grade” business info terminals, like Bloomberg etc. These are widely available on campuses through business school libraries. But hardly anyone in the humanities/critical social sciences (myself included) ever uses them. Starrs’s results are really eye-opening.

It is not just that many obviously American companies dominate their sectors, but firms that appear to be European, Asian, Australian actually have large and in some cases controlling American ownership. For example, if it is hard to buy into China directly, the next best thing is to buy into the Australian mining companies that supply China. So Starrs finds that “American firms own a combined 68% of the Australian-domiciled BHP Billiton for example, which in 2012 has a stunning 14% profit-share in the $172 billion Forestry, Metals and Mining sector. More broadly, American firms own 46% of the world’s top 500 corporations (despite “only” 33% of the top 500 with US-domicile), which is almost six times greater than its nearest competitor, Japan. And note the asymmetry of cross-ownership: While the American share in many non-American corporations reaches 20% or more, the total combined foreign share of top American corporations is usually no more than 15%. Americans own much more of the world than the rest of the world owns the United States, and this asymmetric interdependence leads to asymmetric power. Perhaps one of the clearest manifestations of this is that American citizens continue to own the dominant share of global wealth at 40% or more, despite the global share of US GDP steadily declining over the past half-century to less than a quarter since 2008. Lying in between is the 36% American ownership of Gazprom (versus 64% Russian) and the 28% American ownership of Samsung Electronics (versus 63% Korean).” Yup, thats right, at the time of writing, Americans owned 36 % of Gazprom!

In another review essay, Starrs gives these remarkable numbers for Australia in 2016. Note how quickly the data on share ownership shift. 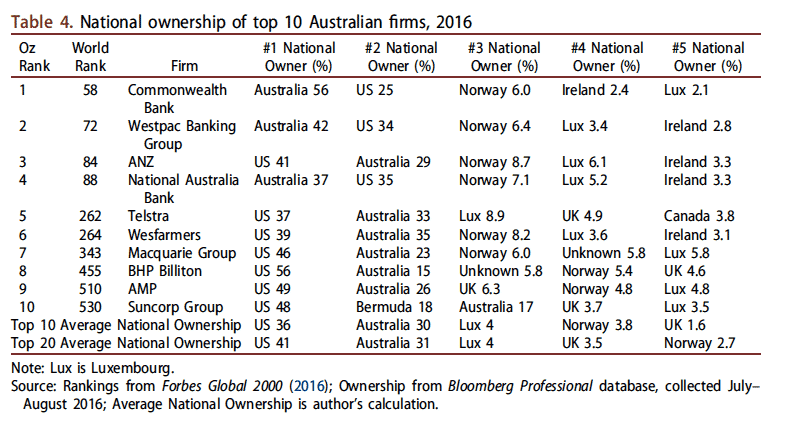 There is more I haven’t read yet. Looking forward to the (2014) PhD and there is an essay about state theory I’ve only just laid my hands on. Starrs, Sean (2014) State and Capital: False Dichotomy, Structural Super-Determinism, and Moving Beyond in The Capitalist Mode of Power: Critical Engagements with the Power Theory of Value Tim Di Muzio, ed. New York: Routledge

From starting points like this, it seems to me that there are two steps we urgently need to make:

(1) how on earth do we grasp the relationship between the massive dominance of the US state-capital complex in the global system and the current American domestic scene? Obviously, this is the question everyone is thinking and writing about. Focused as he is on his illuminating exploration of corporate capital Starss is rather reticent on this score.

(2) anatomizing the world system in terms of the key corporate actors, does not, it seems to me, evacuate the need for an economics. The problem is to specify what an economics means once we set aside the conventional macroeconomics along with the GDP numbers. Aggregate variables like unemployment, inflation, GDP were all part of the “national economy paradigm” of the mid-century, the framework which is now, in crucial respects, profoundly misleading. It is precisely here that we see the crucial significance of developments in areas such as “macrofinance”. What we need urgently to do is to explore the relationship between the critical political economy that Starrs and others are outlining and the kind of work that the BIS is doing on bank balance sheets. As a sampler I would recommend this BIS manifesto on “breaking free from the triple coincidence”. From the abstract:

“The traditional approach to international finance is to view capital flows as the financial counterpart to savings and investment decisions, assuming further that the GDP boundary defines both the decision-making unit and the currency area. This “triple coincidence” of GDP area, decision-making unit and currency area is an elegant simplification but misleads when financial flows are important in their own right. First, the neglect of gross flows, when only net flows are considered, can lead to misdiagnoses of financial vulnerability. Second, inattention to the effects of international currencies may lead to erroneous conclusions on exchange rate adjustment. Third, sectoral differences between corporate and official sector positions can distort welfare conclusions on the consequences of currency depreciation, as macroeconomic risks may be underestimated. This paper illustrates the pitfalls of the triple coincidence through a series of examples from the global financial system in recent years and examines alternative analytical frameworks based on balance sheets as the unit of analysis.”

INET has for years been an invaluable hub for this kind of work. There is an obvious affinity to the monetary economics of Perry Mehrling. For one of the more recent papers to come out of that school see this by Ban and Gabor. I’ll do a review on the blog shortly.