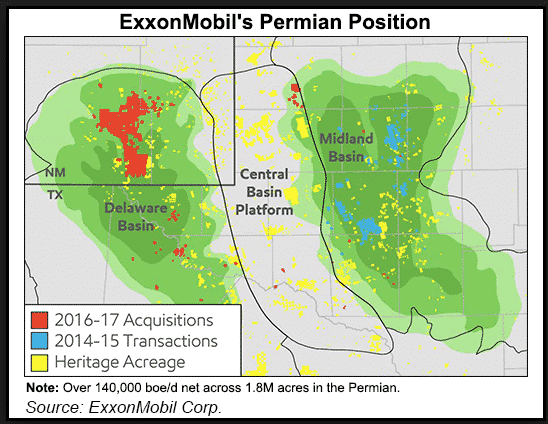 If there is a recent experience that inspires visions of the resurrection of American industry, it is the story of fracking which has transformed the US energy sector and threatens to do the same to the global oil industry. By establishing the US as a low cost and highly flexible competitor, capable of rivaling OPEC it is likely to drive down oil prices globally with huge implications.

There is a new competitive dynamic in the industry in which ultra low cost Gulf producers compete on volume with the flexible and small-scale American production units that come on stream  whenever prices hit critical thresholds. 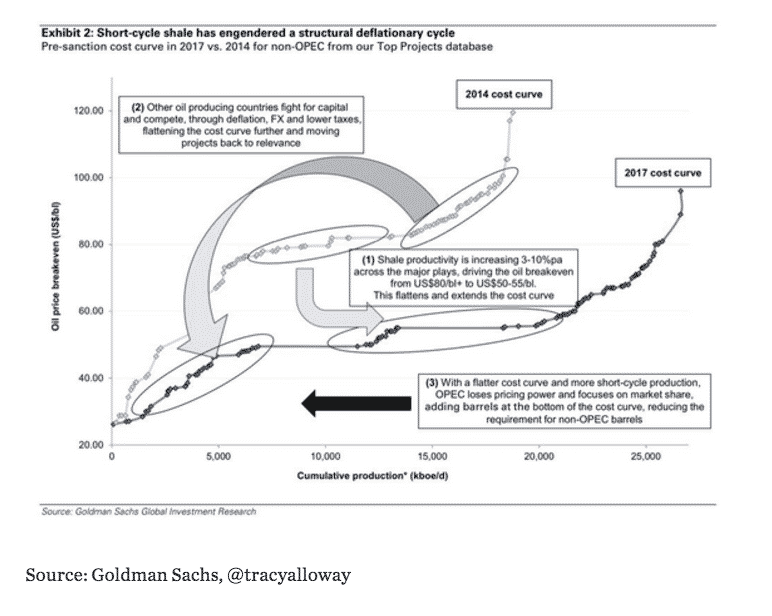 One of the transformative characteristics of fracking production is that it is highly elastic. 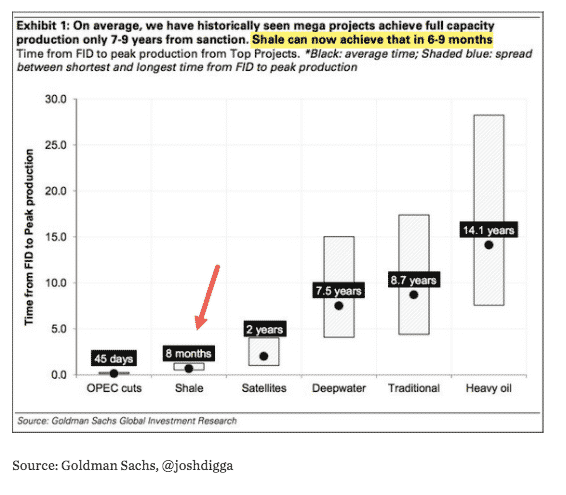 Fracking has affected the local economy and environment in many places across the US, but what I did not realize until I started digging, was that fracking as a macroscopic  changing the world, is a story of one region in the US, the West Permian shale oil and gas basin in West Texas.

West Permian is one of the classic regions of US oil production. Since 1921 it is estimated that a staggering 29 m barrels of oil have been pumped out of the ground there. In the 1970s and 1980s it was the classic terrain of “Texas oil men”. It then lapsed into prolonged stagnation as global oil prices in real terms slumped. But the combination of the oil price surge to 2014 and the advent of new horizontal drilling and fracking technologies has again transformed the region. It is the one region of the US to experience sustained and dramatic increase in production. And at 2 m barrels per day West Permian is now second in the world only to the largest Saudi field, Ghawar which pumps up to 5 m barrels per day and is responsible for c. 5 % of global production. 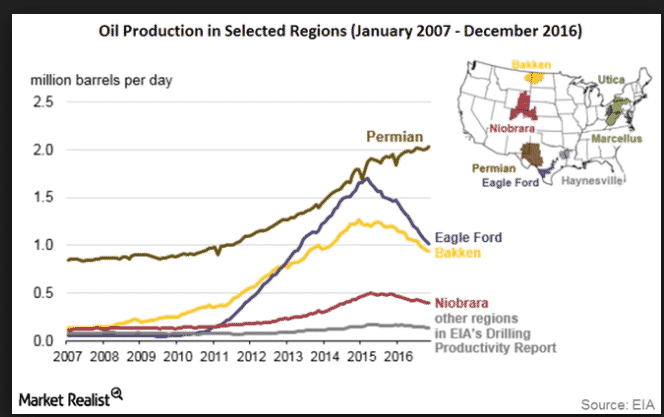 The boom-bust cycles of 2000-2014 have left a legacy of hundreds of drilled but uncompleted wells that could be rapidly brought into production if prices in global oil markets continue to recover. 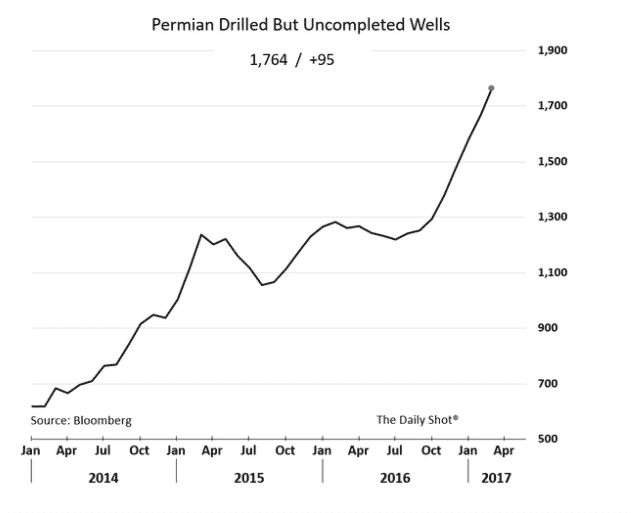 The industry is environmentally ruinous and may in due course run up against a major constraint in the form of the limited water supply. The Permian basin is an area of massive water stress. Business friendly Texas regulation gives the industry no reason to recycle. But even if they were to start using brackish water they may soon be competing with human drinkers in places like Odessa and Abilene.

The story of fracking is conventionally told as one of maverick capitalist pioneers breaking the mold. As Permian builds out there are still hundreds of companies trying their luck. But it is preeminently a business of land ownership and that requires huge capital and connections. In the last few weeks EXXON purchased a chunk of land for over $ 6 bn. Not surprisingly, therefore, 10 key producers account for 50% of the basin’s output and just five large players control the key real estate. These were the data as of the fall of 2016, prior to another wave of investment and consolidation in which EXXON was a key player.

The question that really excites the industry is how much oil there is in the West Permian. Permian boosters think that the figures may be spectacular. “According to analysis from leading Midland Basin producer Pioneer Natural Resources (NYSE:PXD), the Permian could hold nearly 160 billion barrels of oil equivalent (BOE) recoverable resources, which rivals of Ghawar’s estimated 160 billion BOE.” Estimating oil reserves is a science that is inextricably tied up with the business of attracting investment capital and should be taken with a pinch of salt. But in the last 6 months there have been truly epic discoveries across the previously unfavored Delaware segment of the the West Permian field, which suggest that the ultimate capacity of the field may indeed be huge.

At the center of excitement is the Wolfcamp “play”. In November the US Geographic survey confirmed the “The Wolfcamp shale in the Midland Basin portion of Texas’ Permian Basin province contains an estimated mean of 20 billion barrels of oil, 16 trillion cubic feet of associated natural gas, and 1.6 billion barrels of natural gas liquids.” This is the largest continuous oil assessment ever identified by the USGS. Three times larger than it previous largest. And it is confined, initially, only to the Midland section of the Permian field. The Wolfcamp shale extends west from the Midland section and Prospectors are now scrambling to identify new oil oil in the Western, Delaware field of the Permian basin. 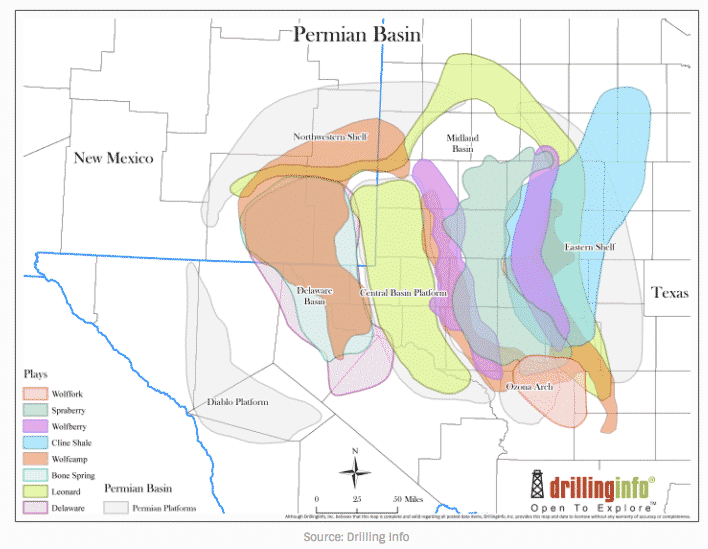 EXXON which had previously been slow to get into the fracking business has now made a major play by acquiring a huge plot of Wolfcamp shale land in New Mexico in the Delaware section for $ 5.6-6.6 bn from the Bass family of Texas. In 2016 the Delaware section of the West Permian field was the center of the $ 69 bn merger and acquisition wave in oil and gas. 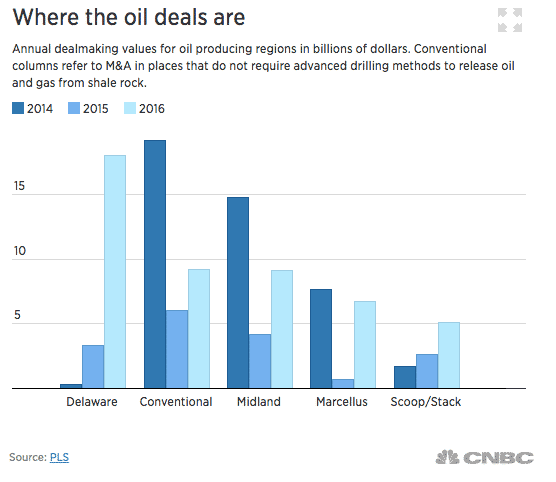 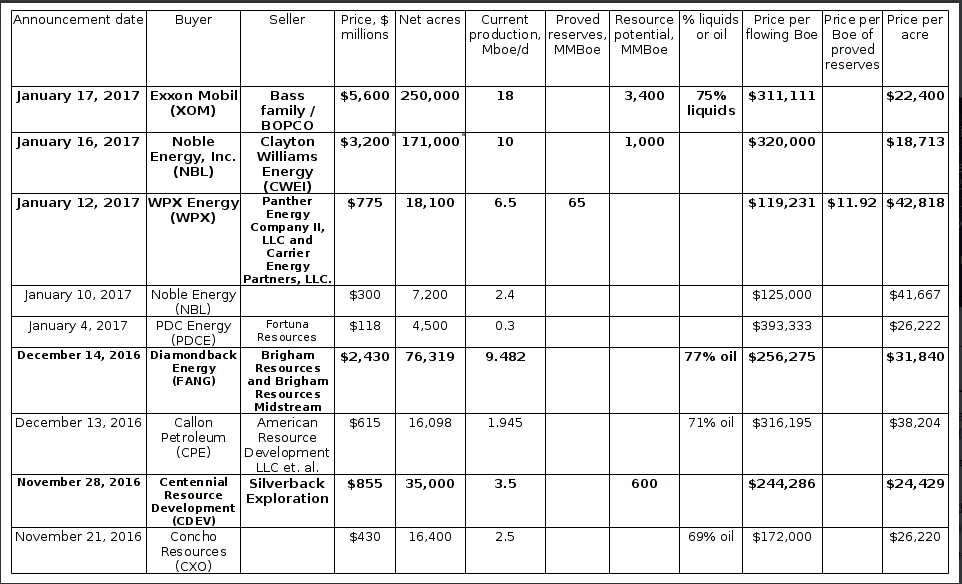 With Tillerson moving from EXXON to state, the EXXON investment in low-cost, flexible, domestic US production as opposed to the high-cost, long-term investments in which Tillerson specialized is seen my some in industry as a paradigm shift. The company has been under serious pressure from the global decline in prices. A large shale gas acquisition in 2010 ended up suffering large losses and had to be written down. Exxon is known as the fiercest competitor on costs and it has made huge strides in cutting horizontal drilling costs: “Since 2014, the company has drilled 174 horizontal wells in the Permian, and it boosted results by running longer lateral lines and making other improvements. Total development costs were reduced 72 percent and cash expenses in the field fell by almost half, Woods (CEO) said. Exxon’s drilling and completion costs are 19 percent lower than the peer average, the company reported. It now has a research team working to maximize the length of the horizontal lines and transfer lessons to other fields. ….Exxon has over 7,000 drilling locations that provide good returns at $40 a barrel for oil and $2 per thousand cubic feet of natural gas. If those commodity prices hit $60 and $3, respectively, Exxon’s inventory grows to over 24,000 good locations, Woods said.” 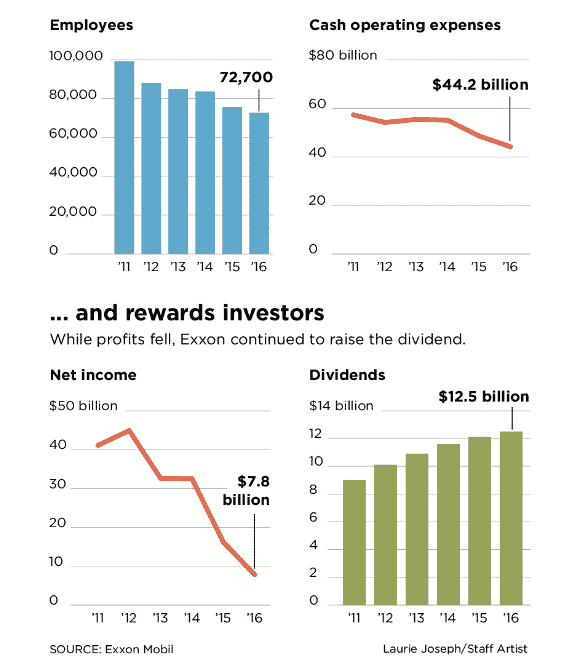 It would be reductive to insist too strongly on the parallels between the new direction of US foreign policy and the positioning of one of its most significant corporate players. But it is striking nevertheless to read this language: “Exxon, whose corporate headquarters is in Irving, is best known for tackling giant projects in difficult environments. It can spend years to bring in oil fields in deep water, arctic conditions and developing nations. In contrast, wells in U.S. shale rock can be started quickly — and stopped if prices fall. Exxon calls these “short-cycle” investments because they’re expected to generate positive cash flow in less than three years. Through the end of the decade, short-cycle plays will get over half of Exxon’s capital spending on the upstream business, Woods said. That’s a significant increase and Exxon has been gearing up for this. ….Woods started his career at Exxon in 1992 and was named CEO after Rex Tillerson agreed to become secretary of state in Donald Trump’s Cabinet. The analyst meeting was Woods’ first major appearance, and he was asked whether the short-cycle focus was a paradigm shift. The corporate philosophy has always been to find the best opportunity, he said.  Now the industry is in extraction mode, not discovery mode, and in shale, Exxon can “extract more value than we think our competitors can,” Woods said.”

PrevPreviousThe Birth of Bailouts From the Spirit of Vietnam: The Financial Powell Doctrine, Larry Summers & the Military-Economic Intertext
NextNotes on the Global Condition: The Americanization of Global CapitalNext
related posts