Notes on the Global Condition: Women in Informal Employment (WIEGO) and the the global effort to map the informal sector

The concept of “informal” employment turns out to have been “discovered” or “introduced” by the British anthropologist Keith Hart in his fieldwork in Ghana Accra in 1971-1973. It was then emerged as key organizing concept from “The first ILO World Employment Mission was to Kenya in 1972. It was a response to the problem diagnosed by the late 1960s of an “unemployment crisis” in the developing world.

The mission team found that the traditional sector had not just persisted, but had expanded to include profitable and efficient enterprises as well as marginal activities (ILO 1972).” It was clearly disruptive to conventional assumptions about economic modernization.

Question: Has anyone written about this remarkable moment in the late 1960s-early 1970s in an extended fashion? Unemployment as a problem of development? The informal economy? Paging the “history of development crowd” …

An invaluable resource for exploring the informal economy as a global phenomenon is the Women in Informal Employment: Globalizing and Organizing initiative. They have a fantastic web presence and a truly remarkable range of data.

After the original breakthrough in the early 1970s, structuralist work took up the informal sector in the 1980s arguing that “The informal economy became a permanent, albeit subordinate and dependent, feature of capitalist development (Portes, Castells and Benton 1989).”

The data collection effort was driven forward by successive meetings of the Conference of Laour Statisticians hosted by the ILO, with crucial meetings in 1993 and 2003 helping to refine the statistical classification scheme that I was getting so excited about yesterday. In 1993 they first attempted to define the informal sector. In 2003 they introduced the distinction between employment status and place of work that I was so pleased with yesterday. Studies began all over the world including sample surveys in 6 major Chinese cities. Since 2008 they have been trying to incorporate the informal sector systematically into the SNA economic accounting framework, allowing one to estimate the “economic contribution” of the sector and these workers.

The result are compilations like the one below that give a dramatic global overview of the importance of the sector and its gendered make up. From these, India emerges as extreme but by no means exceptional. 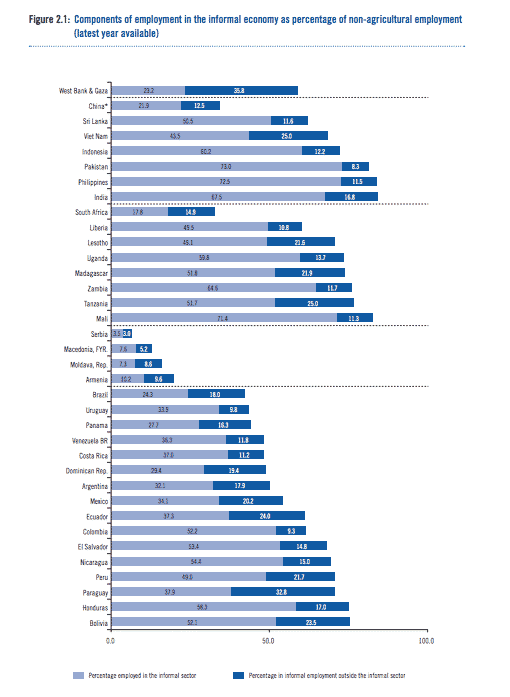 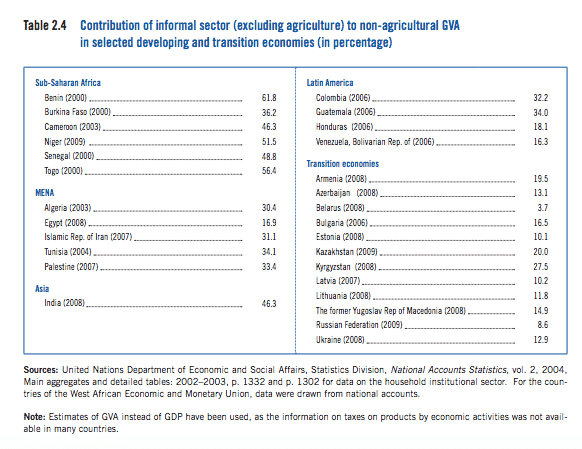 Given the size of the sector in terms of labour force it ought not to come as any surprise, but it is worth stressing the point. Right now in the fastest growing large unit in the world economy, India, 46.3 % of gross value added is generated in the informal sector!

They have also done fantastic work in identifying particularly important informal occupations such as domestic workers, homeworkers, street vendors etc and allowing us to understand their significance in relative terms. 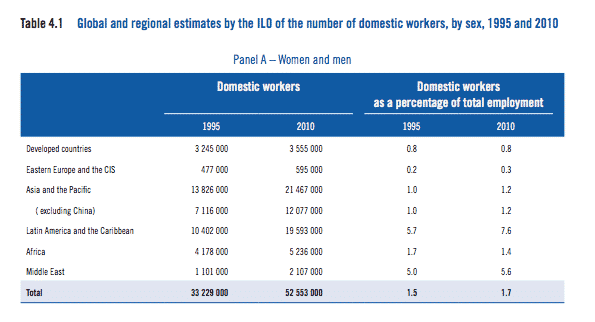 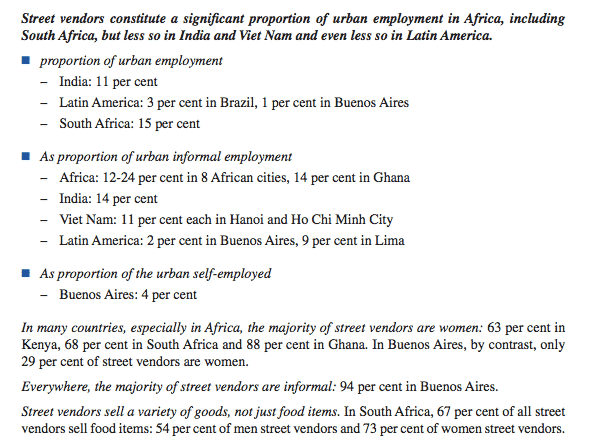 But to give an idea of the riches to be found at the WIEGO website, check out this report on Durban Street Traders: http://www.wiego.org/sites/wiego.org/files/publications/files/StreetNet_Durban_Street_Traders.pdf

Or this short report on the remarkable findings from Brazil’s statistics on garbage pickers:  “All types of waste pickers (from PNAD): • waste pickers number 229,568 • 67 per cent are men and 33 per cent are women • 25 per cent are 50-64 years and 7 per cent are over 65 years • only 14 per cent of men and 6 per cent of women attended school • approximately 4.5 per cent have a formal contract. CEMPRE,7 a not for profit association dedicated to promoting recycling within the context of integrated waste management in Brazil, published data8 showing nearly 92 per cent of aluminium and 80 per cent of cardboard in Brazil was recycled in 2008. The organization’s database, Ciclosoft 2008, also shows that only 7 per cent of municipalities have implemented official source-segregation schemes. Thus the high rates of recycling are achieved mainly by waste pickers (be they organized or non-organized) working outside municipal recycling programmes.” http://www.wiego.org/sites/default/files/publications/files/Dias_WIEGO_SB2.pdf

WIEGO is clearly acutely aware of the politics of classification – De Soto/Maloney v. more critical approaches. They attempt to sidestep the debates by adopting what they call a “holistic approach”.  http://www.wiego.org/informal-economy/informal-economy-debates-dominant-schools-thought

And also, interestingly, through the application of logic chopping and statistical techniques to the question of statistical classification itself. What difference does it make whether you adopt one classification or another, is a question that is political, but it is also a question you can answer in quantitative terms. Since surveys are expensive and we can ask more questions if we do it efficiently, it makes sense to ask the questions that discriminate most effectively. 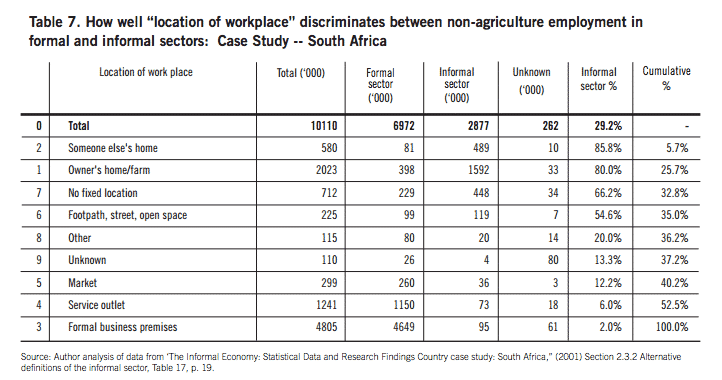 PrevPreviousNotes on the Global Condition: India’s Informal Capitalism Under Pressure
NextExplaining Brexit and Trump: Search for a MethodNext
related posts