Notes on the Global Condition: India’s Informal Capitalism Under Pressure 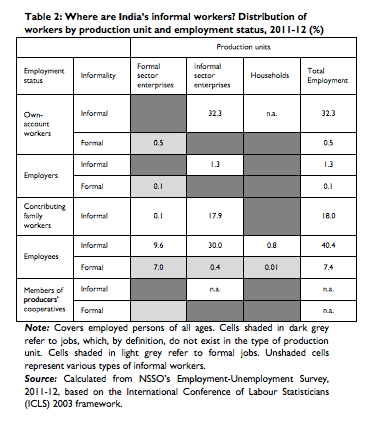 Refereeing a bold paper that attempted a transnational history of the precarity of employment in Germany and India since 1945 (sic), I was prompted to look for an overview of the modern Indian workforce. This lead me to this beautiful little piece by the ILO.

What is wonderful about this table is that it cross-references the entire Indian working population. I believe in this particular table it includes both agricultural and non-agricultural workers. It divides them by employment status (employer v. employed etc/formal v. informal) with place of employment (formal  firm, family business etc). To be in labour statistics heaven all we would need would be data on occupation (mechanic, cleaner, vendor (cigarettes) etc).

It took European statisticians until the early 1920s to work out the significance of these three distinctions – occupation (Beruf), employment status (worker v. employer), place of work (workshop, factory) and to implement them in national censuses. Ideally, one would even want a fourth distinction that pertains not so much to the labour market as to the economic question of who owns the workshop or factory. Is the production unit stand alone, or is it one part of a gigantic corporation like Tata? (I’ll do a blog post shortly on the genesis of this ILO grid)

These kind of distinctions are not just a matter of statistical obsession. They are of huge significance politically. They describe what kind of social structure you are in. For this reason they became the object of a furious debate within German social democracy around the turn of the century between Bernstein and Luxemburg. Depending on how you break down or don’t break down the numbers, the economy can appear either mainly artisanal (Bernstein) or mainly proletarianized (Luxemburg). Interestingly, Sombart ever the modernist, sides with Luxemburg.

A hundred years on, in 2011, the data for India are staggering. In an economy of 472 million working people  (agri and non-agri), the world’s most rapidly growing economy, the powerhouse that is expected to replace China as an engine of economic growth, only 7 % of workers are employed in formal employment contracts in formalized businesses. Another 9.6 % work as informal labour in the formal sector. By far the largest group are owners and family helpers in informal businesses c. 50 % of the total. And those businesses employ another 30 % of the workforce on a casual basis. It is one gigantic, law-defying, informal economy.

The data don’t come as a total surprise, if you have ever had the chance to be in India, especially the rural bits. But the numbers are nevertheless remarkable. A 7 % share for regular formal labour in formalized workplaces is a staggeringly small number.

The comparison with Europe is stark. But perhaps more interesting would be a comparison over time with China, say since the 1950s. (China turns out to be a truly explosive topic).

Trying to figure out what this table is and what it is not referring to, I came across another excellent descriptive paper on the social structure Indian workforce, which is based on the census for 2011. (Venkatanarayana & Naik 2016) It paints a far more dramatic picture than the restrained commentary from the ILO. What these scholars from Hyderabad identify is what potentially could develop into a structural impasse in Indian development. 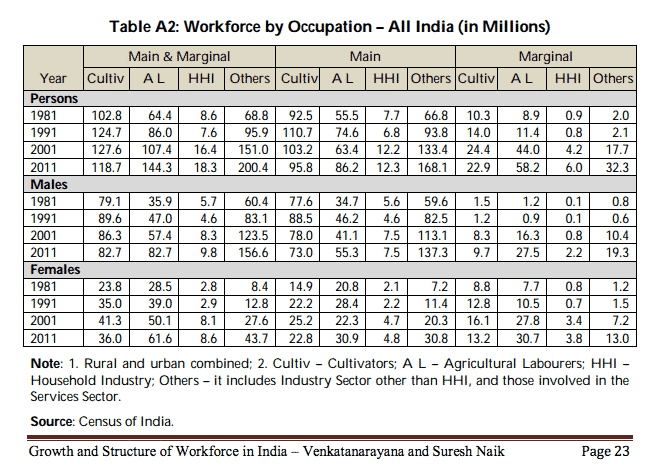 There are three dramatic trends in this table:

1. the huge increase in non-agricultural employment, of which 83% is informal and 68 % is in informal enterprises outside agriculture.

2. The increase in agricultural laborers as a share of the rural population.

All of these might be thought of as symptoms of a rapidly growing capitalist economy which is also experiencing huge population growth and mass migration to the cities.

But what worries Venkatanarayana & Naik is the trend. The rate of growth in the fully employed non-agricultural workforce is sharply slowing down. The shift between the census of 1991 and 2001 was truly dramatic. Since then the share of non-agricultural workers in the total has only inched up.

Their summary: “The grand theory of development says that the growth of industry will absorb the surplus labour in agriculture to the extent that the wage differential between agriculture and industry diminishes to zero (Lewis, 1954). Given a significant and distinctively high growth of non-agriculture GDP in India, particularly during the last decade, one would have a reason to expect a further high growth of workforce too in the non-agriculture sector than the rate observed. The reality is in contrast to the expectation. It indicates a glitch in the structural change of workforce. It could be because of growing base of the capital-intensity in the non-agriculture sector reducing rate of labourforce absorption. Given the low levels of education and skill of workforce in India, there prevails a shortage in supply of skilled labourforce that industry demands. The recent report of Mckinsey on education and employment points out a conundrum – i.e. there are people who can’t find jobs and there are employers who can’t find people with the necessary entry-level skills (see McKinsey, 2013). Therefore, the industry prefers the capital-intensive technology that replaces the human labour requirement. The growth of otherwise labour-intensive industry must be very low and decelerating, as it is observed in India. On the other hand, if the labour-intensive agriculture had relieved the surplus labour (whose marginal productivity of labour was zero) over time and it is reached a stage where it cannot afford further migration of labour – out of agriculture to non-agriculture. The emerging phenomenon of ‘labour shortage’ in agriculture and the growing agricultural wages rate in the recent past might be the indications.”

If skill shortages lead firms investing in India down a capital-intensive route at an “early” stage, the capacity of economic growth to absorb workers at modest but rising income levels will be reduced.

What one sees emerging from this data is a bad version of the Lewis model, in which rather than super rapid growth being driven by the absorption of low productivity agricultural workers into industry, you have a three way segmentation: a high-tech, high-skilled, high-income segment (to put it crudely, the 7 % in formal jobs in the formal sector); an urban, low-skill, low-income, informal economy; a rural society divided into labour- and capital-starved family farms and households dependent on proletarianized agri labour.