Explaining Brexit and Trump: Search for a Method 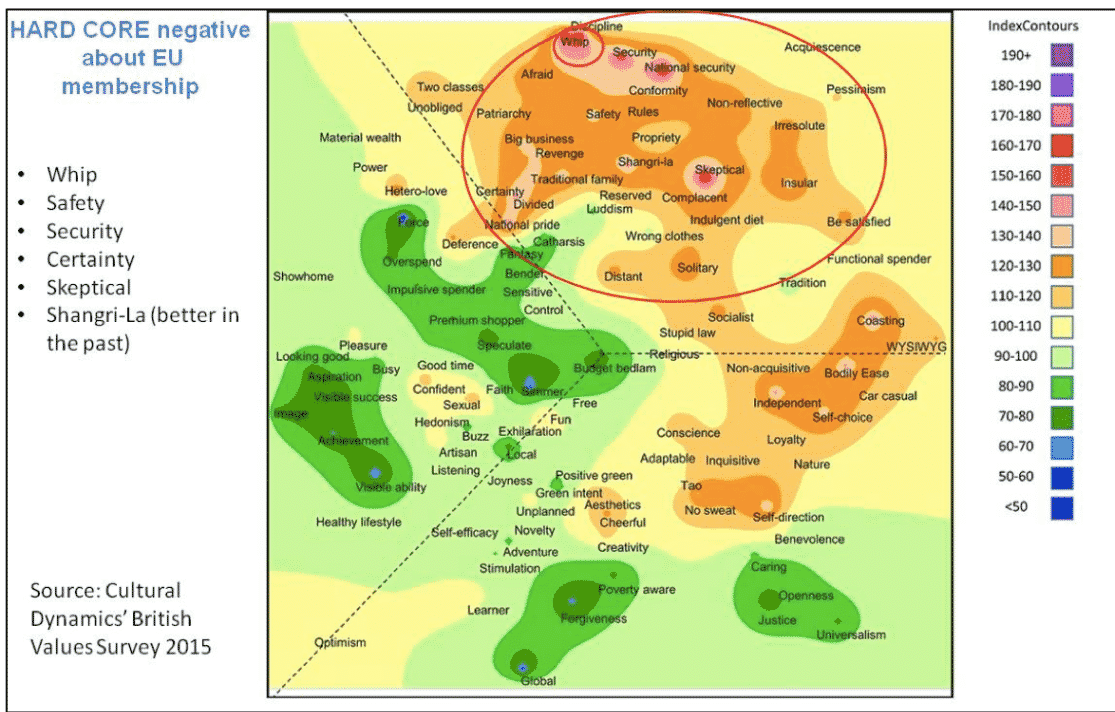 In the ongoing struggle to make sense of the events of 2016, Brexit, Trump etc, a debate has emerged between those who emphasize economic stress, regions of deprivation, fears of economic decline, the impact of austerity etc. and those who emphasize issues of identity such as race, nativism, nationalism, and generational cohort. The variable of education sits between the two because it is clearly determined by economic and social situation, it influences economic opportunities and it shapes (we assume) outlook and responses to current events, crises etc. Below-average education, everyone agrees, is one of the variables most closely associated both with Trump-voting and Brexit-voting. Graduate education or above biases towards Clinton and Remain. In the US case, in this election, it even overrode race and income.

In general the evidence is fairly compelling that the statistical association between markers of racial identity, nationalism etc and Brexit and Trump voting is stronger than is true for being “left behind” in economic terms, economic deprivation, class background, family income. So does that mean that the “nativists” i.e. the cultural/values-based explanations have won the argument?

The smart response whether from Richard Seymour (Marxist Left) http://salvage.zone/online-exclusive/whats-the-matter-with-the-white-working-class/ or Martin Sandbu (pro-Euro economics commentator at the FT) https://www.ft.com/content/eb9a729c-ab18-11e6-9cb3-bb8207902122 is to insist that the distinction is false. Obviously, racism and nationalism can function as (distorted) ways of making sense of situations of economic stress. As Sandbu points out, when pollsters ask questions that are supposed to identify nativism or a fear of “racial competition” they tend to situate those questions within an imaginary context of scarcity or economic stress.

This makes sense. But does it really allow us to address the argument for “values” when we move from questions of immigration to “deeper” value questions?

One of the most striking results is the astonishingly strong relationship between authoritarian attitudes, as measured by attitudes towards the death penalty, and Brexit voting. For the argument see this punchy short piece by Eric Kaufmann. http://blogs.lse.ac.uk/politicsandpolicy/personal-values-brexit-vote/

The statistical relationships are remarkably strong, only marginally less strong than the association between Brexit voting and racialized nativism. Both override any economic variables. Whether you favor the death penalty is far more important in determining your attitude to the EU, at least in statistical terms, than your income level. 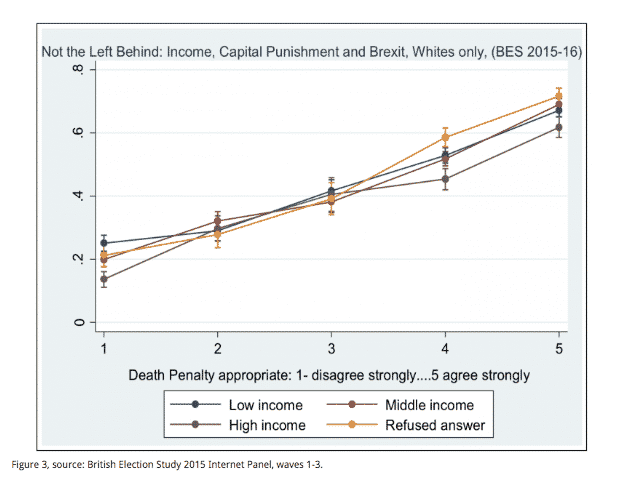 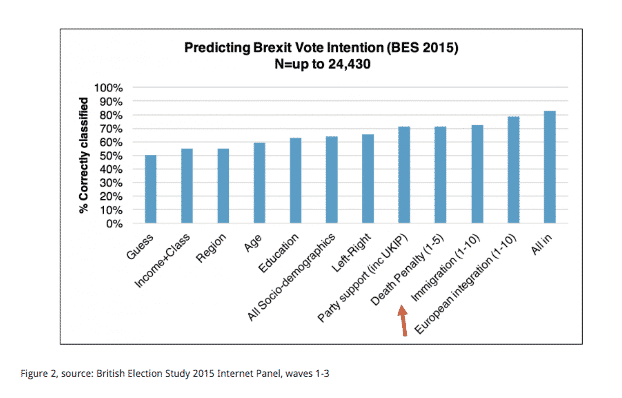 But, and this is the crucial point, it is not obvious how attitudes towards the death penalty can be tied back to economic stress, in the way that attitudes towards migration may be. Instead, a preference for the death penalty would seem to be connected “laterally” to a variety of other authoritarian attitudes. Because of their uses in marketing this kind of cultural mapping is actually a business. And the results of these exercises suggest a clear location for Brexit/anti-Eu sentiment in a field of values which include skepticism, pessimism, security, national security an publicly whipping sex offenders (yes, somebody did ask that question!). The hanging, flogging, castrating set hates the EU and those attitudes unite a segment of society that is not clearly defined in terms of location, social class or income level. This striking graph comes from Pat Dade at Cultural Dynamics. Their methodology derives ultimately from Maslow.

Of course, one can make a general argument that those holding these kinds of view have been “left behind too”. But what they have been “left behind by” is not economic progress as such, but some broader process of civilizational improvement. Modernization is always a bit hit or miss. It pertains to averages. Not everyone catches the bus. The hanging and flogging brigade tend to be older. Only a fraction of their children inherit their attitudes. So perhaps, (hopefully) they are destined to die out. This is the kind of view advocated since the 1970s by Ron Inglehart and he has weighed into the Brexit/Trump debate with a major paper together with Pippa Norris.

Their sophisticated statistical testing of a huge panel of socio-economic and cultural variables confirms the conclusion suggested by the “death penalty” data. Education matters. But it is not obvious that the economic crisis as such, or any other immediately acute crisis has been driving the upsurge in right-wing populism across Europe. They also find that across Europe “petty-bourgeois” class position is far more likely to predispose to support right-wing populists than any other social position. 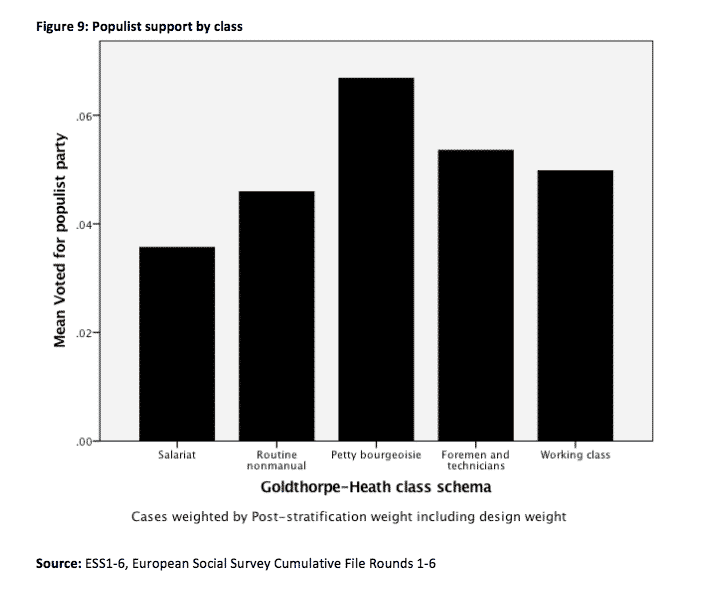 Inglehart, is a die hard modernization theorist. So he would insist on long-term connections between economic development, affluence and liberal postmaterial values. But this is a very different kind of socio-economic determinism than the one usually invoked to explain the current surge of radical right politics. And it would seem to me that the Polanyians should concede some major modifications to their crisis model. How exactly one might modify the Polanyian model, I will need to write a separate post. The trigger of immigration, after all, can easily be squared with a basic Polanyian position. It is the model of cultural development, or lack of it, that is the problem. Why do some people react to globalization protectively and not others and does this reduce to sectional economic interests and exposures to competitive pressure?

Perhaps ironically, all of these findings pose far less of a problem for the kind of Marxism that someone like Richard Seymour is trying to articulate. If the main aim is to identify what role social classes and in particular the working class have played in the crisis, it must come as something of a relief (and perhaps as no surprise) to discover that Brexit and Trump voting are really being driven by other forces. Of course, in complex ways, those “other” cultural, political and emotional forces may relate back to social structures of power ultimately rooted in the forces and relations of production. But when it comes to Brexit and Trump the more mediated the better! Contrary to the Davos-set and their kneejerk insistence on “white working-class” culpability, one can point to the usual suspects i.e. petty bourgeois authoritarians, pensioners nostalgic for the 1950s etc. The workers that were lost to UKIP or the Republicans were lost a decade back (at least).

Indeed, one might go further. As Gramsci formulated at the beginning of the 20th century, and Sartre would repeat in the 1950s (Search for a Method), the indispensable role for Marxism in the intellectual force-field of the 20th century, was to offer a way out of the unproductive opposition between economic sociology’s crude determinism and psychologism (Gramsci had voluntarism in mind, Sartre targeted the disembodied “personality types” of social psychology). Or course, naming the problem is not solving it. And pulling off that dialectical supersession is anything other than easy. But, if the current debate is anything to go by, the challenge that sophisticated Marxism posed to the 20th century remains with us today. 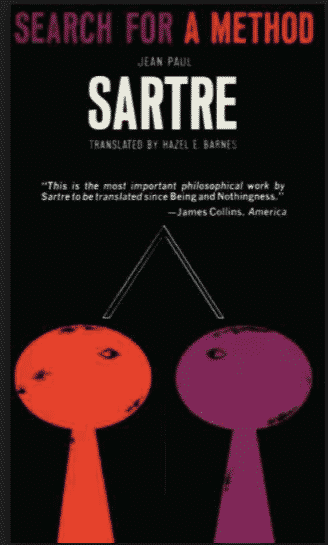 If there is a weapon that symbolizes the war in Ukraine, it is the FGM-148 anti-tank infrared guided missile also known as Javelin. Images of

The shift in Western discourse on China over the last five years has been dramatic. Trade wars, tech wars, COVID, Xi Jinping’s crackdowns, the real