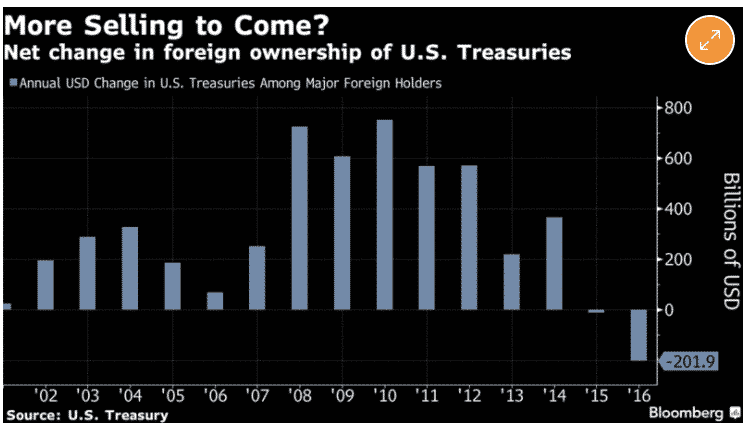 A lot of questions out there today about future of the dollar as reserve currency in light of recent data showing substantial sell off of US government debt by major Asian holders in 2016. These are important questions. Nikhil Singh asked for a read. And this also allows me to go back to the fascinating exchange with Anusar Farooqui who is excellent on all these kind of issue, which was triggered by my post about the dollar as the foundation of the global economy a few days ago. https://adamtooze.com/2017/02/11/notes-global-condition-global-dollar-dollar-world/

The dollars dominance and the mess that the American political system appears to be in, raise questions about the dollar’s future. But too often those questions are put in apocalyptic, alarmist or simply very dramatic tones. Will there be a dollar crisis, or a sudden sell off of US Treasuries? Will the dollar be replaced by the Renminbi, or Euro, or anarchy, currency wars etc.

These questions are, I would argue, the wrong questions. For very powerful reasons (more below) the dollar is destined to remain the key currency (barring truly apocalyptic events, which despite everything are very unlikely). In fact, so obvious is this continued dominance that one has to wonder what lies behind the constant questioning and the investment that people asking the question, have in asking the question. Why do they keep crying wolf? I would argue that “dollar Angst” largely reflects a particular critique of American governance, developed from within, more often than not by Rubinite-Larry Summers-style Democrats and directed at the misrule of Republicans (about which, of course, there is no doubt. seriously!). Their questioning serves a certain purpose, above all it helps to give a grand strategic and national purpose to their version of “good governance”, which is broadly that of Rubinite “progressive neoliberalism” to use Nancy Fraser’s phrase. The question serves a purpose. It points to a crisis the possibility of which cannot be entirely denied, in the same way as the possibility of a major land war with Russia cannot be entirely denied, but which is largely a distraction from the crises we actually face. As a predictor of crisis in 2007-2008, the Sino-American stand off, was well nigh useless. The China crisis did not happen, in part admittedly because it was managed with intense focus by Hank Paulson. What instead did happen was a snowballing collapse of one US asset class which had dramatic international ramifications, but not on the Sino-American axis but within the global dollar system centered on London and involving the Europeans. More on this on other posts and in the book. The scenario in which foreign bond holders mount a first strike on the US national economy by dumping Treasuries was a phantom menace. And it is a close cousin of that other phantom menace the “bond vigilante”. In fact, why not call it the “yellow peril” scenario and you get the idea.

There is an important question to be asked about the dollar. But it is not the “declinist” question about when it will be replaced by another key currency. That isnt going to happen any time soon (barring total disasters). The question that we need to ask is how dysfunctional the inescapable entanglement with the dollar is going to be (and now add a clown car Presidency and a dangerous Congress into the mix). Dollar decline, rupture, replacement those aren’t our problem. Our problem will probably need to be thought in terms of entanglement, inescapable dysfunction, co-dependency, delegitimization, alienation etc are.

Very briefly on why the dollar isnt going away. Main reasons: When you dont do the purchasing power parity adjustment, the US is still by some margin the largest economy in the world (unless I am wrong about the Eurozone. China certainly isnt close without PPP adjustment). The US  has the deepest and most sophisticated financial markets. There is a lot of government debt, which is great if you need to stash trillions. Once you have bought a lot of that debt, you are stuck. Any sudden exit and you risk huge losses in a fire sale. Buying the debt in the first place emerges from a complex structure of balance of payments and bank balance sheet interdependence, which it would be very jarring to unwind. There are no obvious rivals other than the Eurozone, and that would have to get its act together. Instead, it seems determined to shrink the volume of safe assets it produces i.e. German government debt. Finally, the dollar zone was proactively and effectively managed in the last and most serious crisis. In 2008 the Fed stepped up and doused the world in more liquidity than any central bank had ever provided.

So a combination of structural factors, path-dependency and agency all combine to make the dollar unrivaled. But the interdependency is messy. There are risks and tensions ahead some of which I pointed to. https://adamtooze.com/2017/02/11/americas-political-economy-trump-global-dollar/

Some of the sell off driven by Asia is part of that messiness.

There are simple bits to the recent unwinding of some Asian holdings and there are some very technical pieces of the story that people like Anusar and Daniella Gabor are better placed to explain. One element is the drain on Chinese reserves as a result of a major net outflow on capital account. That’s a relatively straight forward story. The technical bit is what appears to be going on in Japan. I will give it my best shot. Others may want to jump in.

It is profitable for japanese investors to hold dollar bonds because the Fed is tightening interest rates, the Bank of Japan isn’t. The risk is that the currencies move. So you want to hedge that. To hedge you pay a price. That price has become progressively more steep for reasons that the leading authorities like BIS and very smart economist like Anusar and Daniella and Zoltan Poszar etc are trying to figure out. But one possible explanation is that the Basel III rules on liquidity and risk management have made it more expensive for big US banks to provide ample derivatives and short-term dollar funding. This is what we mean by saying that the supply of dollars is limited not by the Fed, but by “balance sheet capacity”. What you can hold on your balance sheet, whist making profit depends on the regulations with regard to capitalization and liquidity. Those have tightened. Dodd-Frank and Basel III have made a real difference. We are still trying to figure out the impact it will have on global financial plumbing. Right now it seems to be squeezing the availability of dollars in all forms. That destabilizes the profit margins on a variety of trades that Japanese investors have been engaged in. Some of them seem to be reacting by dumping holdings of US Treasuries, because the cost of hedging now outweighs the profit to be made.

None of this absolutely rules out the possibility that the wolf of the Asian dollar sell off may one day suddenly arrive. And there is no doubt that some kind of terrifying stand off with China might make that more likely. But in the mean time, I hope this note puts that particular story in some kind of perspective.

PrevPreviousNotes on the global condition – Valentine’s edition: It’s all about chocolate
NextNotes on the Global Condition: How do we relate global dollars and global cocoa?Next
related posts