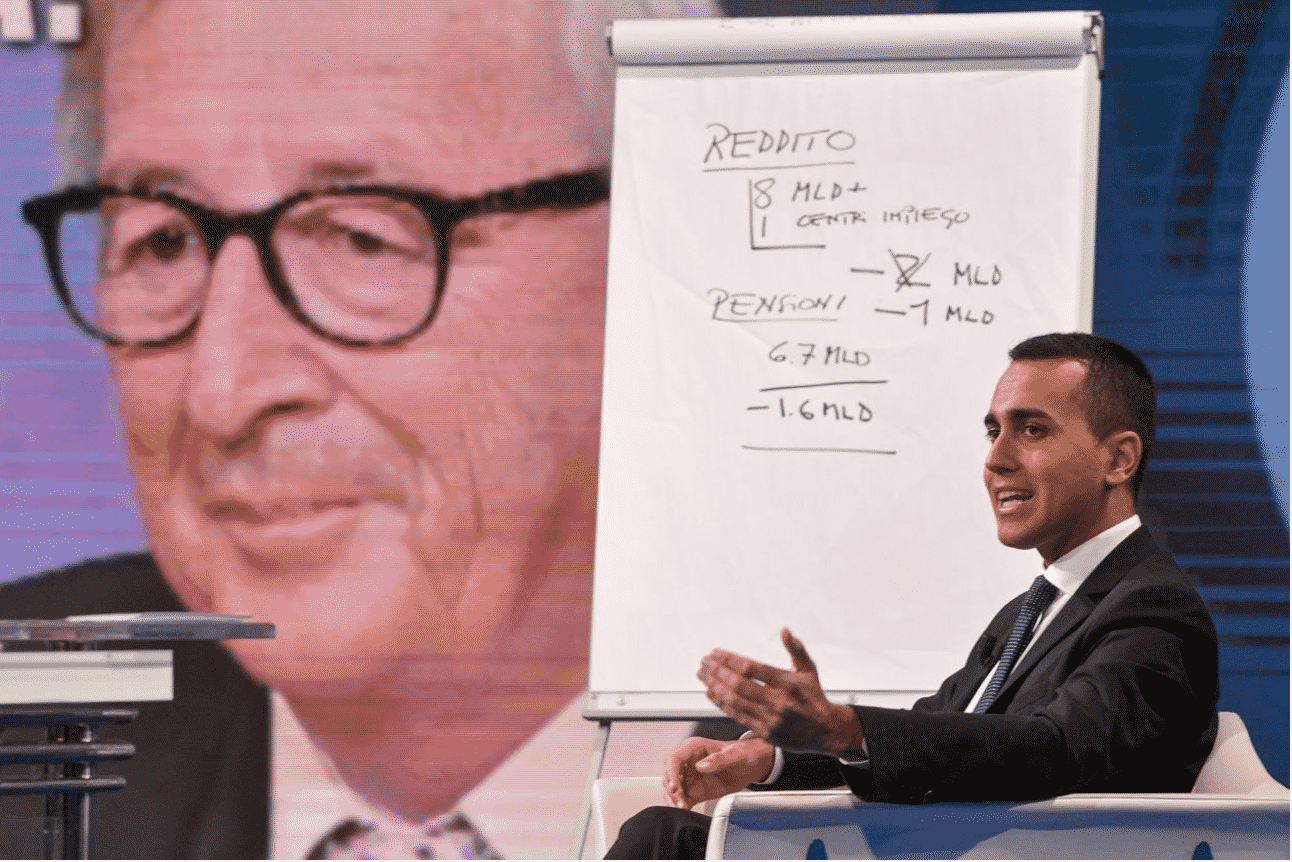 Right now the greatest threat to the eurozone and one of the most significant tail risks for the world economy is the unresolved standoff over the Italian budget and its public debt running to 133% of GDP. If Italy were not a member of the eurozone, if it had its own central bank debt at this level would be a matter of concern rather than alarm. But Italy is tied to the euro, the response of the ECB in a crisis is unpredictable and speculation about Italy leaving the euro is idle. Both the political and economics costs are too vast to contemplate seriously.

Last week I contributed a New York Times op-ed about the stand off and its risks: How does the EU think this is going to end?

My main theme was that the Rome government, however unpalatable its politics, has to be taken seriously as an expression of the crisis of Italy’s political economy. There are even worse political constellations, some of which might offer a fiscal deal more amenable to the Commission, but would be disastrous for Europe in political terms. For the EU to offer only discipline risks a further turn for the worse.

Since the publication of the op-ed, there are some signs of a new willingness for compromise on Rome’s part. But opinions differ about whether those have real promise or whether an actual budget deal will remain elusive. Many commentators believe that the League will seek to avoid stirring up further trouble before the May 2019 European elections, when they are hoping to make big gains.

In this blogpost I want to pull together the reading I have found most useful in trying to get a handle on the Italian situation over the last year.

First and foremost there are the two contributions from the team from the Peterson Institute for International Economics: Olivier Blanchard (PIIE), Álvaro Leandro (PIIE), Silvia Merler (Bruegel) and Jeromin Zettelmeyer (PIIE):

How worried should we be about the Italian debt crisis from May.

Impact of Italy’s draft budget on growth and fiscal solvency from November.

The PIIE team have established a framework for analyzing the Italian situation in which the principal problem is not the immediate impact of the proposed deficits on the debt level, which they show to be modest, but the effect of the political clash on market sentiments and the funding costs of the Italian government and Italian banks. In a catastrophic (and unlikely) scenario, in which yields leap to 5% or more, the result is that debt is no longer sustainable and a eurozone exit threatens. The mere possibility of that scenario, once factored in as a tail risk, weighs permanently on borrowing costs. As the PIIE team shows that effect is already visible in the markets. 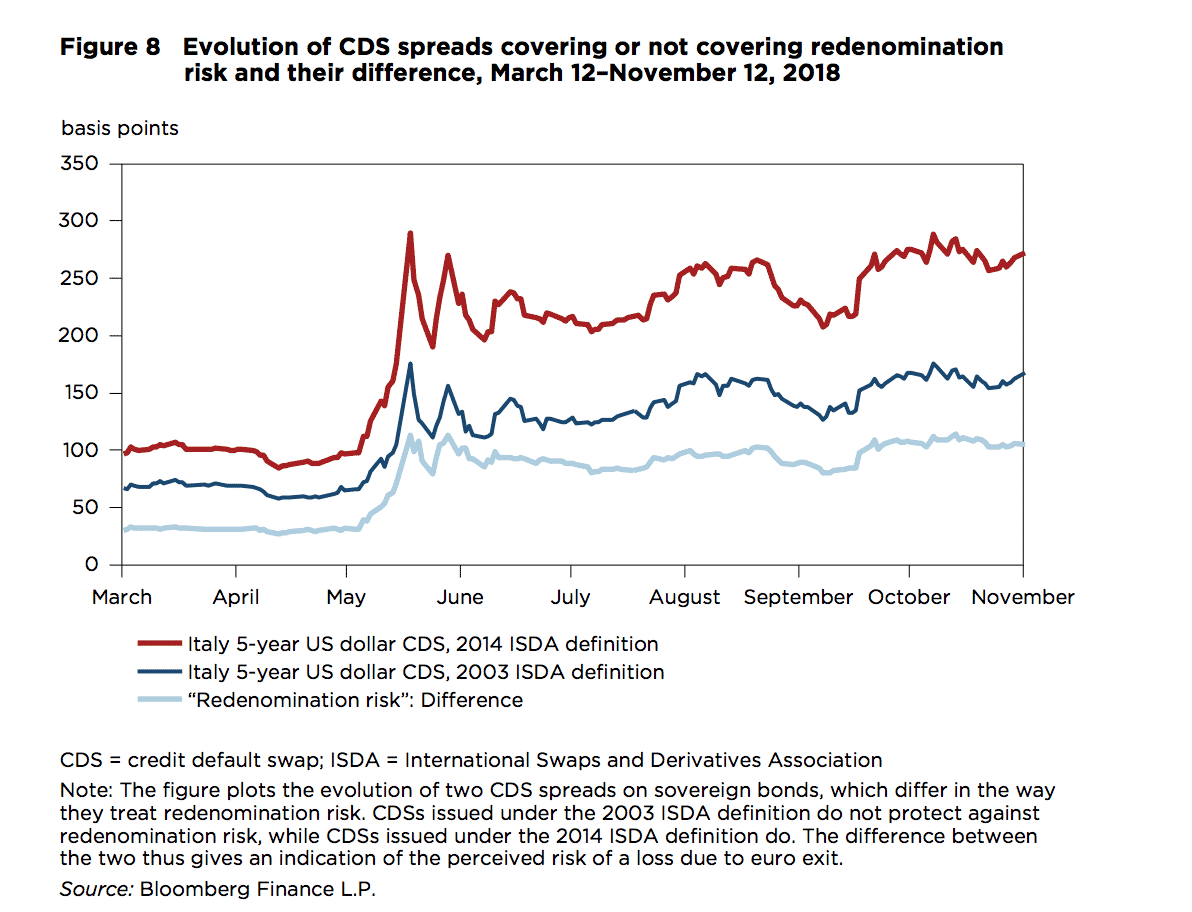 In addition, the increase in interest rates not only puts strain on the government budget but also increases borrowing costs for the private sector. The stimulus effect of the deficit is negated by the reduction in private investment. The PIIE have coined the phrase contractionary fiscal expansion for this effect.

As J.W. Mason points out in a rather cutting commentary, their analysis bears a family resemblance to the “expansionary austerity” arguments of the Bocconi school that enjoyed a brief fashion a few years ago.

In political terms the comparison is no doubt unfair to the PIIE team. But analytically the similarity is undeniable. In both cases, market sentiment/confidence/political attitudes factor explicitly in the economic analysis. This may be realistic. But it obviously also has the potential to be performative. I am not sure how far I would want to push this, but imagine if we were talking about the role of the Commission in orchestrating a “capital strike” against a “left-” rather than a “right-populist” government. Surely, if the current incumbents in Rome were from the left, that would be the Kaleckian line.

In a situation such as this, the line between politics and economic analysis – economic analysis that helps to shape the discursive context in which both market and political actors make their decisions – becomes blurry.

Speaking of performativity, what first  got me fired up about the Italian budget clash  were the technical arguments over the “output gap” calculations on the basis of which the Commission conditions its fiscal expectations of eurozone member states. 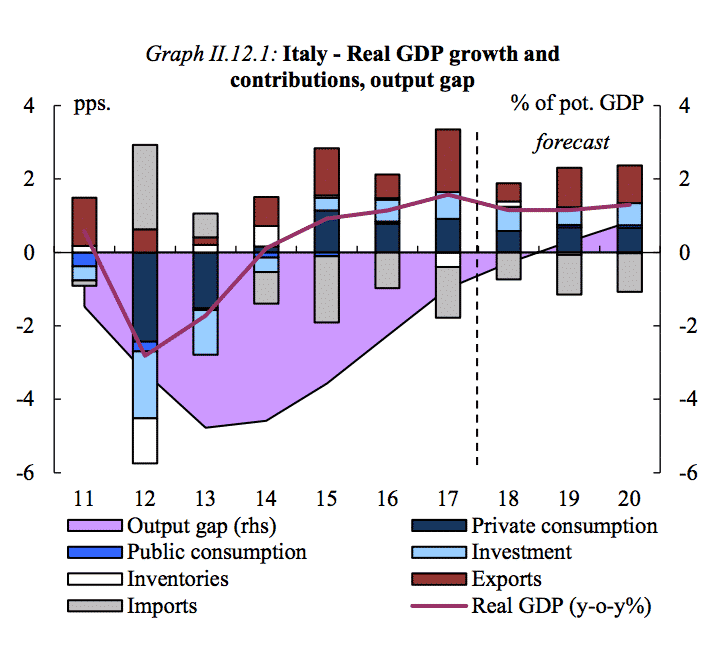 The Commission economists had managed to calculate that Italy – despite its disastrous labour market and growth record – had a positive output gap. They arrived at this deeply counter-intuitive result on the basis of the last two decades of Italy’s economic performance, which have been deeply depressing. From that track record they infer that Italy’s short burst of modest growth in recent years is above the norm. Italy may in fact be about to experience a slight uptick in inflation. And it is thus time for Rome to make a “fiscal effort”. (I am aware that I am simplifying some complicated econometrics).

The basic idea of fiscal rules conditioned on the macroeconomic balance originates in Germany’s “debt brake” constitutional amendment of 2009. The economics of the output gap go back to NAIRU (non-accelerating rate of unemployment) estimates in the 1970s.

In fairness one should say that the Commission estimates are supported also by the IMF and the Commission economists know that they are hedged by uncertainty. But the result is truly perverse. A country that has slumped onto a low growth path is condemned to adjust its fiscal policy as though that were an unalterable natural fact. If one wanted to imagine a mode of technocratic argument that was likely to trigger a voluntarist populist response this would be it.

As it has turned out, in its arguments with Rome the Commission has downplayed the output gap . The focus is on the debt level not the budget. But the “output gap debate” has, in the mean time, spawned some great critical contributions.

First out of the gate were Heimberger and Kapeller with their excellent INET contribution. Very worth reading.

Matt Klein brought the issue to public attention with a Barrons column. 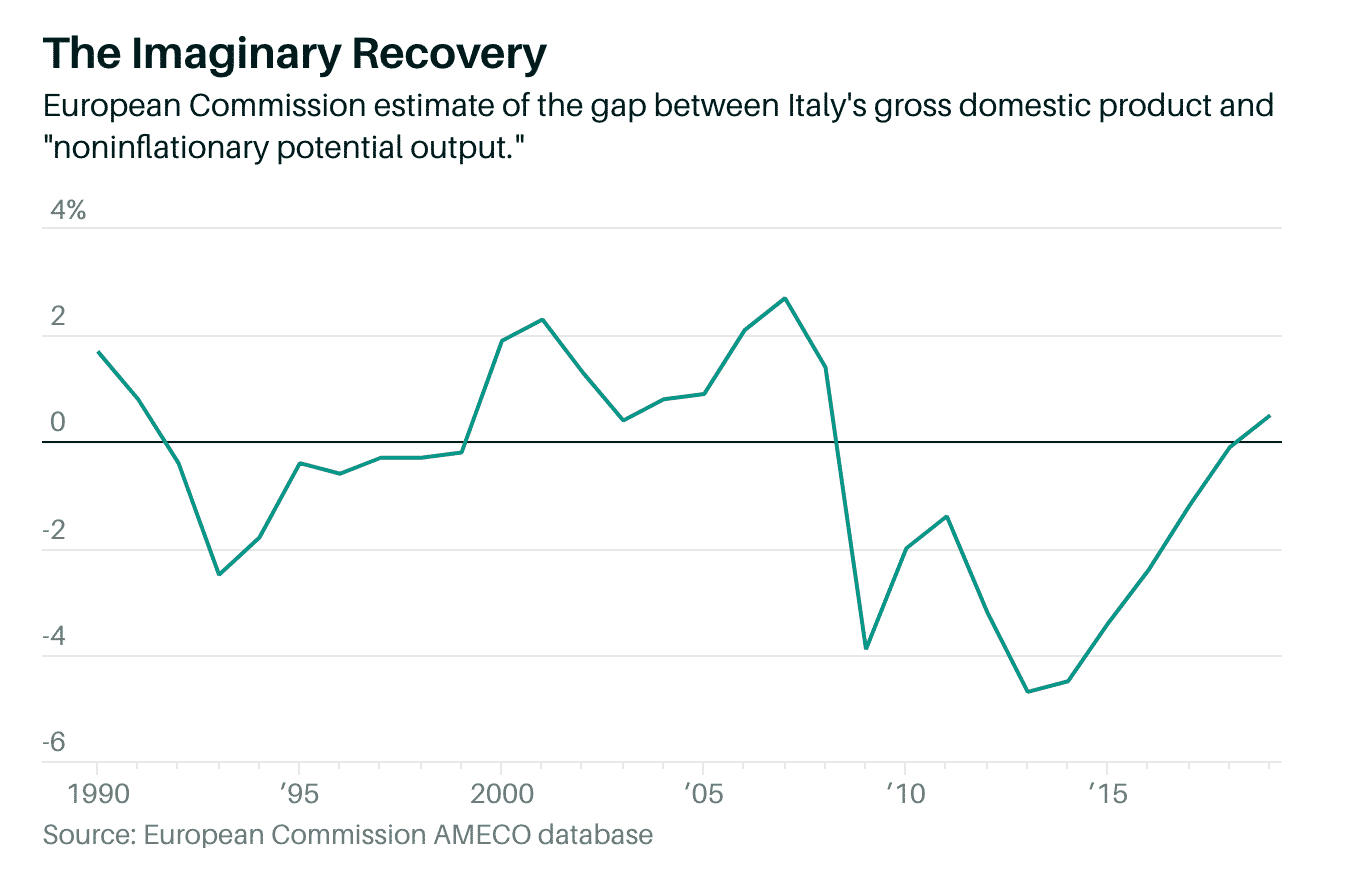 In the fall of 2018 the OECD economics team headed by its new chief economist Dr Laurence Boone published estimates that as far as Italy were concerned were far more pessimistic than those of either the IMF or the Commission. Pessimism in this case warrants more lee way with regard to fiscal policy.

Strong support from a rather unexpected quarter also comes from Robin Brooks and the economics team at the IIF. I say unexpected because the IIF is the “the global association of the financial industry”.  Brooks and his team have become an indispensable source of data not only on global capital flows. Their calculations of the output gap for Europe are by far the most pessimistic and surely the most realistic as far as Italy and Greece are concerned. 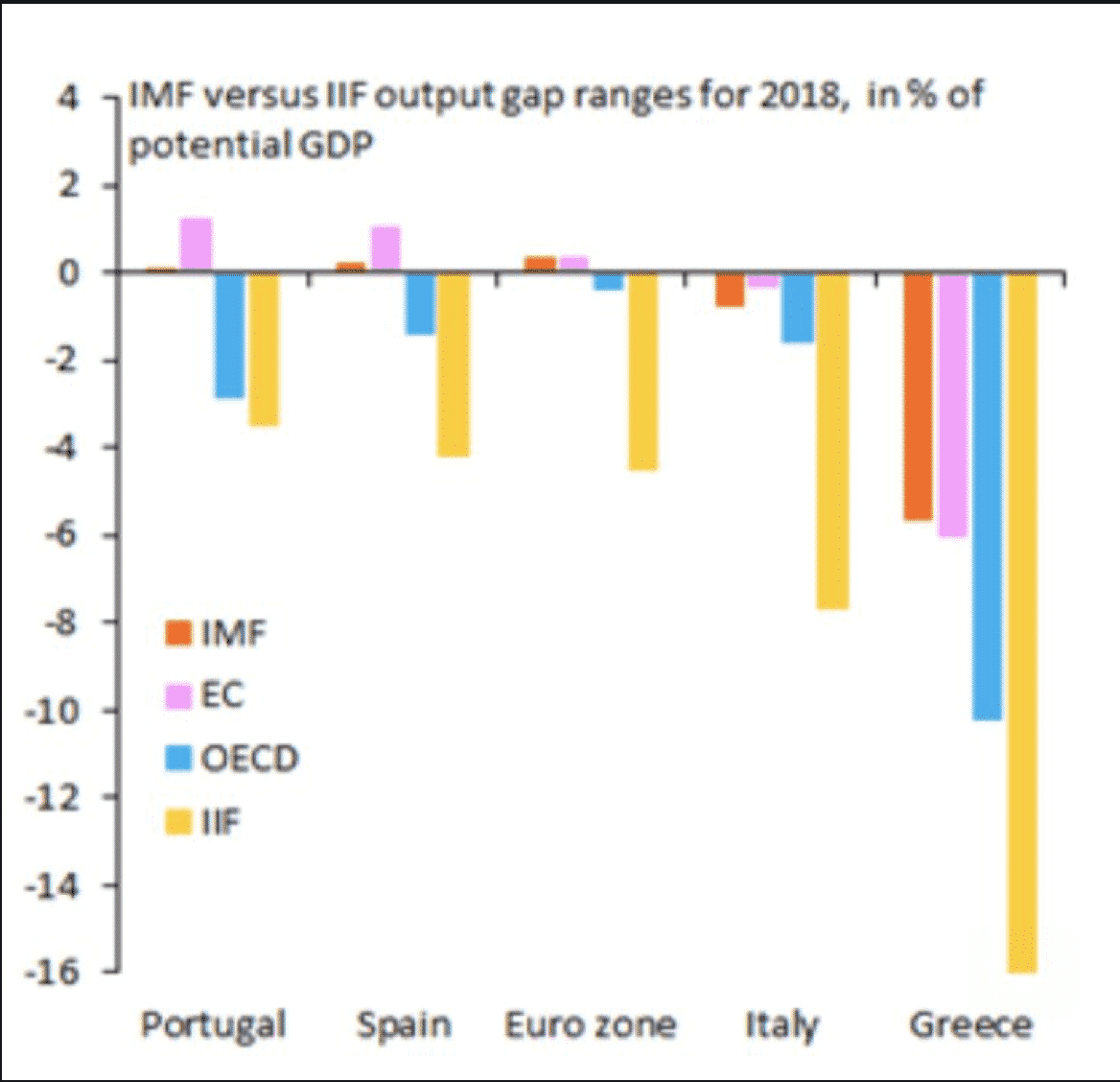 It should be clear that criticism of the Commission’s economic analysis does not imply any sympathy for the League. Nor does it imply agreement with the specific proposal of Italy’s government budget. Martin Sandbu, who has been consistently supportive of an expansionary policy for Italy, has also been extremely effective in his critique of its specific policy agenda.

Not only is the reversion to more generous pensions ill-chosen. The last thing Italy needs is a further weighting of public resources to the old. But even a shift towards investment spending faces obstacles. Alessio Terzi has produced depressing evidence that public infrastructure multipliers in Italy are unusually low. 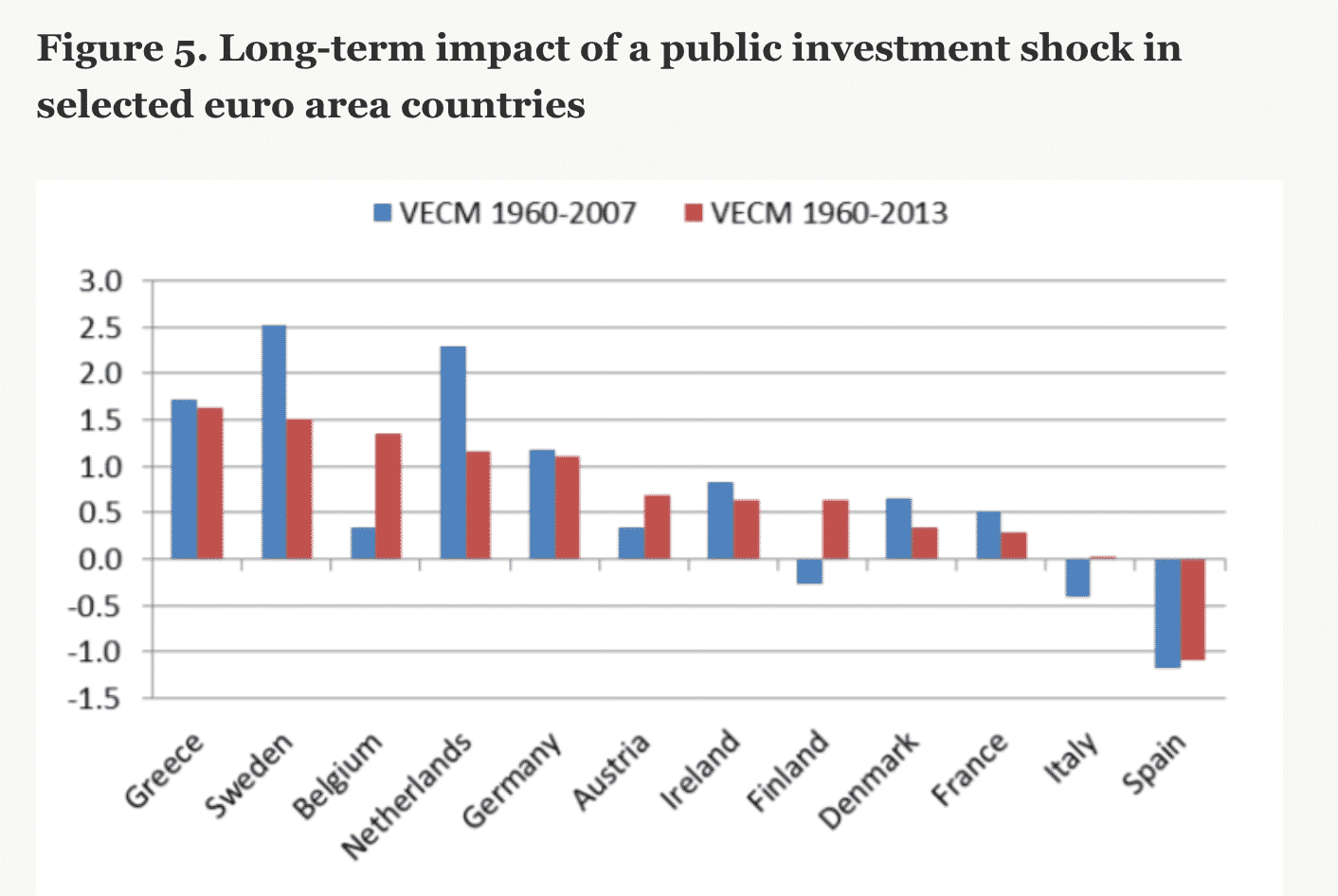 Furthermore, everyone is agreed that Italy’s most basic problem is its low growth and low productivity growth. On this the work by Pellegrino and Zingales is clearly the benchmark. Their wonderfully refined argument deserves a separate blogpost of appreciation. Agree or not with their conclusions, as an exercise in historical social science it is truly fascinating.

The Commission line is that the key to long-run sustainability and prosperity in Italy is to address these “supply side” issues. It is hard to disagree with that. The question surely is whether painful changes to Italy’s political economy don’t need to be place within a more expansive and “positive” frame for them to be “owned” by Rome in political terms. Ideally, that framing should take the form of some kind of European growth initiative and a reasonable Europe-wide solution to the problem of refugees and migration in the Mediterranean.

This is my roundup of Italy reading so far. I would be very grateful for further suggestions. Since I am traveling, email by way of the contact page is best. Thanks.