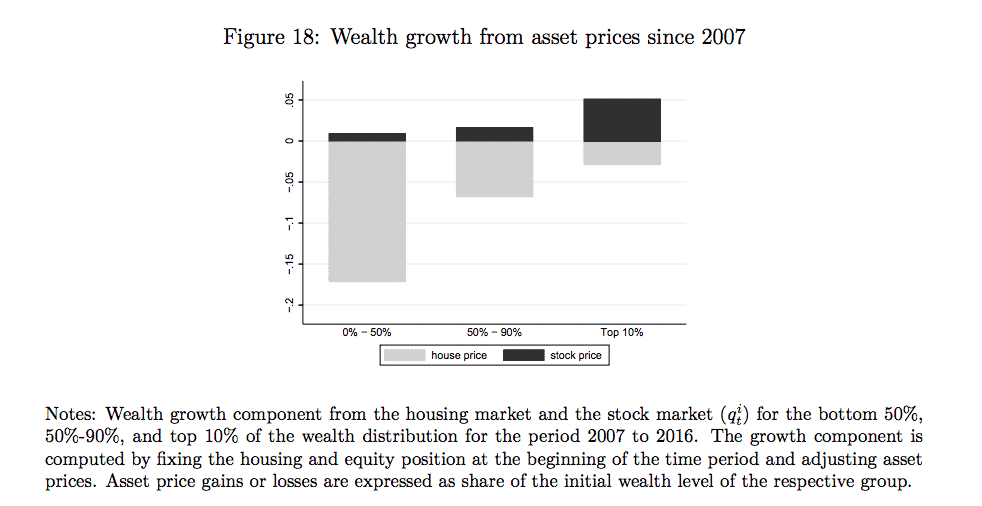 Did inequality really surge in the US from the 1970s? Did earnings for the majority really flatline from the bicentennial?

Recently, there has been a fair amount of pushback on these two cornerstones of the new inequality narrative. The academic criticism of Piketty never ends. Revising the cost of living index and allowing for non-wage income makes a big difference to whether or not you think the standard of living of the median American household has improved or not. 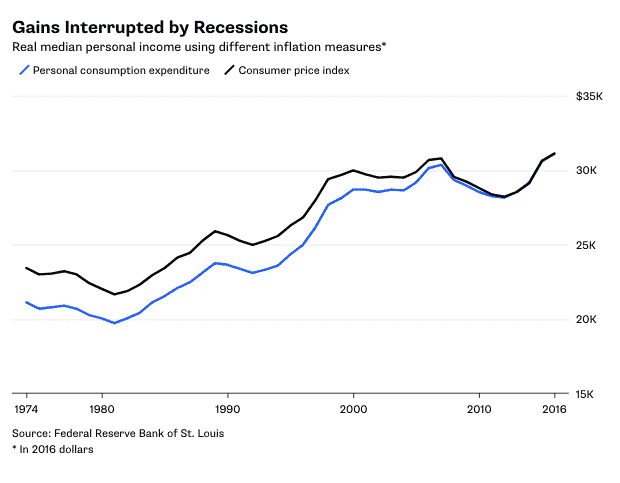 But the problem and the questions about it are not going away. Recently, two important new articles about inequality in the US restate the scale of the inequality problem and reaffirm the basic narrative, which points to the 1970s and 1980s as a moment of break.

To do so, both make use of an important source the Survey of Consumer Finances: This is fascinating because it is based not on separate series for income and wealth, but on a sequence of snapshots of a households overall financial situation including both income and wealth position. So income and wealth data can be linked.

Kuhns, Schularick and Steins (all at Bonn University) have a paper – “Income and Wealth Inequality in America, 1949-2016″ – that tracks inequality back to World War II using the survey.

For me four things stand out from its conclusion:

Yes there was a dramatic surge in income inequality in the US from the 1970s to the 1980s. 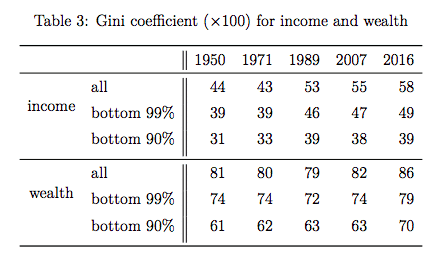 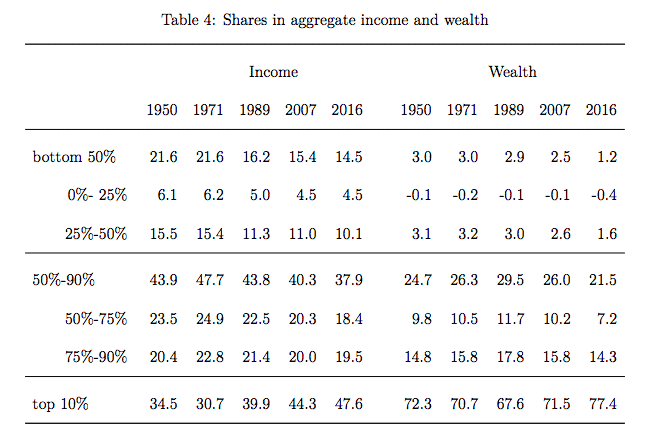 In addition, there was also a significant increase in wealth inequality in the wake of the financial crisis of 2008 and its aftermath. Between 1949 and 2000 the development of wealth across the distribution ran broadly in parallel. That at the bottom began to fall behind seriously from 2000. After 2008 only those at the top have recovered well. 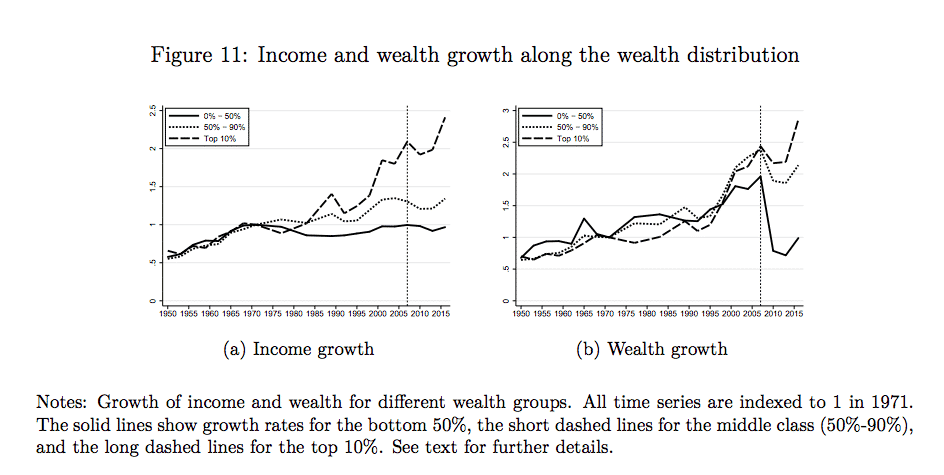 Underlying these dynamics in the general pool there is striking evidence for the failure of black Americans to make progress in relation to the white population. The huge black-white income and wealth gaps are essentially static in relative terms since 1949. There are some cyclical fluctuations but these are offset by the severe impact on black households of shocks like those in the 1970s and 1980s and 2008. 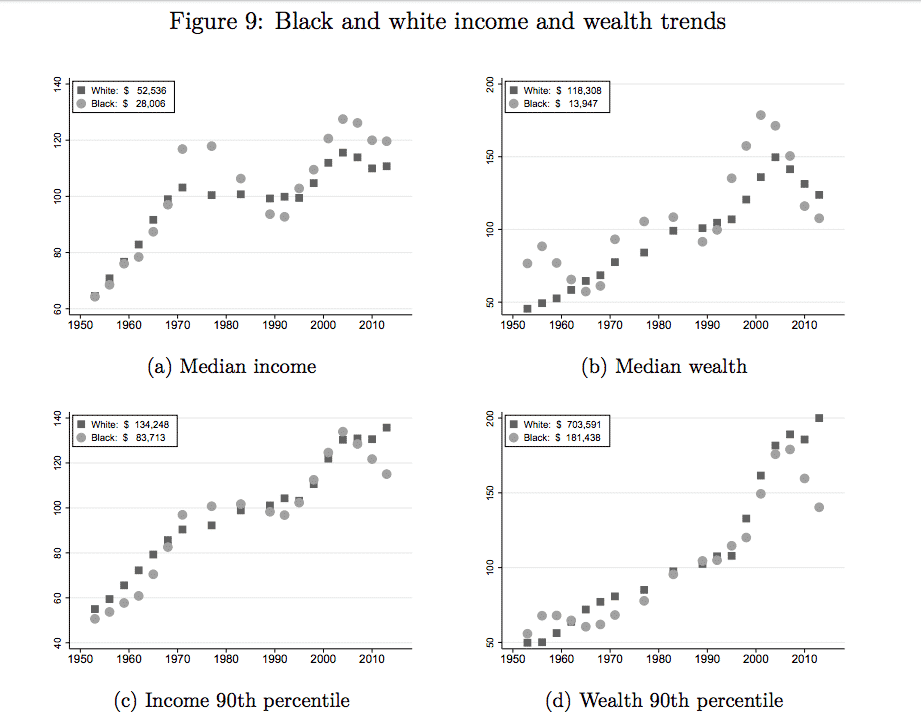 Since these are data not for individuals but households they fully account for changes in working patterns, female labour market participation and the mass incarceration of African-American men.

In addition the data show what a huge difference it makes whether you have any wealth to start with and how that wealth is invested. The bottom half of the distribution have negligible wealth or negative net worth. For those who have some assets the crucial question is whether they are diversified, or held essentially in the form of housing. For the vast majority of households their family home is the only marketable asset, this leaves them extremely vulnerable to fluctuations in the housing market. 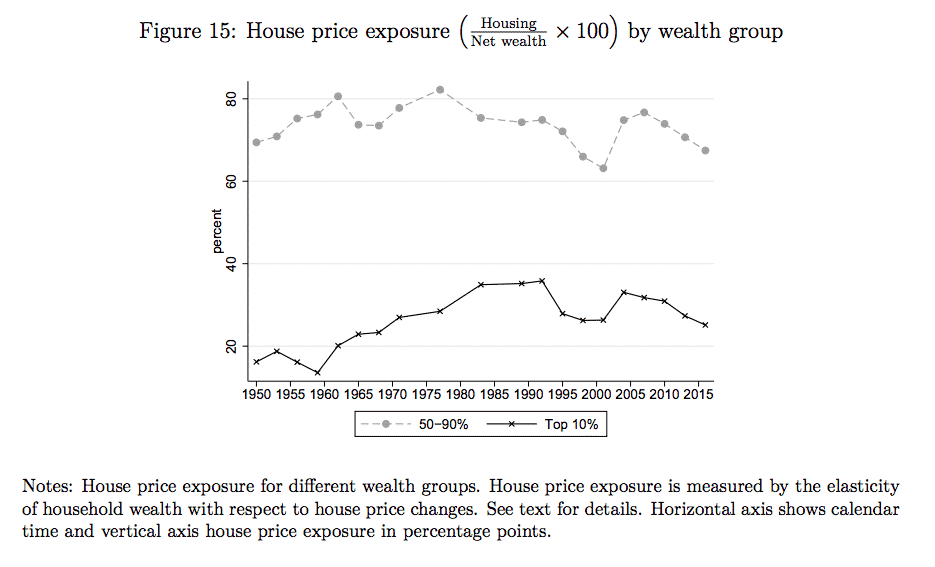 It is, to say the least, not a recipe for stable long-term accumulation. This is reserved for those at the top of the wealth distribution who can hold a wider array of financial assets and benefit from longer run trends in accumulation.

Kuhns, Schularick and Steins describe what they call a “race between the stock market and the housing market”. Since the crisis it is the ability of the upper wealth groups to benefit from the surge in non-housing asset prices that has seen their share of total wealth rise dramatically:

Another important new study also draws on Surveys of Consumer Finance, this time from 1989 and also with a view to combining multiple dimensions of inequality. Jonathan Fisher (Stanford University). David Johnson (University of Michigan), Timothy Smeeding (University of Wisconsin Madison) and Jeffrey Thompson (Board of Governors of the Federal Reserve System) bring together not just income and wealth but consumption too.

As the authors put it with regard to wealth: “The stock of wealth is more than just an annuitized income flow, as it represents the power to consume, the power to self-insure, and the power to transfer wealth across generations.”

It is an approach that Stiglitz, Sen, and Fitoussi proposed in (2009) suggesting that “the most pertinent measures of the distribution of material living standards are probably based on jointly considering the income, consumption, and wealth position of households or individuals.”

There are two types of question that pertain to multi-dimensional inquality: (1) how tightly do the three measures overlap? To what extent do low income high spenders and cash strapped aristos offset the monolithic closure of income-wealth and consumption? (2) what share of income, wealth and consumption, does the privileged hard core (those who score high on all three dimension) command?

This approach is obvious for anyone who comes from a background in sociology or political economy. The reason that economists are becoming involved is that in business-cycle models it is important to recognize how households with different budget constraints respond to shocks. Some will be able to buffer shocks. Others will not. Some will respond with a large surge in demand to increases in income or wealth. Others will not. If inequality changes, so do the response functions of household consumption.

What the analysis of the data found is that:

If we bring all three dimensions into play simultaneously the result is even stronger:

As the authors conclude: “Viewing inequality through one dimension greatly understates the level and the growth in inequality in two and three dimensions. The conclusion is that the U.S. is becoming more economically unequal than is generally understood.”