The formation of a much-dreaded 5Star and Northern League government in Rome has been blocked by President Mattarella. As interim Prime Minister he has appointed a former IMF technocrat Carlo Cottarelli, a quintessential exponent of Italy’s globalized economic and financial elite.

Only days ago Cottarelli was the man issuing damning reports on the fiscal implications of the political parties. It was his data that was quoted by the widely circulated Peterson blog post by Blanchard, Merler and Zettlemeyer. Italy’s political parties have been directly replaced by a critic of party political fiscal policy. 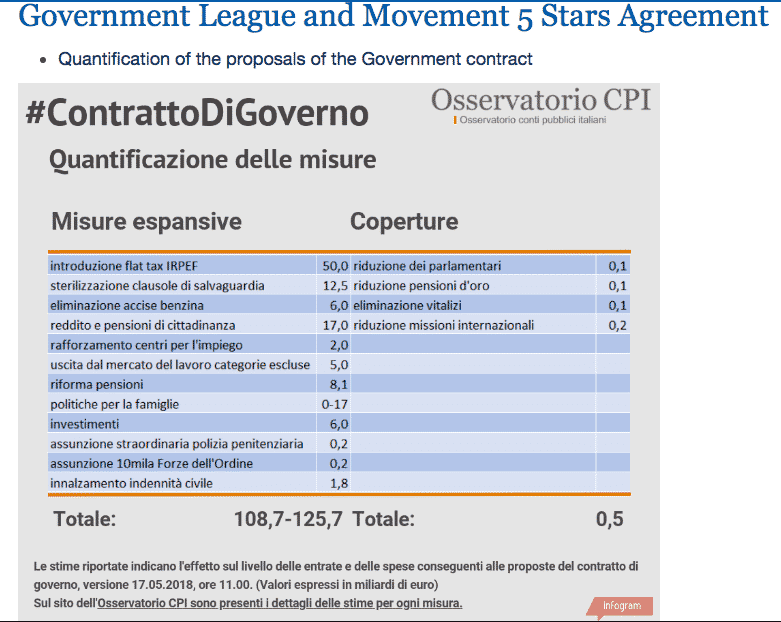 Amongst well informed online commentators such as

there seems to be agreement that a bad situation has just gotten much worse. NB this pessimism comes from all sides, including progressive political observers and commentators close to the markets.

In political terms: The victors of March 2018 who have been denied the chance to govern with a cabinet of their choosing now have no alternative but to challenge. Indeed, they will surely see it as a spectacular opportunity to do so.

The justification offered for his actions by President Mattarella was that 5star and the league had not campaigned openly for Ital-exit. Their chosen nomination for Finance Minister Savona appears to have a had euro-exit agenda, which he unwisely circulated by means of Powerpoint. The President insisted that he as not vetoing a sovereign decision by Italy’s people to leave the euro. But he insisted on a decision reached after an open debate.

But can you openly debate leaving the euro in Italy’s position?

Instead, what 5star and the league will do is to campaign against the institutions of the Italian state and with more force than ever.

The latest opinion poll data circulated by the most knowledgeable tweeters show that 35% of Italian voters think Mattarella was wrong and incorrect to block a eurosceptic government. 24% say the President was institutionally correct, but should have accepted the proposal given the situation. Only 26% think Mattarella’s decision was correct and right.

It is not 5Star that is gaining most as a result of the crisis but the League, which since 21 May has seen its support surge to 27.5 % up 3%. 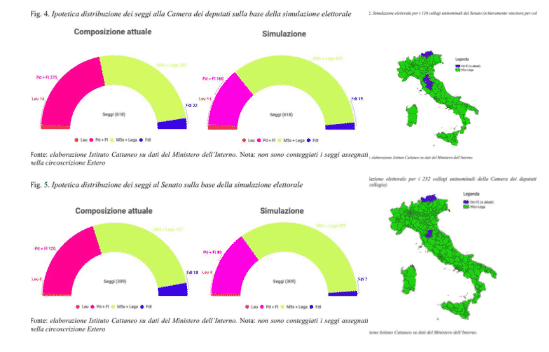 The truly terrifying scenario is one in which 5Star and the League actually run as a joint slate. In which case, on the basis of current predictions, they would claim 90 percent of the seats in both the lower and upper houses of the Italian parliament. Furthermore, they would do so after having confronted the efforts of the Italian political establishment to curb their rise to power.

The battle we are currently witnessing manifests the tensions I alluded to in an earlier post between different factions of the Italian governing class, as they emerged from the deep crises of the late 1980s and early 1990s, in an extreme form. It is even more stark than the situation surrounding the removal of Berlusconi in November 2011. In some ways it resembles that in Portugal in 2015, though there there a left-wing coalition actually was allowed to take power under conditions.

The interim prime minister Cottarelli was born in 1954. After training at Siena, he obtained valuable external credentials from the LSE (real ones), before working his way up the technocracy in Italy (Bank of Italy and ENI) and then heading for Washington, where he eventually headed up the fiscal department of the IMF. The IMF’s flagship publication on Fiscal Monitor is his doing. Cottarelli returned to Italy in 2013 to serve as a savings and rationalization Tsar for the  DP governments of Letta and Renzi. This base in term equipped him to become a leading monitor of Italian fiscal affairs. 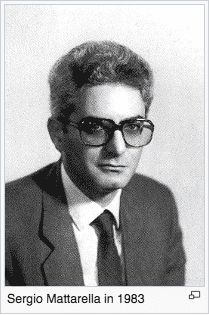 Mattarella is a man with a deeper political past. He belongs squarely to the left-wing of the old Christian Democratic Party. He comes from an important Sicilian political family, which distinguished itself by refusing to accept Mafia domination. His brother, who was elected President of the Sicilian region, paid  with his life. In the 1990s Mattarella vigorously opposed the drift of the rump of the Christian Democrats into cohabitation with Berlusconi. In due course Mattarella became a founding member of Romano Prodi’s Olive Branch left-centrist party. He is, on the one hand, a substantial and estimable public servant. On the other hand it is not hard to see why the League and 5Star regard him as a figurehead of the system that they want to overthrow.

Cottarrelli may simply be a functionary. But given his vast experience, one must credit Mattarella with a political logic deeper than simply “doing the bidding of the financial markets”. All the more so since his tactics are hardly likely to calm market tension (see below).

Insofar as blocking the formation of a government with Savona as Finance Minister and forcing the euro issue has a political logic, it seems to consist in the idea that though the League may be committed to leaving the euro, it will be afraid to run a national campaign on that issue. It will lose some of its recent gains if it does so openly. Furthermore, if the question is posed directly and the League shows its true colors, 5Star will either bolt, or fragment, weakening any eventual coalition, or even opening the door to a new DP government.

It is, to say the least, a huge risk to take. It forces the question into the open and asks the Italian people and their political class to decide. It is a strategy of tension designed to break the emerging alliance between 5Star and the League before it can permanently reconfigure Italian politics.

Certainly it seems hard to imagine that anyone in Rome expects a Cottarelli caretaker government, with 5Star and the League baying at the gates, to calm the financial markets. The political tail risks now are even more extreme than they were a week ago.

Italy’s fundamentals are just as worrying as ever. The financial pressures are well known – Italy must refinanced public debt amounting to 14 % of GDP – as is Italy’s dismal growth record. As Martin Sandbu argued in an excellent column, the program of 5Star and the League might at least have delivered a bump to demand. 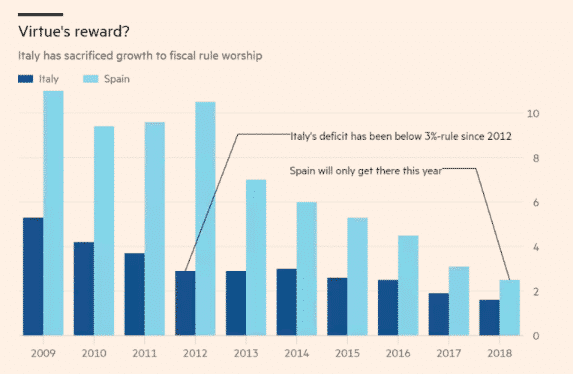 Would it really be a disaster if Italy’s primary fiscal stance resembled that of Spain rather than that of Germany?

In any case, nothing of the kind is to be expected now. We will be lucky if Italian businesses and households do not react to the strategy of tension by building reserves against a rainy day, cutting consumer spending and investment. The after effects of the 2011 shock to Italian confidence were long-lasting.

Italy was too big to bail then. It still is. The political scenarios now are even more drastic.

The only stabilizing force in play are the QE purchases by the ECB. 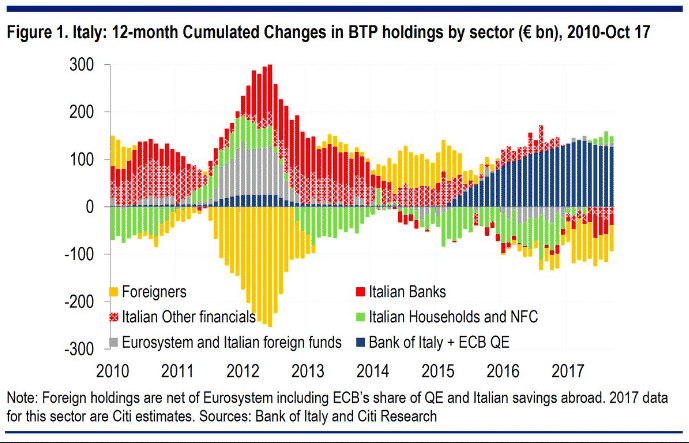 If the ECB were to taper QE, as was being widely discussed earlier this year, that would put asymmetric pressure on Italy

But something far more serious than that threatens.

This is a condition imposed on its own program by the ECB. If anyone knows the background it would be great to get pointers. Does it have to do with general rules as to what kind of collateral the ECB will accept? One might speculate that the requirement helps to ward off conservative opposition to ECB bond buying, It presumably promises that the ECB will be protected against losses. It also establishes at least rough parity between the range of bonds that are purchased.

Requiring bonds to qualify for QE by obtaining an investment grade rating, also has the effect of incorporating “market judgements” into operations of the ECB, by way of the assessments of the ratings agencies.

The political consequences are highly significant. In 2015 it meant that Greece could not be included in QE. Ever since it was formed in November 2015 Portugal’s left-wing government has had the threat hanging over it that it would lose its last investment grade rating and would be dumped out of the ECB’s QE program.

What are the risks that Italy could be tumbled out? 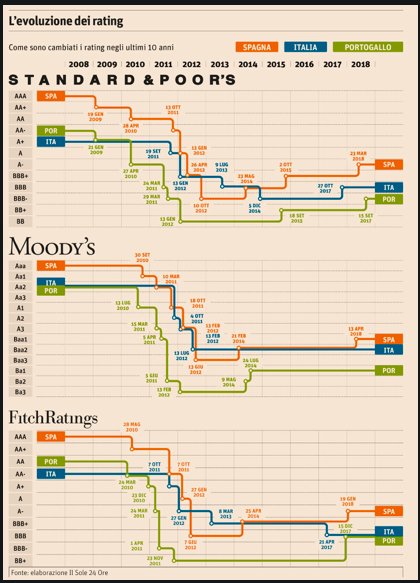 Italy started the crisis in 2008 at a solid AA- (Fitch), A+ (S&P) rating. After 2011 Italy suffered a series of downgrades nicely mapped by this chart circulated by Erik Jones. It is currently at BBB/Baa2. All it would take would be a two notch downgrade to BB+ or Ba1 for Italy to lose its qualifying status and be excluded from the ECB’s bond purchase program.

Such a downgrade or even the prospect of such a downgrade would surely be the signal for a full blown panic, which could easily become self-fulfilling.

Late last week Moodys indicated that it might be considering a downgrade. Why would it wait under current circumstances? Blocking 5Star and the League is a strategy of political tension. By splintering the 5Star-League coalition, it may offer Italy’s pro-European centrist a way out. But the downside risks are greater than ever.