Notes on the Global Condition Nov 2017: The unbelievable easiness of sovereign bond markets 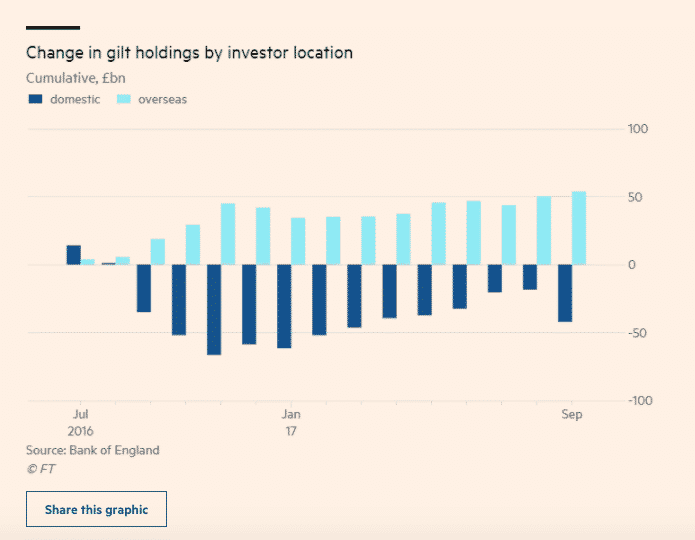 Two pieces by Kate Allen in the FT today bring home the extraordinarily easy conditions of borrowing faced by sovereigns today, which was the subject of a recent post.

Despite the chaos of Brexit politics the market for UK Treasuries (gilts) is strong. The UK Treasury is clearly right to worry about the future outlook, but as the FT reports: “The market is “much more relaxed than Treasury may think about the outlook for the public finances”.

This is despite the fact that with yields around 0.48-0.5 %, allowing for inflation, the real yield on UK Treasuries is negative. This is unattractive for investors, but the main alternative, Euro area bonds are trading at even more negative yields.

Since the main worries with regard to sterling investments are inflation and exchange rate risk, inflation linked bonds have received particularly strong interest. A 3 bn sterling issue recently was 8 times oversubscribed.

Since the Brexit referendum foreign buyers have absorbed a net 50 bn sterling in bonds.

Even if the UK were to borrow heavily and yields were to budge upwards, the likelihood is that demand would prove to be elastic, increasingly rapidly for only a slight upward movement in yield. As “David Lloyd, head of institutional fund management at one of the UK’s largest investors, M&G” put it, “Yields are around the lowest levels they have been since God was a boy, and any increase in yields would be met surprisingly quickly by demand from domestic investors, particularly pension funds.”

Whereas the UK Treasury hesitates to embark on an investment push there has been less reticence on the part of EM and particularly high-risk junk rated sovereigns. As the FT reports: “Junk-rated emerging market sovereigns have raised $75bn in syndicated bonds so far this year (2017), up 50 per cent year on year to the highest total on record, according to figures from Dealogic, a data provider. The increase has buoyed the total volume of debt-raising by developing economies; non-investment grade issuance has made up 40 per cent of the new debt syndicated in EM so far in 2017.” 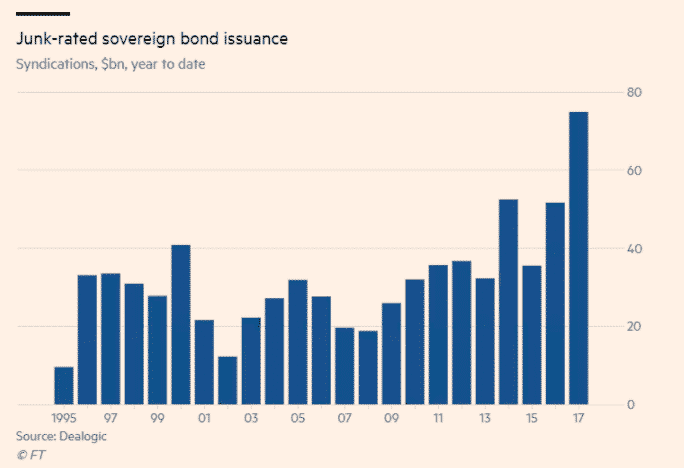 The borrowers include Bahrain, Tajikistan, Greece, Belarus, Iraq and Ukraine.

Tajikistan’s bond issue was its first ever 10-year international offering. It received $ 4 bn in bids for a $ 500 m bond. The proceeds will go towards completing the Rogun dam project, a 1970s Soviet-era hydroelectric dam. If full completed at 335 m it would be the tallest dam in the world generating 3600 MW, the equivalent of three nuclear reactors. The budget is somewhere between $ 3.9 and $ 6 bn. 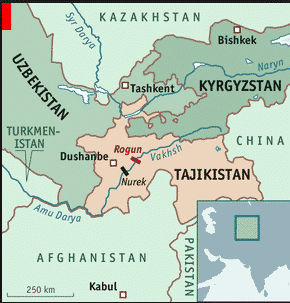 For a country with a population of 8.3 m and a GDP of $ 7.6 bn in 2012, this is a bold venture. Tajikistan has few resources other than its water. The oil price collapse of 2014-2015 and the crisis in Russia, tipped Tajikistan which is heavily dependent on remittances from Russia, into a deep recession necessitating a major local bank bailout. Its sovereign credit rating is 3B or B-. As the FT reports: “Moody’s warned last week that the country has “weak” institutions and low foreign reserve levels but noted that “despite the severe stress in the banking system, the government and central bank have maintained relative economic stability”. Citigroup and Raiffeisen Bank acted as bookrunners on the deal.”

Borrowers like the Tajiks  can get the funds they ask for because: “There is a huge amount of liquidity looking for a home,” said Douglas Rediker, a non-resident senior fellow at the Brookings Institution and former US representative on the board of the IMF. “Smart EM issuers have found a receptive audience and appetite [for debt] at advantageous rates.” Pricing is tight by historical standards: Tajikistan paid 7.125 per cent for 10-year money, while Ukraine’s 15-year deal priced at 7.375 per cent — but it is still substantially above the yields available in the rest of the sovereign bond market.”

But will the easy days for sovereign borrowers last, the FT asks? “With central banks’ quantitative easing programmes set to be scaled back next year, the general path for developed economies’ bond yields is likely to be upwards — erasing gilts’ competitive advantage for yield-focused investors. As a result, the Treasury may be running out of time to launch a public spending boost. Mr Hammond may find that this month’s Budget is his last chance to capitalise on the bond market’s tranquil conditions.”

The UK is not a “must buy” for global investors. But the market for gilts is deep and there is liquidity. The same is not true for subprime EM sovereigns. As Michael Bollinger of UBS Wealth Management put it: “The problem with liquidity is that when you need it most, it is least available, and that problem can be particularly pronounced in these rare issuer names … Some of these guys will start to find it more difficult — at this point in the cycle it is time to become more selective in EM bonds …”.

The strategic game of sovereign debt is played by different rules and for different stakes across the field of global capital markets.