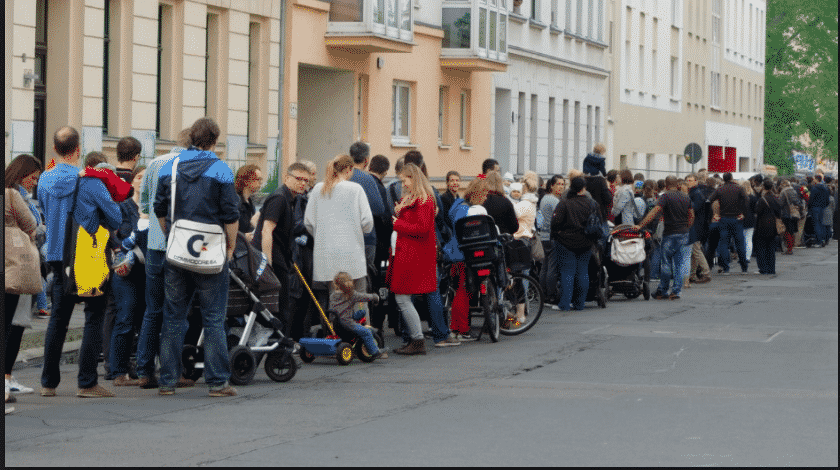 In the late 1990s clouds were gathering over the reunited Germany. Germany was the “sick man” of the Europe. German sociologists spoke of a “blocked society”. The contrast with the current perception of Germany as the most successful economy in Europe is stark. That change in fortunes and the way it is interpreted by the German political class, is vital to understanding Berlin’s position during the crisis of 2008 and the crisis in the Eurozone. It is vital also to understanding the doggedness with which the German position has been upheld.

The labour market measures of Hartz IV are the most widely discussed aspect of this transformation. I will review some key literature on Hartz IV in a future blog post. But the transformation was wide-ranging and multi-faceted. Beyond labour market changes, another key aspect was constitutional reorganization (Föderalismusreform) that addressed the balance of power and money between federal government, the Länder and local government. It was out of the second phase of this two-stage reform effort that the debt brake constitutional amendment emerged in 2009 that would have such drastic implications for European fiscal policy. This too will be the subject of a future post.

The changes went deep. In 2000 the Red-Green government put into force a new citizenship law, finally opening the door for Germany’s long-term migrant population to acquire full political rights. And another area of dramatic and rather unexpected change concerned family policy, preschool education and childcare. It too had major implications for the labour market through the participation rate of mothers and long-term demographic effects, or at least so Berlin hoped.

In 2001 Chancellor Schroeder described Germany’s childcare arrangements as befitting a “developing country”. In this respect too Germany, or at least West Germany, was in need of comprehensive reform. The system or non-system Schroeder was criticizing was a legacy of Christian Democratic domination in Cold War West Germany. It had been challenged since the 1970s by radical campaigners mainly from the Green milieu. But their influence outside cities like Frankfurt, Hamburg or West Berlin was limited. The reliance on stay at home mothers in West Germany contrasted radically with the publicly provided system that dominated in East Germany. In a determined effort to maximize labour force potential the GDR offered one of the most comprehensive system of socialized childcare in the world, if not the most.

In 1989 the East German system suffered a spectacular shock. And as I show in the attached paper (see below) this had immediate demographic effects. Nine months on from the fall of the wall, the birthrate in the territories of the GDR collapsed. On the night that the end of the GDR was announced, East Germans stopped making babies. 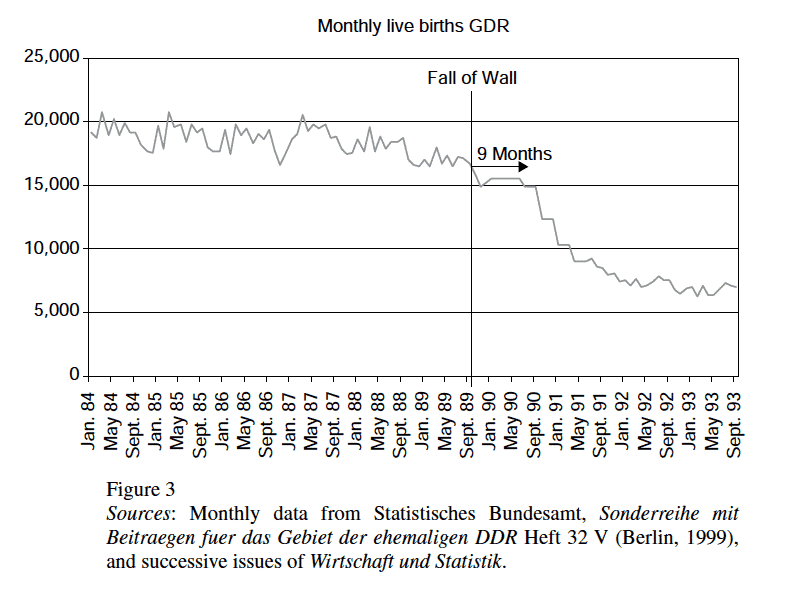 In the 1990s the East German system underwent retrenchment. But still today child-rearing practices vary drastically across Germany. Conservatives in the West anathematized the GDR’s system as totalitarian. Motherless children, they alleged, grew up to be Communists, or, after 1989, to be skinheads. But in the context of global debates about gender mainstreaming, female workforce participations and the economic benefits of early childhood education the tables were turned. This was one sphere, it turned out, where the Communist East was closer to the demands of the new (neoliberal) global standard than the conservative Christian-Democratic West. Conservatives did not give in without a fight. But they had their own anxieties. Above all they were deeply concerned with Germany’s declining birth rate. Catholics for their part demanded an more comprehensive and more expensive commitment to maternalism.

As a result of these contradictory impulses the Red-Green government initiated a major change to publicly supported childcare that was continued by the Grand Coalition that followed after 2005. It was a remarkably far-reaching debate, which intertwined issues of gender relations, family policy and labour market policy with other abiding questions of the German political class such as demography and “sustainability”. The effect on childrearing practices in the West has been striking. The discursive hegemony of the Christian Democratic male-dominated, single breadwinner model has been decisively broken. The number of kids under the age of 3 in daycare facilities has surged. 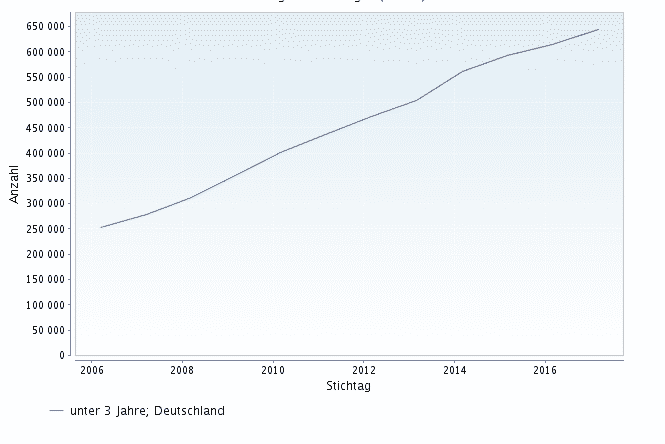 Germany now has a higher prime age female labour force participation rate than the US or the UK. 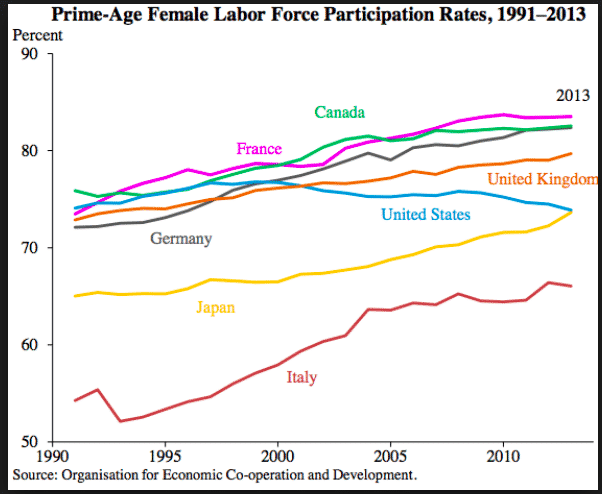 The essay posted below which explores the childcare debate in Germany in some depth was a contribution to a Festschrift for Paul Ginsborg. In the 1980s Ginsborg was an inspiring teacher of comparative European politics in the Cambridge SPS department. His lectures on fascism had a deep impact on me. They kept my interest in history alive at a time when I was mainly preoccupied with economic theory. After leaving Cambridge to teach in Italy, Ginsborg produced a series of important works on family history and the history of modern Italy. To me his volumes on Italy are models of contemporary history writing. 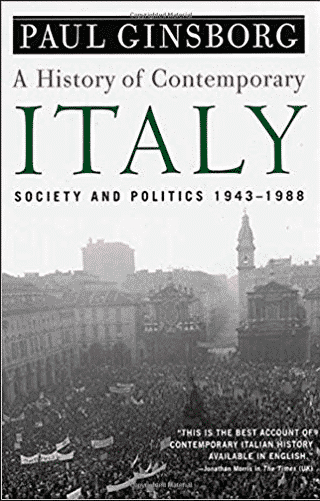 When I started on my contribution for Ginsborg’s Festschrift, family policy wasn’t a topic I knew much about. But in the intellectual whirl that followed Wages of Destruction it captured my imagination. Furthermore, being the father of a young child at the time raised my awareness of the significance of this key social issue. One further ingredient in the mix was a new burst of reading in social theory and philosophy. One of the things that had inspired me about Ginsborg’s lectures was the dialogue he maintained between history, political and social theory. In dealing with Italy Ginsborg framed his history within a classical conception of the relationship between state and civil society. Borrowing from Foucault and Arendt by way of one of Malcolm Bull’s brilliant essays in the NLR, I tried to argue that German history required us to deploy, instead, the concept of the biopolitical.

Ten years on, the “Kita”-debate in Germany goes on. Especially West German Länder struggle to provide enough places. At a panel I recently chaired at Columbia, Deutsche Well’s New York correspondent bluntly declared that Germans cared far more about childcare places than they did about Russia. West Germany including the most prosperous regions of Bavaria and Baden-Württemberg are in childcare deficit. Long queues of desperate young parents form outside the offices that allocate Kita places. 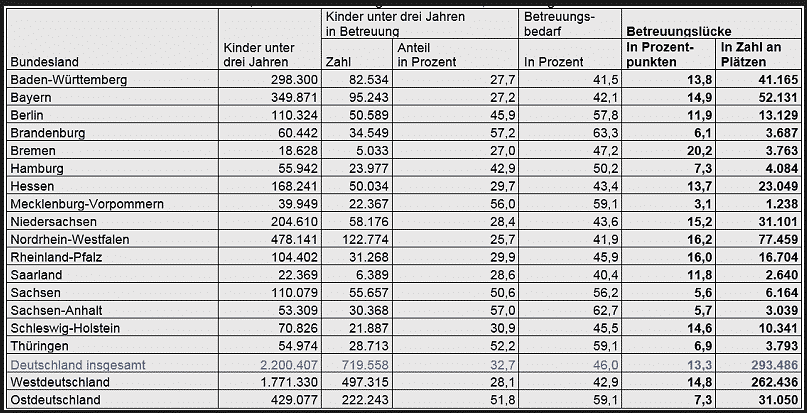 In the mean time, the piece I originally put together in 2007 has taken on new significance for my thinking about Germany. When it was written, the narrative of Germany’s comeback was only just beginning to take shape. The crisis was still on the horizon. Ahead of the crisis, writing this piece changed the way I thought about policy-making in the FRG. The mixture of domestic and international factors, short-term and long-term time horizons, and the range of actors shaping the formulation of family policy in 21st century Germany – from party politicians and activists, to think tanks, lobby groups and constitutional lawyers – was fascinating. It suggests the complexity of the matrix that we need to consider in struggling to make sense of Berlin’s response to the shocks of 2008 and 2010-2012.

The essay is linked here: Tooze contribution to Skinner Families and the State