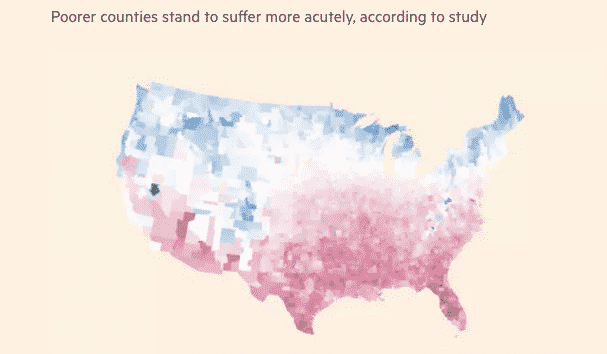 As climate changes and temperatures rise, who will hurt? At least since the 1980s and Ulrich Beck’s pathbreaking work on Risk Society, the question of the social stratification of risks has been posed.

At a global level it has long been obvious that some of the poorest nations will suffer most from climate change and that the US is amongst the least impacted countries. But does this finding hold across the US? Remarkably, a new study by the Climate Impact Lab (UC Berkeley, Rutgers, University of Chicago, and Rhodium Group, along with their research partners at Princeton University and RMS.) is the first to attempt to assess the effects across the US at the county level.

The results were published in Science and were reported in both the FT and the NYT.

The results are pretty eye-opening. Assuming a business as usual emissions scenario and no major breakthroughs in mitigation, every 1°C increase in global temperatures, costs the US economy about 1.2 per cent of gross domestic product. But these costs are very unevenly distributed. The impact on the Southern parts of the US by 2100 is predicted to be very severe indeed. 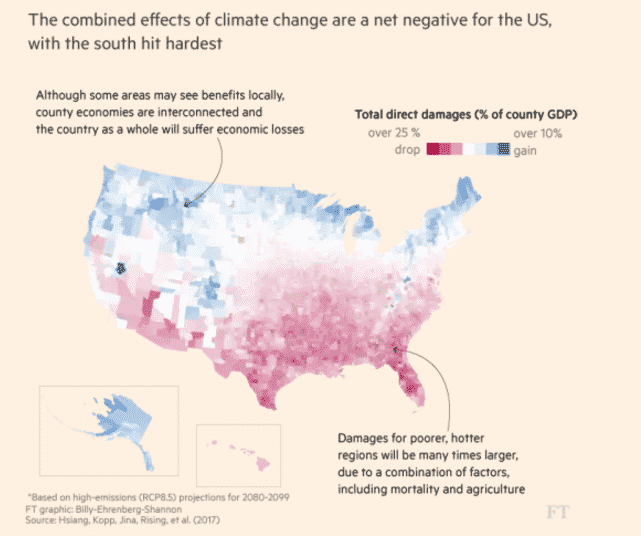 With the impact concentrated in the South, this also means that the costs will fall disproportionately on the poorest counties of the US. 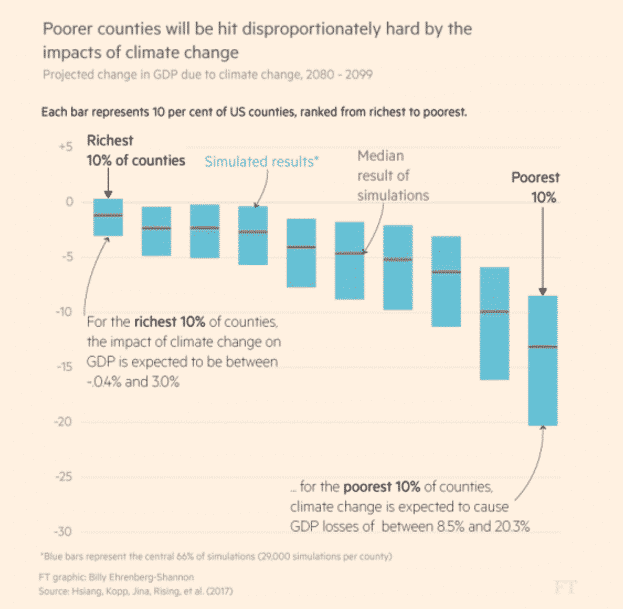 Solomon Hsiang, Chancellor’s Associate Professor of Public Policy at UC Berkeley comments: “If we continue on the current path, our analysis indicates it may result in the largest transfer of wealth from the poor to the rich in the country’s history.”

Agriculture will be subject to wrenching changes. The classic midwestern areas of American agriculture will likely be devastated by diminished rainfall.

So far, so intuitive. On the face of it this seems like fairly conventional economic and agronomical analysis.

But if you follow the links to the Science paper you come face to face with the sheer weirdness of the interface between climate change and social science. I don’t say this to cast doubt on the seriousness of the problem. I am not a climate change skeptic. But an important paper like this prompts one to think about the dramatic challenge that the anthropocene poses for social, economic and political analysis.

The model they use to derive their shocking conclusions has the rather lovely name, SEAGLAS, which stands for Spatial Empirical Adaptive Global-to-Local Assessment System. As the authors write: “We developed the  (SEAGLAS) to dynamically integrate and synthesize research outputs across multiple fields in near-real time. We use SEAGLAS to construct probabilistic, county-level impact estimates that are benchmarked to GMST changes.” Specifically, the aim of the game is to provide a “probabilistic and empirically derived “damage function,” linking global mean surface temperature (GMST) to market and nonmarket costs in the United States, built up from empirical analyses using micro-level data.”

The drivers in the model are a set of relationships between temperature crop yields, labour supply, mortality, energy consumption and crime … yup, crime! 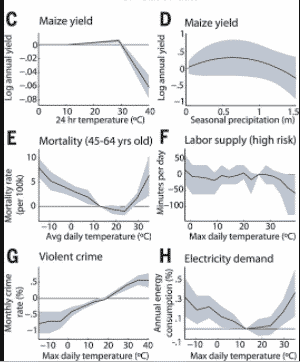 Apparently, people don’t commit violent crimes when it is freezing!

Those relationships are then used to estimate a range of scenarios for future temperature increases and rises in mortality and crime (differentiated by property and violent crime), declines in labour input etc. 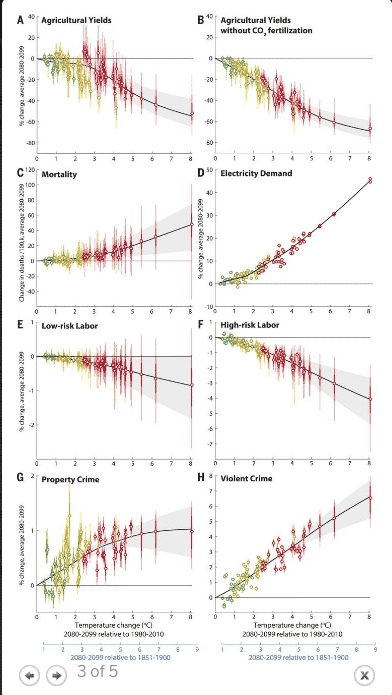 This produces a rather ominous looking map of the increase in violent crime supposedly triggered by the temperature increase. 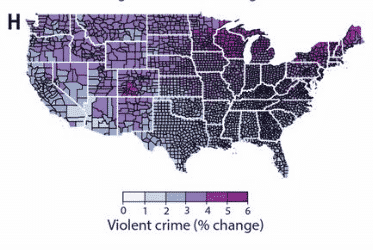 But the big issue is mortality. As the paper comments: “Rising mortality in hot locations more than offsets reductions in cool regions, so annual national mortality rates rise ∼5.4 (±0.5) deaths per 100,000 per °C (Fig. 3C). For lower Global Mean Surface Temperature (GMST) changes, this is driven by mortality between ages 1 and 44 and by infant mortality and ages ≥45 for larger GMST increases (fig. S13 and table S12).” To put an increase of 5.4 deaths per 100,000 in perspective, in 2016 mortality in the US was 823.7 deaths per 100,000 population. So a 1 degree temperature increase produces a 0.6 % increase in mortality. That may not seem like a lot, so what happens next is significant. To arrive at the overall estimate of economic costs “the value of nonmarket impacts (deaths and crime)” was “monetized” “using willingness-to-pay or accounting estimates”. In other words they are using actuarial estimates of various kinds derived from life insurance contracts etc. In particular they use the government mandated parameter of $ 7.9 m per life.

Once all the various impacts are translated into a common denominator it turns out that the “economic impact” of climate change above 2 degrees Celsius is, in fact, largely demographic. 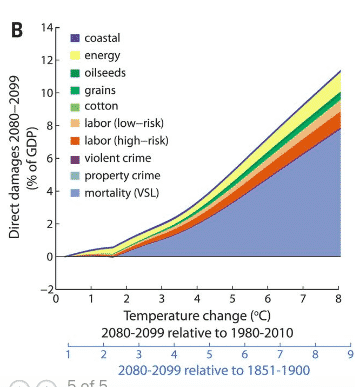 Labour supply, crop production are all negatively affected by higher temperatures. Criminality, though it is positively correlated with temperature, washes out. The real hit to the poorer, Southern area will come from poor Southern people dying prematurely!

As the researchers comment: “The greatest direct cost for GMST changes larger than 2.5°C is the burden of excess mortality, with sizable but smaller contributions from changes in labor supply, energy demand, and agricultural production … “. They then continue in a truly remarkable qualification: “It is possible to use alternative approaches to valuing mortality in which the loss of lives for older and/or low-income individuals are assigned lower value than those of younger and/or high-income individuals (44), an adjustment that would alter damages differently for different levels of warming based on the age and income profile of affected individuals (e.g., fig. S13). Here, we focus on the approach legally adopted by the U.S. government for environmental cost-benefit analysis, in which the lives of all individuals are valued equally (37). Because the VSL (Value of a Statistical Life) parameter is influential, challenging to measure empirically, and may evolve in the future, its influence on damages is an important area for future investigation.”

Given that the headline of the research is that poorer parts of the US will be worst affected, this is a highly significant remark. Presumably, if one were to abandon the legally mandated requirement that all individuals should be valued equally, if, instead, one adjusted the value of life parameters fed into the model to take account of the fact that those most likely to die will be poor, the headline conclusion might be rather different.

In passing, in this technical aside the modelers acknowledge the brutally discriminatory realities of the century that lies ahead.

And there is more to come. “We have focused on the U.S. economy, although the bulk of the economic damage from climate change will be borne outside of the United States (42), and impacts outside the United States will have indirect effects on the United States through trade, migration, and possibly other channels. In ongoing work, we are expanding SEAGLAS to cover the global economy and to account for additional sectors, such as social conflict (30), in order to construct a global damage function that is essential to estimating the global social cost of carbon and designing rational global climate policies (7, 9).”

The “social conflict sector” will be fascinating.