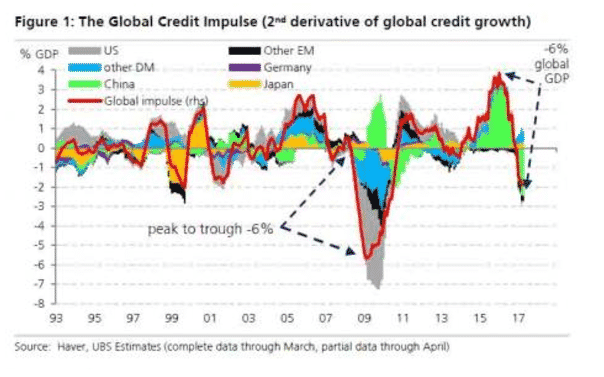 In late Feb 2017 UBS’ analyst Arend Kapteyn reported that a measure of global credit impulse covering 77 % of world economy was behaving rather alarmingly. After growing vigorously in 2015 and 2016 thanks to another round of Chinese stimulus the credit impulse had collapsed to zero.

Since then the news is worse with the global credit impulse indicator falling earlier this month to negative numbers not seen since the dot.com bubble burst. On previous form this should be a strong leading indicator of a fall in investment and contractionary pressures in the world economy.

The notion of credit impulse, though essentially very simple, is relatively new to macroeconomic analysis. It is generally credited to Michael Biggs of Deutsche Bank who introduced it in November 2008 to make sense of the collapsing financial system and its impact on the real economy. http://www.ft.com/cms/s/0/6361b1d6-bc26-11dd-80e9-0000779fd18c.html?ft_site=falcon&desktop=true#axzz4k7QU0mjz

The argument derives from basic Keynesian macroecomomics. An equilibrium is defined by a level of investment. In such a situation there is a steady level of investment and GDP. There is therefore no growth. What will produce a burst of growth – an increase in income from one equilibrium to a higher equilibrium level – is an increase in investment. Sustained growth of the type that we tend to take for granted requires continuous increases in investment. If we assume that investment is financed through new loans, then the credit indicator that will be most closely related to economic growth is not the stock of loans outstanding, or even the increment of new loans added (which corresponds to the flow of investment), but the change in the flow of loans, the counterpart to the change in the flow of investment. If the flow of loans is continually increasing, then investment will not just be continuing to flow, but will be flowing in increasing amounts and there is likely to be continuous growth. So accelerating growth in credit tends to be associated with accelerating growth and the reverse. Decelerating growth in credit will produce slower growth. Negative growth in credit will tend to produce economic contraction. Etc.

The following algebra may help. For sake of comprehension remember that credit in the way that Biggs and Mayer use the term refes to the stock of loans, not “new credit” as might be more colloquial. 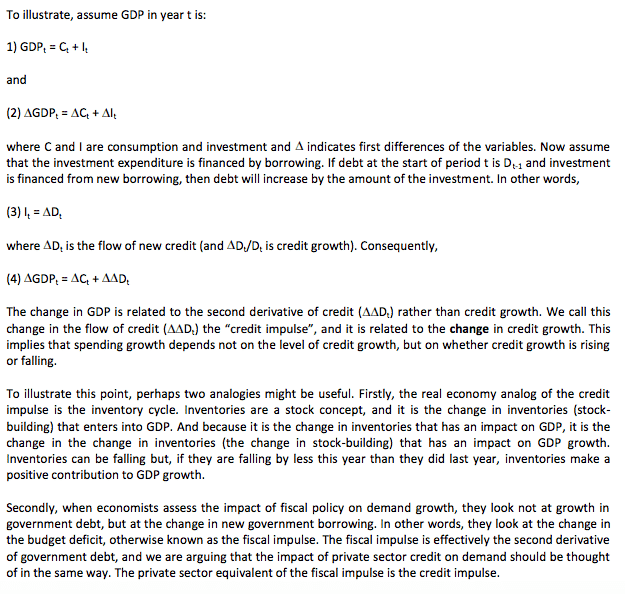 With that under our belt, back to the graph that is so alarming analysts. Here it is again:

In 2015 the flow of loans in China was increasing, so investment was increasing, so China was continuing to grow. Indeed in relation to global GDP China was carrying the entire load of credit expansion and its stimulus was increasing. The rate of expansion in credit was increasing. But look what has happened in 2017. It is not that Chinese debts are going down. Furthermore, new loans continue to be issued. But the quantity of new loans is not increasing but shrinking. So credit growth is now negative. So there is still some investment but less than before, triggering a downward adjustment. Shifting from a situation in which loans are being issued at an accelerating rate to one in which the rate at which they are being issued is decelerating imparts a major negative shock to the economy.

Another very interesting feature of this graph is to note the composition of earlier cycles. Since 2009 China dominates the global cycle. But you only have to go back to 2008 to see a very different world in which the dominant drivers of the global credit cycle were the US, Japan and “other DM” which means Europe. The surprising new we get about the wold prior to 2008 is that when placed against global gdp, the (private) debt bubble in the Eurozone prior to 2008 was every bit as important as anything that was happening in the subprime debacle in the US.