Notes on the Global Condition: Conversation with a Bundesbanker 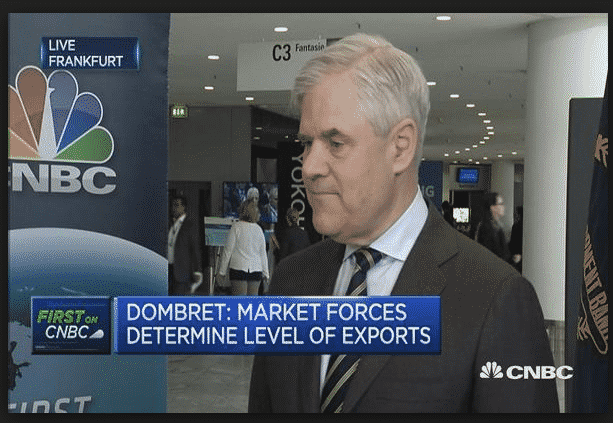 Earlier in the week I was asked to provide comments on a speech by Bundesbank Executive Board member Andreas Dombret.

His wikipedia bio starts as follows: “Andreas Raymond Dombret (born January 16, 1960 in the United States[1]) is German-American banker. He was the Vice-Chairman of Bank of America Global Investment Banking in Europe, the Middle East and Africa as well as Head of the German, Austrian and Swiss branches. Since 1 May 2010, he has been a member of the Executive Board of the Deutsche Bundesbank with responsibility for Banking and Financial Supervision, Risk Controlling and the Bundesbank’s Representative Offices abroad.[2] Andreas Dombret holds dual German and American citizenships.”

So, he’s as connected a member of the trans-Atlantic banking/central banking fraternity as you can find.

Text of Dombret’s speech at Columbia is available at the Bundesbank website. Dombret strayed only slightly from this script. There were a few more references in his speech to populism and trans-Atlantic tensions, but the jist was very much the same.

I had prepared by reading up on Dombret’s recent speeches, which mainly concerned banking regulation and the on-going crisis in German banking, that being his brief. And I was thinking of asking him what he thought the minimum level of profits was that it was safe for society to ensure that private banks earned. If you have a big bit of crucial infrastructure that is privately operated, how hard do you want those corporations to be squeezed? What are the risks in terms of system maintenance and lack of reserves in case of shocks? If there is some minimum profit level, is there some maximum? Are we at a point where we are effectively defining socially acceptable rates of profit for private banks etc etc etc.? Is there an upper limit as well as a lower bound?

But Dombret went in a different direction, to address broad issues of the Eurozone and global trade. I take this as being part of a piece with German government efforts ahead of the G20 to stake out a defense of free trade and of its dramatic trade surplus. Apparently the SPD controlled economics ministry and Schäuble’s Finance Ministry have painfully agreed a position on this issue.

Of course, I don’t have any problem with Germany stepping up to the plate as a liberal hegemon of sorts. Dombret’s discussion of Dani Rodrik’s position has a passing similarity with arguments made recently by Martin Sandbu on the resilience of globalization. But there are such obvious contradictions even in Dombret’s short speech that I thought it was worth probing a little bit. So I put three questions to which I didn’t receive answers. But I thought it might be noting them down:

1. When Germany replies to the Trump administration’s attacks that it is not manipulating the Euro to boost its exports, is this a lesson in Eurozone/EU governance 101? Or is Schäuble conducting a barely veiled campaign against Draghi’s QE, which is unpopular amongst German conservatives, and also depresses the Euro against the dollar. Will American pressure be used to unhinge the tacit deal that Draghi seems to have struck with Merkel to allow a Eurozone-wide expansion? More generally do the pressures brought to bear on Europe by the US threaten delicate balances within the Eurozone and within Germany’s own political economy? How do German policy-makers manage those? Will they tie themselves to mast of ECB or attempt to manipulate the situation?

2. Dombret made the usual German case for fiscal union or a new regime of bank supervision and sovereign bond risk-weighting that will break the sovereign-bank nexus. I thought it was interesting that he should bring up the issue of sovereign debt as a long-term structural issue of the fiscal constitution and of banking regulation, but not mention Draghi’s QE bond-buying program and its effect in leveling the Eurozone sovereign bond market. A coincidental omission? What would happen in the eventuality that Portugal lost its last investment grade rating and thus dropped out of the bond purchase program?

3. In dealing with the US and Europe Dombret made no bones about his hostility to “populism”. Did this mean, I asked him, that central bankers were now claiming a right to speak out selectively against some political parties? Those being labelled populists were after all more or less legitimate parts of the political system from which central bankers claimed to keep their distance. What did he think of the example of the Bank of England offering analysis that clearly favored one side in the Brexit debate (the anti-populist side) and then, after the referendum result, putting all its firepower on the line to stabilize the ensuing panic. Was this a model for how central banks should relate to “populism”? How did it compare to the ECB in Greece in 2015? Did Europe’s central banks have a plan for the unlikely eventuality of a Le Pen win?

Predictably, the answers left something to be desired. What was most remarkable was Dombret’s mantra-like insistence that central bankers should stick to their  mandate, his equally mantra-like insistence that problems were complex and had no simple solutions (anti-populism) and his manifest preference for the simplest-possible mandate i.e. price stability pure and simple. Quite a set of juxtapositions.

Another interesting tension was that between his clear awareness of the threat of deflation and his enthusiastic embrace of fiscal austerity for the eurozone periphery.

A member of the Dombret team thanked me afterwards for the “interesting” questions. I certainly came away from the exchange with a new appreciation for the resilience of those who have to butt heads daily with the Bundesbank and its “common sense”.

PrevPreviousThe Russian Revolution and the World. Notes on a Columbia panel.
NextNotes on the Global Condition: The UAE and the Geopolitics of the Horn of AfricaNext
related posts