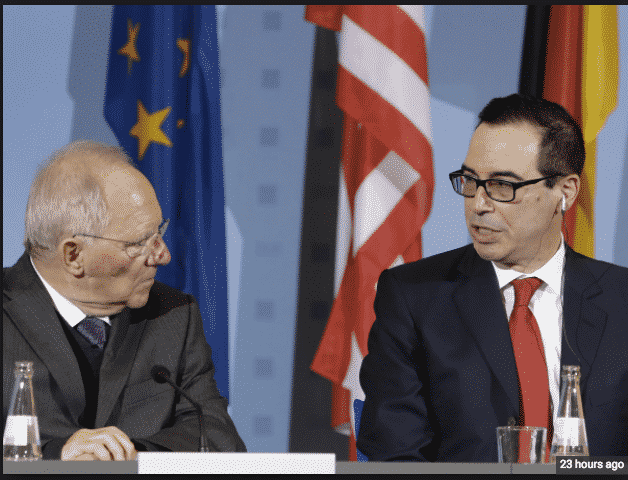 The other German-American encounter this weekend: Schäuble and Mnuchin at the G20 Baden-Baden March 2017

The state of US trade policy at this moment seems to be genuinely indeterminate, so much so that it has functional consequences for global governance. This at least would seem to be a reasonable inference from two reports on US trade policy in the FT in the space of less than 10 days.

On March 10 the FT, reporting on the basis of inside sources, described a “civil war” inside the White House over trade policy. “pitting economic nationalists close to Donald Trump against pro-trade moderates from Wall Street.” Navarro and Bannon on the one side square off with Gary Cohn of the National Economic Council in “a fiery meeting” in the Oval Office. “Mr Cohn and others have seized on Mr Navarro’s public comments — and widespread criticism by economists of his stand on trade deficits and other matters — to try and sideline him. That has led to discussions over moving Mr Navarro and the new National Trade Council he leads out of the White House and to the Commerce Department, headed by another Wall Street veteran, Wilbur Ross.” Cohn is predicted to take the lead in any NAFTA talks. Navarro is portrayed as an isolated loner, whereas Cohn was building a team in the West Wing and appointing figures such as Andrew Quinn who are anathema to Breitbart et al. The FT’s conclusion on 10 March: “The situation is less worrying than it was two months ago because [Mr] Navarro seems to be more and more marginalised,” said one European official. “His influence seems to be diminishing quickly.”  Thea Lee, a top trade official at the AFL-CIO, the US’s largest union, and a member of the president’s recently-appointed manufacturing council, said that Mr Trump appeared to be bending to the growing influence of the administration’s Wall Street veterans and walking away from his campaign promise for a fresh approach to trade.  “At the moment it appears that the Wall Street wing of the Trump administration is winning this battle and the Wall Street wing is in favour of the status quo in terms of US trade policy,” Ms Lee said.”

Parenthetically, the Washington Post did not agree with FT‘s diagnosis. In its own insider-sourced report (18 sources v. the FT‘s 6+) on the power battle inside the White House it reached an opposite conclusion to the FT. Featuring precisely the same cast of characters but ranging more widely than the FT piece, the Post too discusses the fight in the Oval Office over trade policy but concludes contrary to the FT, when: “”Cohn shrugged off Navarro’s ideas as almost irrelevant, according to two officials. Trump stepped into the conversation and defended Navarro and his point of view.” …  ““Show me one New York win,” a senior White House official said tauntingly.” Said another official: “Donald Trump is not the mayor of New York. Some of their ideas just don’t have a national constituency.”” Priebus the powerful chief of staff is frustrated at the Goldmanites for their transparent efforts to short-circuit the policy process. Might it be, one can’t help wondering, that the Trumpites and economic nationalists can actually see the Goldmanite threat coming and can read their cheerleaders in the FT? Will reincorporation work if it announces itself so blatantly and the cheers from the expensive seats are quite as loud as they are?

In any case, less than ten days after the Oval Office fight over trade policy and one disastrous visit to Washington by Chancellor Merkel later, and Treasury Secretary Mnuchin (another one of the Goldmanites) arrives at the G20 in Baden-Baden. He is a man of the world. Surely he will show the expected freedom of maneuver and endorse the global common sense. “New York” should win. But, to the consternation of all present Mnuchin “refuses to budge” on the most basic issue of all, free trade. As the FT reports it: “The US Treasury secretary, according to Germany’s finance chief Wolfgang Schäuble, appeared to have “no mandate” to settle his country’s position on one of the most pressing issues facing the G20 nations: free trade and protectionism. “We have reached an impasse,” Mr Schäuble said, later adding: “We did go to great lengths, we tried everything, we went down many avenues together and unilaterally.”” NO MANDATE! “For some G20 partners the refusal of the US to commit itself clearly to free trade marked the first step down a dangerous road. For others, agreeing to omit stronger language was a recognition that big battles lie ahead within the US administration over its economic nationalism, and there was no point staging a confrontation over the topic early in the presidency. The most immediate problem for the rest of the G20 is that they head into the summit of leaders, in Hamburg in July, with tremendous uncertainty over whether they can bring the US into the fold. The question now is, if Mr Mnuchin could not be persuaded to adopt a more conciliatory tone on trade, then what chance do they have with his boss, Donald Trump?”

In the mean time back in the bizarre press conference in Washington, Trump was banging on about non-existent “German trade negotiators” and Merkel was left to smirk in disbelief.

The FT‘s conclusion? “Unable to convince Mr Mnuchin in Baden-Baden, the rest of the G20 must now play a waiting game until that July meeting. It will hope that by then the US has decided what it wants to do with its role in a world order it has done more than any other country to shape.”

What can we infer from this reportage: (1) The direction of trade policy is truly up for grabs, genuinely undecided. It is not evident that the big battalions of globalization have won or are going to win. (2) The Trump administration is at sea in a way that the governments of few big states have been in recent times, certainly on an issue that is not one of crisis, but of first principles. (3) In this sense the previously prevailing common sense of free trade has been ruptured. (4) To gauge the scale of this break you really cannot confine yourself to the power struggle in Washington, or the way it plays in Congress or with American sectional interests. You can’t really do justice to the scale of the rupture unless you recognize the bewilderment and uncertainty it creates amongst the other powerful actors in the global system.

How will things play out and what will it mean? We clearly don’t know. The best informed people in the world don’t appear to know. But trade is a crucial test because it is seems to be shaping up as an issue on which the “Wall Street wing” does want to make a stand and it is undeniably a core issue for Trump. Or is that simply the FT and the FT-in-me talking?