Notes on the Global Condition: Deciphering America’s 2008 crisis as a crisis of globalization. 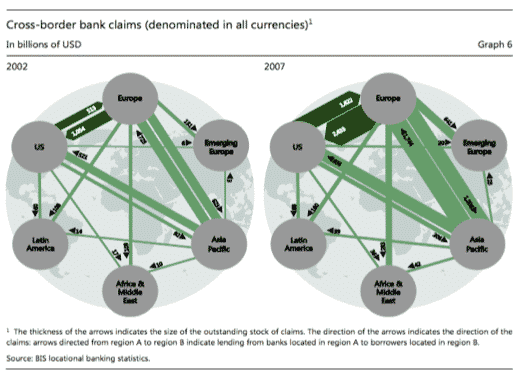 The need for a pluralist, complex mapping of globalization was brought home to me by thinking about narratives of the 2008 crisis.

“Global imbalances”, most dramatically the current account imbalance between the US and China and the attendant accumulation of US assets by China, play a key role in many accounts of 2008 – e.g. Bernanke’s savings glut story. But the much feared Sino-American dollar-rout, bond sell-off sudden stop scenario never materialized. See the blogpost on dollar scenarios from a few days ago. https://adamtooze.com/2017/02/14/notes-global-condition-dollar-questions/

Instead, what we witnessed in 2007-8 were what appeared to be a series of national real estate booms that went bad. This was the basis for the financialization story, the story of how financial engineering was hooked to real estate to generate the engine of disaster that was shadow banking. This can be told, and often is, as an American story. Alternatively, it can be told as American, Irish, British, Spanish, Dutch stories on a case by case basis. Every country has its own variation on the general craziness.  The left version of the narrative is that of “privatized Keynesianism “, in which a private debt buildup replaces state spending as a driver of growth (a response conceived of one nation at a time, driven by legitimation problems generated by national social formations and political systems).

The upshot: a narrative of a globalized crisis that did not occur (the China crisis), gets displaced by national stories of  societal imbalance, financial engineering run amok, bad regulation etc.. Globalization bleeds out of sight, as we focus in on the arcane details of securitization, and on the fading American dream (and its European counterparts) that is widely thought to have motivated the boom and bust cycle.

Books like Rajan’s faultlines try to combine the global imbalances with the domestic faultlines story, but can’t quite make the logic stick when it comes to the crisis of 2008 itself. They can predict a crisis, but not the one that actually happened.

The breakthrough of the macrofinance literature, associated above all with the BIS (Shin, Borio and others), was to bridge this gap by insisting that there was an essential “global” dimension to the financialization story. It involved not China, but above all the global dollar banking system that is anchored outside the US in the City of London. Europe’s rapidly expanding, globalizing banks made themselves into the owners of perhaps as much as 1/4th of the mortgages securitized in the US and an even larger share of the most risky mortgages securitized in 2006-2008. Did Europe run a trade surplus with the US to “finance” this acquisition of US assets, like the Chinese did? No. That was the magic of the truly integrated, North Atlantic financial system. The Europeans didn’t need to. European banks operated effectively like US banks, but on an even riskier basis, sourcing various types of short-term funding in the US to fund lending in the US, or exchanging sterling and euro-denominated funds to finance dollar lending.

So, rather than a story in which China’s emergence as a manufacturing power house, the crisis in the American industrial heartland, the irresponsible mortgage boom and the growing indebtedness of the American state to foreign sovereign wealth funds, line up as if on a single skewer, what we are dealing with in the 2008 crisis are (at least) two interrelated, but distinct processes of globalization. The peculiar state-regulated nature of China’s balance of payments creates a relationship between its manufacturing surplus and its acquisition of US Treasuries as reserve assets. But at the same time the global fuel for America’s mortgage boom came through the gigantic balance sheet expansion in US and European banking.

Not only are the economics of the two processes of globalization radically different, so too are their geopolitics. The US-China relationship was quite consciously managed, by both sides, in terms reminiscent of the Cold War, as a “balance of financial terror”, complete with “financial summits”, hotlines etc. By contrast, the North Atlantic financial system was a zone of depoliticized and deregulated financial integration. It was the zone par excellence from which the state retreated, where privatized risk management was supposed to prevail. As 2008 revealed this was woefully inadequate and the survival of the system in fact depended on scrambled cooperation between leading central bankers. It was a terrifyingly fragile basis on which to have conducted trillions of dollars of business. (NB the balance sheet expansion within the North Atlantic financial system dwarfs in its scale even the gigantic trade flows between China and the US. It is measured in trillions of dollars not hundreds of billions).

The plural approach to globalization I am proposing (https://adamtooze.com/2017/02/16/notes-global-condition-plural-taxonomy-globalization/), seeks to generalize this disjuncture revealed by 2008. The aim is to highlight the many different vectors of globalization at work and their distinct political economies. The sectoral boxes are a crude way of doing this. The proof of the pudding will be in the eating.

In the crisis of 2008, shockwaves spread out from the US mortgage boom, to the North Atlantic financial system. The Sino-American axis was stabilized by high level diplomacy on both sides and the Fannie Mae and Freddie Mac nationalization, which secured a huge Chinese investment. So the financial crisis did not shift to the Sino-American axis. But, the financial implosion delivered a huge shock to the global division of labour. Import demand crashed. The global shipping business went into crisis, so the global logistical system went into shock and has still not recovered. Commodity prices plunged. The sectors all interact, but they have their own distinct crisis logic.

Then add to the mix the noteworthy coincidence that 2008-9 is the moment at which the new social media – facebook and twitter – begin to develop critical mass and begin to transform the media system, changing the way in which the entire tangled process was communicated about.

It was trying to understand the complexity of this historical moment that suggested to me the need to build a more plural map, in which things don’t easily reduce to each other.