German Question(s): The New Germans and the Old Germans

How have Germany and Germans changed? In a recent piece in the Economist Jeremy Cliffe painted a fascinating picture of an increasingly pluralistic society that is both more open and more fragmented. 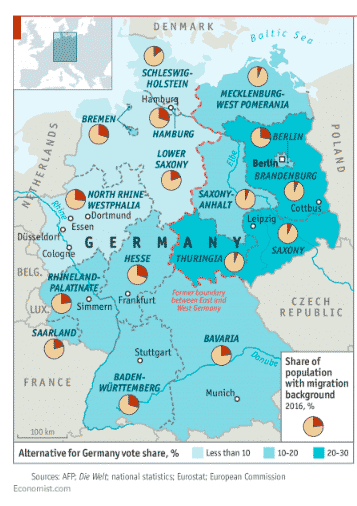 This is a result of complex, economic, social, demographic, cultural and political changes over recent decades. To add more historical depth to the analysis, I thought it would be helpful to construct a simple demographic snap shot which can be combined with the bare bones of generational biographies to help us understand the current configuration of German public life.

Given Germany’s turbulent history it has mattered a great deal where you were born and when. Not for nothing Helmut Kohl took up the phrase, “die Gnade der späten Geburt” (the mercy of being born late) from the journalist Günther Gaus. If you happened to have been born after 1930 you did not face the question of how you had related to the Nazi regime. It was a disconcertingly impersonal but also sociologically realistic assessment.

In the 1980s the chronological demarcations still revolved around the earlier twentieth century. What happens if we apply a similar optic to the Germans alive today? For answers we can turn to the demographic data published by the Statistisches Bundesamt.

Of the 82.5 m people living in Germany in 2016, c. 30 percent are 30 or younger. Born since 1986, they have little or no memory of a Germany prior to reunification. Unification is simply a fact of life. Germany is a country like others. One marker can be found in language. For these younger cohorts, their home is not the “Bundesrepublik” but”Deutschland”. References to the constitutional form are a fussy reminder of an earlier age, when such things mattered.

At the same time as their national identification has become simplified, an unprecedentedly large percentage of this younger cohort are either foreign or what German statistics now refer to as “people with migration backgrounds”. According to the German statistical office a third of those living in Germany today under the age of 25 have a “migration background”. Of that group the vast majority (amounting to 25 % of the entire cohort) are the children of adults who have migrated to Germany since the 1950s. 8 % of the cohort below the age of 25 actually migrated themselves. 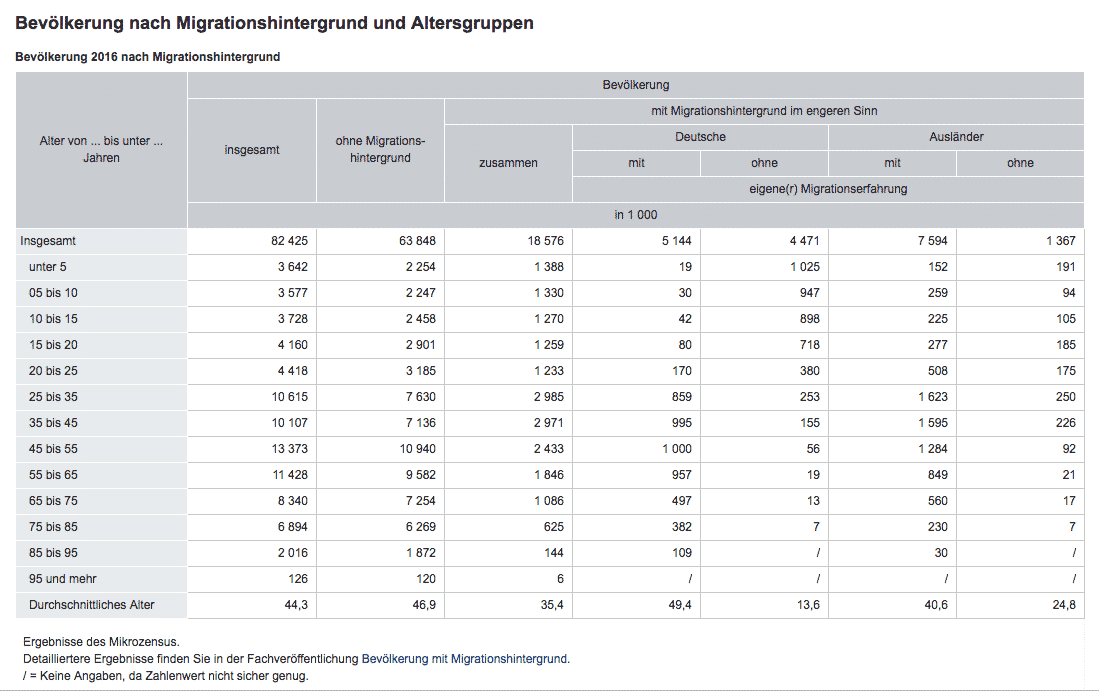 These younger people – German and foreign – below the age of 30 play an increasingly important part in shaping German youth culture and the urban scene. But they are not yet prominent in public life or in positions of power. Nor are they wealthy or occupying commanding positions in the economy, except as heirs to the huge avalanche of wealth descending through German society. 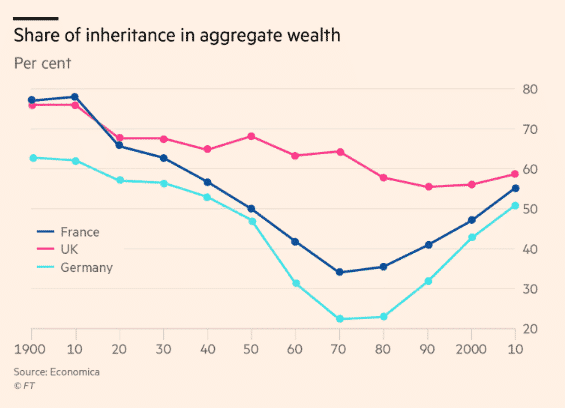 At the other end of the historical spectrum 6 % of people living in Germany today were born in 1936 or before. Adding those born in the late 1930s, c. 10 % of the German population might be expected to have some memory of the Third Reich and the war years, before defeat, occupation and division. They lived the entire drama of disaster, division, reconstruction, the boom years and then reunification.

In public life such figures are increasingly thin on the ground. But they include intellectuals such as: Jürgen Habermas born in June 1929 in Düsseldorf and the historian Heinrich August Winkler born at the end of 1938 in Königsberg. Writer Günter Grass, born in 1927, was perhaps the last prominent German to foul fall of Kohl’s version of the iron law of chronological fate. In 2006 Grass a Nobel Prize winner and liberal conscience of the nation, caused outrage when he revealed that at the end of the war he had served briefly in the Waffen SS. 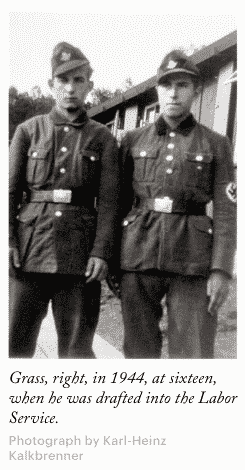 Once common, such biographies are now increasingly rare. Known as the Flakhelfer or Hitler Youth generation, for the most part the older members of this age group handed off the baton of power in the 1990s.

The hitherto dominant group, are what might be called the true “postwar” generation. Born between the early 1940s and 1956 (the cut off points here are arbitrary and set by the statistical classification applied for 2016), accounting for 20 % of the population, the childhood of these postwar Germans was deeply marked by the war and its aftermath. They also experienced the economic miracle and the coming of mass affluence with striking force. They literally grew up amongst ruins. Many of them never knew their fathers. They lived a national success story still marked by direct experience of reconstruction. Their grandparents, mothers and fathers made the economic miracle. As young people they experienced the youth culture of the 1960s. They were the young activists of 1968. This group are now towards the end of their careers or already in retirement. But in 2018, they are wealthy and still in many cases influential in public life. They continue to set the tone in important ways.

Politicians and economists from amongst this group include both Wolfgang Schäuble and Angela Merkel. 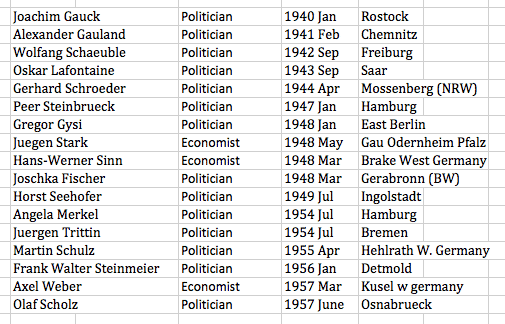 Today, these postwar cohorts are progressively handing off power and control in economic life to the successor cohorts who were born between 1956 and 1976. Accounting for 29.4 % of the population, these are the Germans most deeply shaped by the Cold War. They grew up in a divided country, in consolidated West and East German states with very different political systems, societies and cultures with little prospect of reunification.

In the West they have been described as “Generation Golf” i.e. a generation defined emblematically by Volkswagen’s replacement of the much loved Beetle, with its checkered history, by the functional, modernist Golf model of 1974. 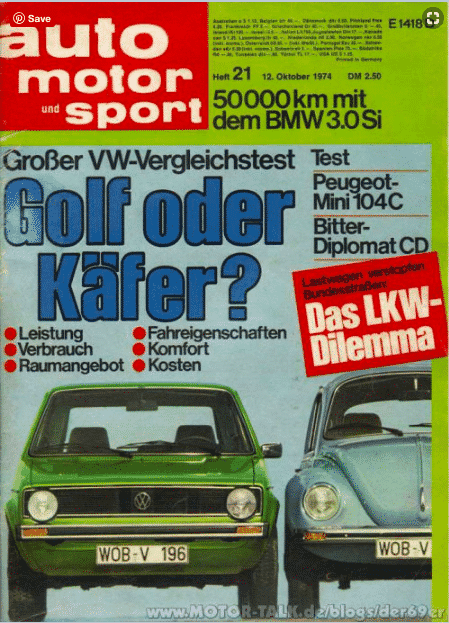 From this cohort are recruited the younger politicians, commentators and journalists whose adult lives were dominated by the late phase of the Cold War, the passionate arguments over atomic power, cruise and Pershing in the 1980s, reunification, Red-Green and the Merkel era. 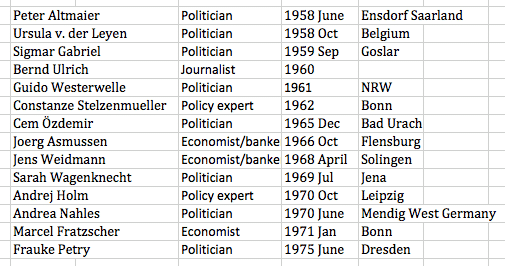 Though this selection is anything but systematic, one striking feature of this generation of German public figures is the shifting gender balance.

In other respects, however, Angela Merkel’s long period in power is thought to have stunted the generational succession that might otherwise have catapulted members of the late 1950s early 1960s cohorts to the very top by now.

It will be interesting to see whether Generation Golf find themselves leapfrogged by the senior members of the cohorts who grew up largely in a unified Germany. So far the most high profile figure from that cohort is probably the Health Minister in Merkel’s fourth cabinet, the noisy Jens Spahn (born in 1980 in NRW).

Where and when you were born still matters and has its party political counterpart in the question of Red-Red-Green coalitions i.e. the question of whether the SPD and Green parties can govern in coalition with Die Linke, whose inheritance includes reformed components of the former Communist regime in the GDR. Since this is the only possible left-wing alternative to a CDU-dominated government in Germany, it is a crucial political question.

In 2016 the city of Berlin began an experiment with a Red-Red-Green coalition. The significance of this is hard to exaggerate. It implied the acceptance of Die Linke by the SPD and the Greens. In historical and biographical terms it implied a layering of the old West German anti-communist SPD, the Greens as the inheritors of the protest cultures of the 1960s, 1970s and 1980s, with the heritage of the Communist left.

Prior to 2016 there had only been one such government before, in Thuringia, in the former GDR. Red-Red-Green in Berlin brought the experiment at least symbolically much closer to the West.

A prominent member of the new administration was Andrej Holm. At age of 46 in 2016 he was a well-known expert and critic of urban gentrification with a reputation as a strong reputation as a leftist. As such he was an obvious appointment for die Linke to head up Berlin’s housing and construction policy as Baustaatssekretär. But in January 2017 he was forced to resign having been abandoned by the SPD and the Greens.

Holm was born in Leipzig in 1970, the son of a prominent Stasi officer, the grandson of an anti-fascist survivor of Sachsenhausen concentration camp.

He made not secret of the fact that as a teenager he had been a loyal supporter of the regime. Already ten years earlier in 2007 he had stated that he aspired to a career in Stasi. But back in 2005 when he joined Humboldt university it emerged that Holm had not made full disclosure of the extent of his involvement. Holm was in fact amongst the last handful of true believers to take the Stasi’s oath of loyalty as a cadet in the Felix Dzerzhinsky guards regiment.

He did so in September 1989, weeks before the Wall came down, months before the Stasi was declared a criminal organization. As Holm himself admitted he became terrified over the summer of 1989 that he might received a “Tiananmen order” to shoot down his fellow citizens. But it was too late. He was committed. He had made the choice already at the age of 14, as the GDR’s tracked system of education demanded of ambitious teenagers. Given his background, in a sense Holm’s path had alway predestined. Looking back Holm admitted to feeling fortunate that it ended in a dead end and not a bloodbath. 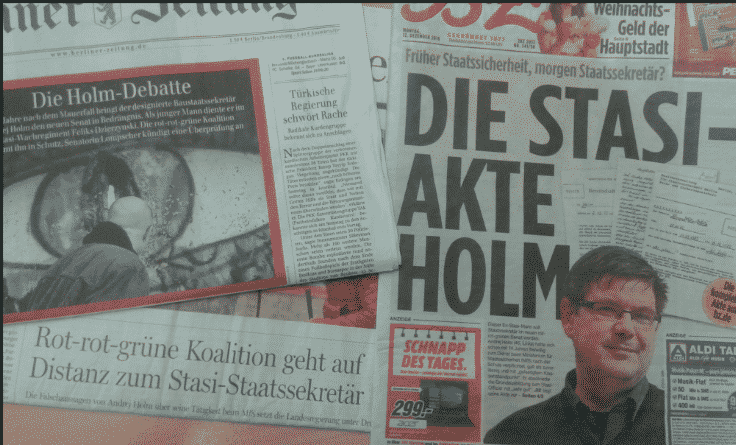 Such a person, the Greens and the SPD now declared, was insupportable. The Left party protested that this should not end Holm’s career. But the entire government was a gamble on precisely the question of whether Germany could overcome its past. Holm had to go. He was lucky, after a humiliating public apology, to keep his job at the Humboldt University.

As Helmut Kohl might have observed, 1970 was an unfortunate year to be born to the “wrong” family in Leipzig.