Notes on Social Theory: Reading Policing the Crisis in light of the politics of austerity 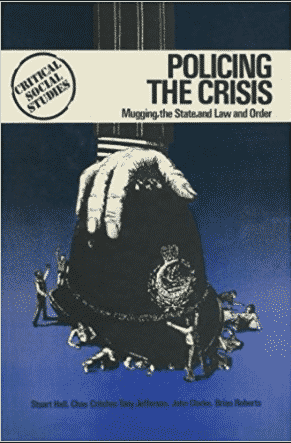 POLICING THE CRISIS MUGGING, THE STATE, AND LAW AND ORDER By the Birmingham school collective of Stuart Hall, Chas Critcher, Tony Jefferson, John Clarke and Brian Roberts came out forty years ago.

It is one of the texts that Columbia’s new reading group in critical theory engaged with this term. Organized by Barnaby Raine (I help pay for food) the group was one of the highlights of the 2017-2018 academic year.

Returning to Policing the Crisis was so inspiring that we plan to organize next fall’s activities of the reading group around the literature that Hall et al draw on, starting with Althusser and Poulantzas.

Notionally the topic of the book is the racialized moral panic around street crime (mugging) in 1970s Britain. But it is a brilliant piece of Marxist analysis precisely in the way that it expands out from that particular problem to offer a panoramic overview not just of British history but of capitalist social and political order on a global scale, culminating with the astonishing conclusion, “From Harlem to Handsworth: brining it all back home”.

Much of our discussion revolved around the conceptualization of totality that this maneuver draws on. This is where Althusser and Poulantzas are crucial. The contrast to Lukacs which we read in the penultimate session is striking and I hope to blog about this soonish.

The backdrop to Hall et al’s interpretation is the diagnosis of a profound crisis of hegemony in 1970s Britain that would set the stage for Hall’s reading of Thatcherism in the 1980s. But what struck me on this reading was the relevance of their analysis also for thinking about more recent history.

Just take the title “Policing the Crisis”, how can one not think of the Eurozone? Perform a little creative paraphrase and you would get “Policing Europe’s crisis: debt, the state, law and fiscal order”.

Given the richness of Hall et al’s text, a comprehensive reading of our current predicament in terms of their analytical framework would be a major undertaking. As a tiny down payment consider just one fragment: their discussion of how “signification spirals” sustain moral panics. 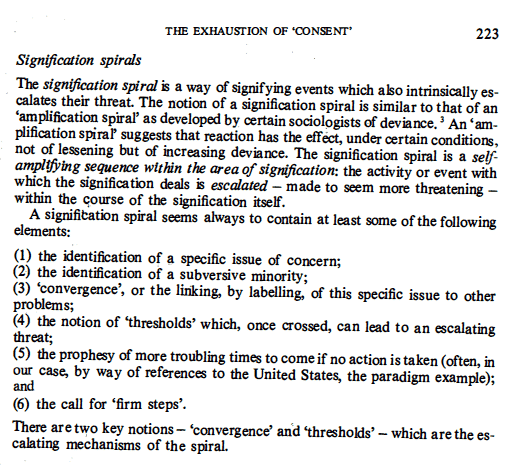 How easily this framework could be applied to the politics of austerity in 2010!

(1) Identify a specific issue of concern – debt or debt/GDP.

(3) Convergence or linking of this issue to other problems – debt is a “symptom” of indiscipline (since the 1960s), “clientelism”, lacking competitiveness.

(5) Prophesy – contagion, a crisis sweeping from the PIIGS to the Eurozone and from there to the entire European project, the threat of a return of European war.

Given how well the framework applies, I was surprised to find that google-scholaring “moral panic & austerity” and “signification spiral & austerity yielded” no hits.

Am I missing something? Does anyone have any pointers?