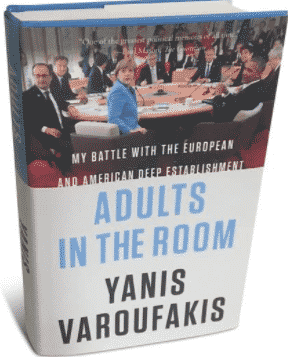 Since it appeared in 2017 Yannis Varoufakis’s Adults in the Room has attracted a number of thoughtful reviews. Broadly, these fall into three camps.

The camp to which my own effort in the New York Review of Books belongs, takes Varoufakis seriously as a witness both to the potential and limits of a certain kind of left-Keynesian politics. These readings have in common not only that they are sympathetic to the frustration that Varoufakis experienced at the hands of the Eurogroup and the “financial institutions”, but that they identify a basic blind spot in his approach, or in his account of his approach to Eurozone reform. It is a blind spot characteristic of Keynesian thinking about policy. In the terms of Geoff Mann and his brilliant diagnosis of Keynesian politics, Varoufakis regards the Eurozone as resulting from an intellectual and political “muddle” (“muddle” is Keynes’s preferred description). Policies were pursued that made no sense in their own terms as a result of short-sighted maneuvering by politicians and bureaucrats. This allows Varoufakis to position himself as the good doctor who by means of his insights will open a way out of the impasse from which all sides will ultimately benefit.

Rather than repeating my own words, I will quote J.W. Mason’s characteristically full and subtle reading in the Boston Review. Varoufakis justified his participation in the Syriza government, with which he had many differences, on the grounds that there was a muddle to fix. And, as Mason points out, no experience, however depressing could cause

“him to question his assumption that good ideas are what matter. Even when Schäuble tells him bluntly in a one-on-one meeting that “I am not going to negotiate with you,” Varoufakis goes on gamely trying to make a deal. Right to his last days in office, he is offering new proposals, all vetted by the highest authorities. …. “

How did the Eurozone end up in this mess? For Varoufakis

“the MoU and the larger austerity agenda were embraced opportunistically by politicians who did not want to admit that the first bailout had handed over public funds to their own banks. Blaming Greek profligacy was the politically easier cover story. “The sole reason that the IMF and EU were asphyxiating us [was] because they did not have what it took to confess the error” of the earlier bailouts, he says. Austerity, in this telling, is not a goal in itself, but merely “a morality play pressed into the service of legitimizing cynical wealth transfers from the have-nots to the haves during times of crisis, in which debtors are sinners who must be made to pay for their misdeeds.”

What for Varoufakis is harder to accept is that there might have been other reasons. Perhaps there was no mistake and no muddle.

What if, “austerity and the rolling-back of social democracy were the goals all along, for which the Greek crisis simply provided an opportunity. In this version, Greece was subject to “fiscal waterboarding” not to avoid acknowledging the earlier bailout, but precisely to force compliance with the MoU—and even more, to provide an example for other governments in Europe.

It is clear why Varoufakis prefers the first story: the logic of his position in government required something like it to be true. If austerity were not an accident, a mistake—if the authorities would not in principle be just as happy with an active, egalitarian Greek state—then what was he sitting in all those meetings for? You can’t walk into negotiations unless you believe that a mutually satisfactory agreement is at least possible.”

But the harsh reality, which Varoufakis’s time in office clearly exposed, is that

“the creditors were not just looking for a politically palatable way to avoid responsibility for their earlier failures. They were sincere and consistent ideologues, striving to remake Europe in the model of an idealized free-market society. Varoufakis recounts these stories masterfully, yet curiously they never seem to shake his view that a mutually beneficial deal is just around the corner.”

Mason’s review is great reading as is his blog at slack wire.

Both Mason and my own reviews offer sympathetic criticism. A related criticism from a Marxisant perspective is made by Pavlos Roufos in the Brooklyn Rail. His title is a manifesto: ‘Inside the disenchanted world of left-Keynesianism”. Interestingly, Roufos directs his fire at Varoufakis’s ultimate bargaining chip, a stratagem I have described as the “dirty bomb” (i.e. the poor man’s nuclear option).

Let us grant, Roufos argues, that Varoufakis was not caught in the Keynesian labyrinth to the extent that both Mason and I suggest. Let us take at face value Varoufakis’s occasional protestations that he did not in fact believe “that the unquestionable logic and obvious moderation of my proposals would win our creditors over”. If not by argument, how then was he going to defend Greece’s interests as he understood them? The answer that Varoufakis urged on Tsipras was that Athens should threaten to politically destabilize Draghi’s QE program by means of a default on the Greeks bonds held by the ECB. This would lift the protective financial shield that Draghi had extended to the rest of the Eurozone “periphery”. It would unleash the risk of financial contagion and restore Greece’s bargaining power.

It was a shockingly radical proposal that threatened to make Portugal and Spain into collateral damage. Tsipras was never willing to unleash it and much of Adults in the Room is taken up with narrating that failure. For Roufos this tactic is itself revealing. It exposes a belief on Varoufakis’s part not only in the force of sweet reason (the critique that Mason and I make) but in legality as such, as a constraint on the actions of the power bloc that dominates the Eurozone.

For Poufos, “(t)his approach, however, betrays a misreading of the recent history of crisis management, during which it has been demonstrated time and again that abstract legal principles do not stand in the way of important decisions. In point of fact, a careful reading of post-2010 policies (both at the Eurozone and the country level) reveals that “flexible” interpretations of legal formulas or their complete overlooking is more often than not the actual background of economic policies.1

And beneath this lies a deeper misunderstanding that Poufos teases out as follows:

“The abstract understanding of the law as a crystallization of the essence of capitalist social relations that Varoufakis and others promote leads to quite a few mystifications. Perhaps most importantly, it misconstrues capitalism as a set of relations held together (and engendered) by legal statutes, whose importance surpasses that of, say, profitability. By not recognising that the content of capitalism (a historical form of social organisation of production that utilizes class divisions to achieve value creation) is reflected in (but not determined by) legal forms, this approach is not only theoretically invalid. It also results in an inability to properly situate the underlying logic of the contemporary crisis management model, which attempts to both avoid the collapse of a central pillar of the capitalist economy system (finance) and to act as an opportunity to (finally) impose in full force the monetary discipline (low state spending, low deficits, low inflation) that peripheral Eurozone countries had avoided through their ability to roll over debt due to low interest rates. It is true that in certain instances, Varoufakis appears to have a fleeting sense of this predicament. For example, in a passage about the background of the first Memorandum Agreement, Varoufakis himself admits, “When the French banks faced certain death, what choice did [Lagarde] have as France’s Finance Minister, alongside her European counterparts and the IMF, but to do whatever it took to save them?” This thought is, however, not further developed. Instead, Varoufakis considers the legal framework of the ECB as a given, a line of reasoning that forces him to explain the failure of his strategy as a result of the refusal of Tsipras to implement it when the shit hit the fan.”

Criticism from the left of a very different kind is offered by the debt campaigner Eric Toussaint. The Verso website has published a multi-part series of articles that dissect Varoufakis’s ambiguous relationship to Syriza. As Adults in the Room makes clear, Varoufakis was at odds with many of the basic positions of the Syriza movement and he did his best to turn the party away from its Thessaloniki program of September 2014. As Toussaint puts it:

“Varoufakis explains how he gradually convinced Tsipras, Pappas, and Dragasakis not to follow the orientation adopted by Syriza in 2012, then in 2014. He explains that along with them, he worked out a new orientation that was not discussed within Syriza and was different from the one Syriza ran on during the January 2015 campaign. And that orientation was to lead, at best, to failure, and at worst to capitulation.”

Toussaint offers an account from the perspective of the Syriza left-wing of the way in which Varoufakis did not just espouse a rationalist Keynesian perspective, but in doing so subverted the militant energy of Greece’s left government and shifted the balance of expertise in the government towards those who were willing to work with the troika.

Whether one finds them sympathetic or not, Toussaint’s essays deepen one’s understanding of the Greek political scene in which Varoufakis and Tsipras operated.

Eleftheriadis has long been a critic of Syriza. In the September 2015 elections he stood as a candidate for To Potami, the centrist, pro-EU party that many had hoped would be Syriza’s coalition partner. Eleftheriadis’s interest is not in diagnosing the aporia of Varoufakis’s Keynesianism, but in denounce the damage he claims that Varoufakis and the Syriza government did to the Greek economy. Anyone who does not share that interest in reading Adults in the Room is objectively a fellow traveller who must be combated as such. It is the argumentative position of the engaged and highly informed partisan and, whether one agrees or not, interesting as such.

PrevPreviousAmerica’s Political Economy: How college attendance varies with parental income
NextWar in Germany: 1848 and the impasse of conservative militarism in PrussiaNext
related posts