German Question(s): The life and times of Habermas

Highly recommend two insightful reviews of Müller-Doohm’s new Habermas biography one by Peter Osborne in the latest edition of New Left Review the other by Matthew Specter in the latest issue of Modern Intellectual History. 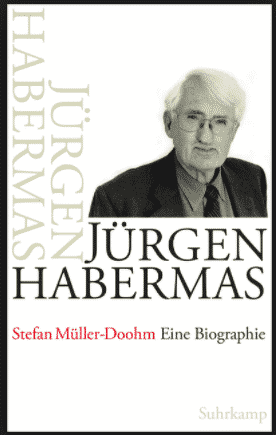 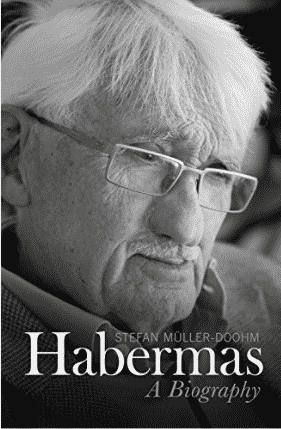 I’ve not had time for the book yet, but the reviews themselves are worth reading for a series of sharp observations about the development both of Habermas and Germany’s postwar intellectual and academic scene.

Osborne starts with a striking contrast between Ralf Dahrendorf and Habermas. Both these leading figures of postwar West German intellectual and political life were born in 1928. As the Nazi regime made its final stand in 1944 both experienced formative political shocks. Dahrendorf, son of an anti-Nazi SPD leader and teenage activist, was arrested and sent to a Gestapo jail in Frankfurt an der Oder from which he was liberated by the Red Army. Meanwhile, Habermas, whose father was a conformist nationalist and member of the Nazi party since 1933, was drafted into the Hitler Youth to defend the Siegfried Line.

I can’t get this image, reproduced by a local newspaper, out of my head. It puts Habermas’s early writings in the early 1950s under the influence of Heidegger, Gehlen, Rothacker in perspective. As Osborne remarks: “There is a tendency to think of German fascism as the experience of the generation of the Left in the 1930s, but the leading literary and cultural figures of Habermas’s generation—Heinrich Böll, Hans Magnus Enzensberger, Günter Grass and Christa Wolf—had a more intimate sense of the everyday actualities of its political culture.” In fact there is no reason to choose one perspective rather than the other. The experience of those who came of age in WWI/Weimar e.g. Arendt or Brecht, was simply different from that of the Flakhelfer/Hitler Youth generation. That difference would structure the interaction between the two generations in the 1950s and 1960s.

As Osborne glosses Müller-Doohm: “So, what, for Müller-Doohm, are the main biographical events of Habermas’s life? There are three that give distinctive meaning and justification to his narrative. First, the biological fact of having been born with a cleft palate that required childhood surgery, leaving Habermas with a speech impediment. Second, the public revelation in postwar Germany of the Nazi Judeocide. Third, Heidegger’s failure to acknowledge culpability for his own fascism, in the 1953 publication of his 1935 lectures on metaphysics. Together these three events are taken … to have led to a crusading attitude towards speaking out about the lack of public self-reflection on the history of German fascism, a self-reflection that Habermas came to see not only as the condition of building a democratic political culture, but as more or less synonymous with that culture itself. In this respect, although Müller-Doohm does not make the connection, Habermas’s Habilitation thesis and first book of 1962, on the ‘structural transformation of publicness’ (Öffentlichkeit), can be read as a direct polemical renunciation of the elitism of Heidegger’s Being and Time, in which Öffentlichkeit is a central category, constituted by ‘distantiality, averageness, and levelling down’ as ways of being of ‘the they’. ‘By publicness’, Heidegger wrote there, ‘everything gets obscured, and what has thus been covered up gets passed off as something familiar and accessible to everyone.’ (The translation of Öffentlichkeit as ‘public sphere’ in the 1989 English edition of Habermas’s book, The Structural Transformation of the Public Sphere: An Inquiry into a Category of Bourgeois Society, both obscures this philological-political connection and robs the concept of the residual, negative philosophical depth that shadows its relocation to the discourse of historical sociology.)”

Specter’s own biography of Habermas is highly recommended. It offers a compelling account of the continuity of Habermas’s thought, stressing the interconnection (that Habermas himself struggles to come to terms with) between his political engagements and his philosophy. 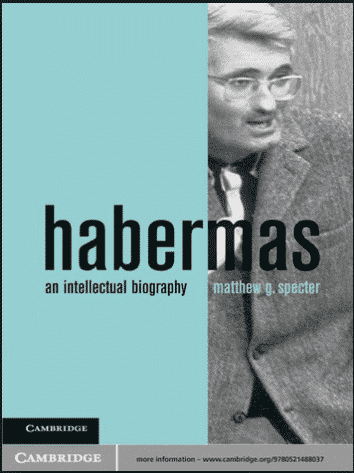 Both Specter and Osborne note that buried in Müller-Doohm’s massive book is a stinging critique of Habermas’s role in policing the public sphere of modern Germany. The question is not so much about the substantive coherence at the level of thought between Habermas’s philosophy and the positions he adopts in public, as the tension between his support for open, power-free communication and the vigorous and at times ruthless way in which he has engaged in public polemics and defended his own status.

As Specter remarks:  “No one has been harsher in his critique of Habermas than Peter Sloterdijk, who in 1999 pushed this argument to its reductio ad absurdum. As he is quoted by Muller-Doohm, “The whole left-liberal bloc consists of faint Habermasians . . . ¨ [It is in fact] a large majority [practicing cultural hegemony but] understands itself as a persecuted minority . . . [It has a] monological concept of truth which takes great pains to appear in dialogical camouflage . . . at bottom, Habermas has always remained nothing but a theoretician of reeducation” (316). Muller- ¨ Doohm does not go this far, but argues that,“According to Habermas’s ideal, intellectuals do not strive to exert strategic influence on the political struggle for power, but help create a pluralist public sphere” (253). The German “1968” was as divisive as its counterpart in the United States. In Germany, the backlash against the ’68ers’ demands for cultural and political reform took the form of the rise of a neoconservative intellectual tendency or “liberal-conservative” bloc.  Muller-Doohm correctly asserts that when Habermas battled the representatives ¨ of these tendencies, he “frequently and consciously made use of the arsenal of weapons used in ideological warfare . . . knowing full well that the politics of ideas he thus practiced would have a polarizing effect, would simplify the arguments, and would contradict his ideal of the enlightenment. [To him it must have seemed] that the ends did justify the means” (262).4”

In the MIH, Specter twins his discussion of Müller-Doohm with a respectful review of Martin Jay’s latest outing on the Frankfurt School and the history of reason. This for Jay is a lifelong commitment. But close attention to Habermas’s intellectual development from his youthful Heideggerianism to his linguistic turn in the 1970s leaves one puzzled as to the precise nature of the connection between Habermas and his supposed predecessors. Habermas did not start out as an adept of critical theory. His relations with Horkheimer were famously rocky.For his intellectual and professional path away from Heidegger, Heidelberg and Gadamer’s hermeneutics were more important than Frankfurt and the Institute. In the 1970s not only his linguistic turn, but the depth of Habermas’s engagement with Luhmann’s system theory and his espousal of an evolutionary framework raise similar questions.

Will a historicization of Habermas lead us to abandon the idea that he belongs to the Frankfurt School at all? As Specter puts it: “Writing in the Frankfurter Allgemeine Zeitung, Karl-Heinz Bohrer maintained, in Muller-Doohm’s paraphrase, that,“it was wrong to subsume Habermas under ¨ a Frankfurt School that had been inflated to mythic proportions” (166). For Muller-Doohm, too, it is little more than optical illusion to consider ¨ Habermas the representative of the Frankfurt school. “He is connected with the . . . Frankfurt School . . . because he was present . . . in the decades [of liberalization] . . . This role made him the main representative of the second generation.” Or it is the “trivial” effect of his assumption of Horkheimer’s old chair in 1964. Provocatively, he argues that what makes Habermas a recognizable representative of the tradition of critical theory is his interventionist stance in the public sphere more than any aspect of his philosophical program (4–5).”

But Specter does not want to leave it there. To argue for a connection that runs largely in terms of Habermas’s political engagement and not his philosophy is “peculiar” since both Müller-Dohm and Sepcter are invested int he idea that there is a “constitutive relationship at work between Habermas’s careers as citizen and philosopher”. So, Specter asks, “(h)ow could Habermas be critical theorist in one role and not in the other … ? Muller-Doohm could ¨ refer us to Habermas’s own statements: “What annoys me terribly,” he once remarked disapprovingly, “What gets to me, is the aggressiveness of people who do not see the role-differentiation in me” (5). But Habermas is not the final authority on the meaning and coherence of his career, the porousness or purity of its boundaries. To wit, Habermas has also contradicted himself on this point, saying at his seventieth birthday celebration, “The public sphere as a space of reasoned communicative exchanges is the issue that has concerned me all my life. The conceptual triad of ‘public space,’ ‘discourse,’ and ‘reason,’ in fact, has dominated my works as a scholar and my political life” (317, italics mine).”

As Specter rightly insists, it is this that makes Habermas “central to the critical tradition in German social philosophy” whether or not that is identified with the Frankfurt school. It is this, sharp elbows and all that makes him into such a key figure in modern German history, right the way down to the present day.

PrevPreviousNotes on the Global Condition: NSS 2017
NextEurope’s Political Economy: Mario Draghi and the eurozone’s crisis winter of 2011-2012Next
related posts