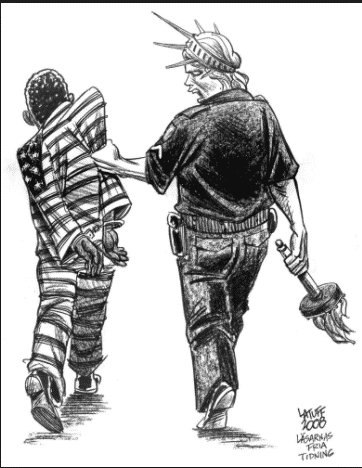 In the 1970s America embarked on a ghastly experiment in mass incarceration. This is part of a wider process of criminalization, driven by shifting race relations, the “War on drugs” and local law enforcement politics. It is anomalous in international comparison and its impact is clearly ruinous. Living in any American community you feel its impact all around you. But how big is it footprint? How can it be quantified?

One index is the scale of the prison and jail population at any moment in time. It soared from c. 400,000 the mid 1970s to 2.3 million in 2010. This is appalling but it understates the impact of criminalization because it does not count those who have been convicted of felonies and not incarcerated. Furthermore, it counts only those currently detained, rather than the entire population of people, mainly men, who have been processed by the system and bear its stigma for the rest of their lives.

Calculating the size of those wider populations requires one to consult a wider array of data not only on the prison and jail populations, but also those on parole and those convicted of felonies as a whole. It also requires us to move from the flow of people processed by the system in any given period to the stock of those who have been affected by it over a period of decades. 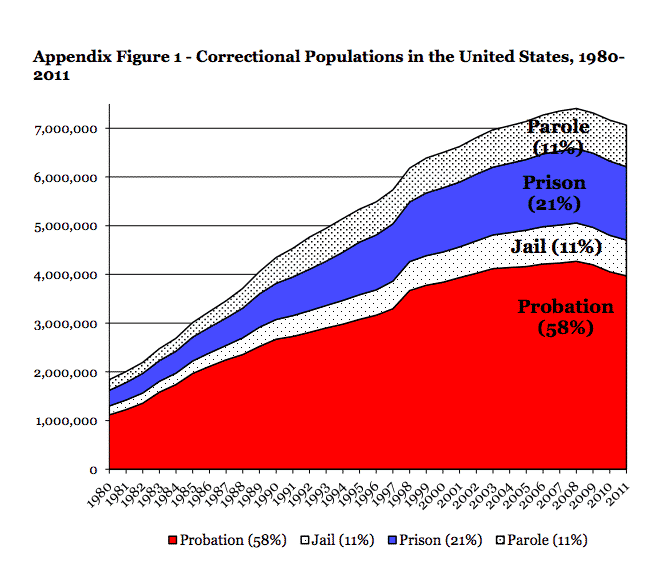 To calculate the entire population touched by the system one has to make certain demographic assumptions about the rate at which ex-prisoners and felons die as well as their recidivism rates (to avoid those who have been convicted, imprisoned, released and then reconvicted and reincarcerated being counted many times over).

A post by the excellent Timothy Taylor leads to an astonishing study by Sarah Shannon, a sociologist at the University of Georgia, and five colleagues. They estimate that the number of Americans either currently serving a sentence or with a felony conviction or prison time in their background quadrupled between 1980 and 2010 — from 5 million to nearly 20 million. Allowing for further sentencing since 2010 it would not be unreasonable to assume that 23 million Americans are thus marked.

Beyond those convicted of felonies and incarcerated, a study by the Obama administration estimated that “70 million Americans—or roughly a third of the adult population—have some type of criminal record”, including “those with charges that were dismissed or did not result in conviction, as well as those who have completed their legal obligation to serve time in incarceration.”

Of course this system of criminalization and punishment operates with spectacular inequalities. The vast majority of people it marks are men. And African-American men are vastly more likely to be affected by it that any other group. Latino males are also severely affected.

All in all, 15 percent of African American men in the United States have been to prison (compared to about 6 percent of all adult men). But those figures reflect all men alive including older men lucky enough to have escaped the great incarceration drive. For younger cohorts the risks are far higher. “Pettit (2012) estimates that 28 percent of African American men in recent cohorts will have entered prison by age 30-34.”

For boys born in 2001 the lifetime probability of incarceration is estimated to be 32 percent for young black men, 17 percent for Latinos and 6 percent for whites. 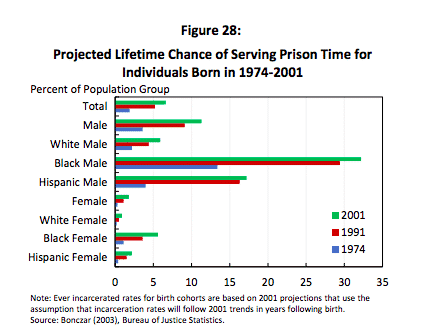 The system of incarceration sucks up the most disadvantaged in society, disproportionately recruited from amongst foster kids, or kids with parents with a history of incarceration or drug abuse. 36 percent were in receipt of public assistance. 11 percent were homeless. 58 percent have mental health issues. Research compiled by the White House report shows that the individuals in question were on the whole marginalized from the labour market “even prior to conviction. Estimates from different data sources suggest that as little as 10 percent of this group have positive preincarceration earnings and that real pre-incarceration yearly earnings range from $3,000 to $28,000.” If the prison population has one thing in common, it is that they were poor on the outside. 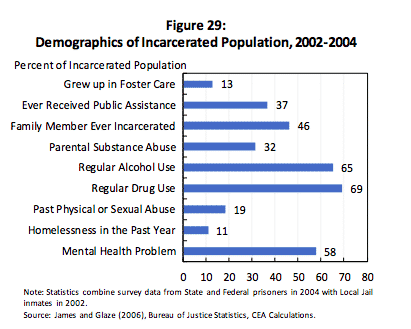 This is a gigantic machine for destroying life chances. And the bitter irony, of course, is that it is immensely expensive. A prison bed costs between $ 14,000 and $ 60,000, varying by state and federal institutions. The cost of a single inmate in one of the higher-cost institutions is comparable to the cost of the police officer who puts them there. It is also, needless to say, comparable to the cost of the College education which virtually none of the inmates have enjoyed. Through the US criminal justice, the American state is spending more money on the inmates than it ever spent on them on the outside.

The impact of this machinery on education, employability and the possibility of forming stable family and social ties are obvious. The vast majority of employers conduct criminal background checks on potential recruits. Thousands of jobs require licenses and certification from which felons are excluded from the get-go. Not surprisingly, therefore, non-participation in the workforce for prime age men who have been incarcerated is three times higher than for those who have never been arrested. For white prime working-age men with a prison record, the non-participation rate in the labour force is 17 %. For black men with a prison record it is 27 percent. The non-participation rate for prime age men untouched by the criminal justice system is 6 percent. Once we include the multiply-disadvantaged groups who have been stigmatized by it, that percentage rises to 9 percent. i.e. by 50 percent.

To talk about any aspect of social inequality or the obstacles to social mobility facing men and particularly minority men in the US without talking about the police and the criminal justice system is simply to ignore these stark realities. America’s machinery of “law and order” is a machine for confirming and massively reinforcing every dimension of inequality in American society. This has no doubt always been true. This is not merely a problem of “bad policy” that can be fixed by technocratic adjustment. It reflects deep and ongoing structures of racialized inequality, which are constantly produced and reproduced and will not be “fixed” by an adjustment of policy. But, the scale on which this machine operates in the present day and its impact on the poorest and most disadvantaged Americans and particularly those of color beggars belief.

With thanks for thought-provoking comments and suggestions from David Stein, Anusar Farooqui and Jess La Bombalera.