Notes on the Global Condition: Wherever it is, let’s bomb it! 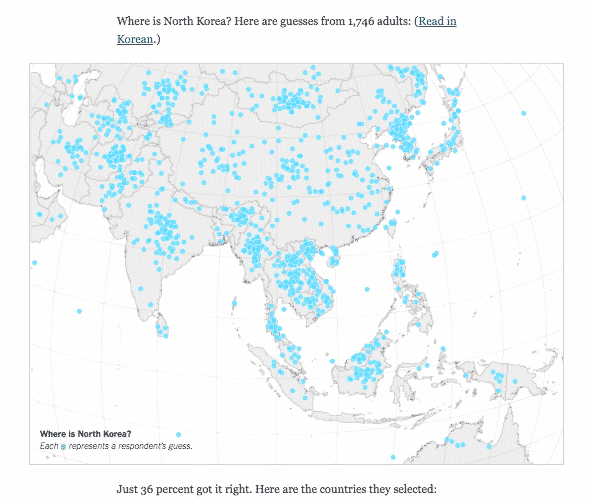 Two mind boggling surveys show that only minorities of Americans can place major foreign policy hotspots even approximately on a map. The questions were asked about Ukraine in 2014 and North Korea in 2017.

Ukraine was placed as follows: 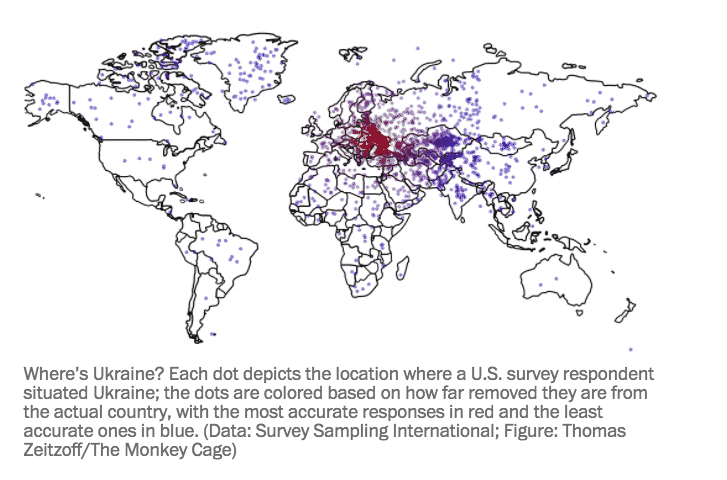 When asked to place North Korea on a map of Asia, respondents gave the following answers:

With regard to North Korea knowledge of its location related to educational, political and demographic background as follows: 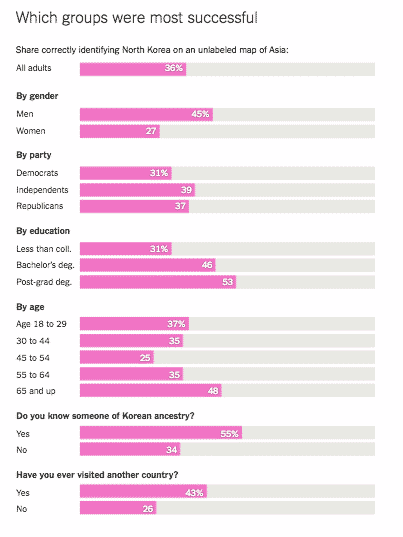 Though geographic knowledge rises with educational level, it is worth pausing to consider the fact that 47 % of Americans with postgraduate degrees cannot find North Korea on a map and less than half of respondents with BAs can locate it.

Aside: this lamentably low level of basic geographic knowledge in an age of globality, is not peculiar to the US.  There are not that many good comparative surveys, but at the time of the second Iraq war the BBC reported the following results: “Not a single country managed the 42 points need for an A grade (in a basic geography quiz with 50 questions), even top scoring Sweden only got an average of 40 questions right. They were followed by Italy and Germany, tied on 38 points each. America notched up a D grade with an average of 23 correct answers.” Britain did only slightly better. Mexico came last.Might it be true that with distance we have also annihilated geography?

What makes the North Korea and Ukraine surveys particularly important is that in both cases being able to locate the country on the map is associated with a more dovish and probably intelligent foreign policy choice.

With regard to Ukraine: “the further our respondents thought that Ukraine was from its actual location, the more they wanted the U.S. to intervene militarily. Even controlling for a series of demographic characteristics and participants’ general foreign policy attitudes, we found that the less accurate our participants were, the more they wanted the U.S. to use force, the greater the threat they saw Russia as posing to U.S. interests, and the more they thought that using force would advance U.S. national security interests; all of these effects are statistically significant at a 95 percent  confidence level. Our results are clear, but also somewhat disconcerting: The less people know about where Ukraine is located on a map, the more they want the U.S. to intervene militarily.”

Exactly the same finding emerged from the more recent survey on North Korea. Those who know where North Korea is, are more likely to favor diplomacy over military options. 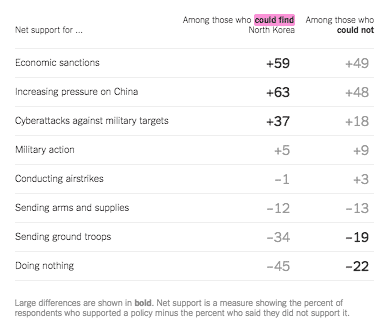 The point of making this post is not to guffaw at the staggering levels of ignorance. The point is to pose the question of whether those of us interested in progressive politics should attach greater value to cultivating elementary knowledge about the world and how in fact our own political sensibility might be related to such knowledge and the channels through which we acquired it. Might knowledge in this elementary sense be, in its own right, the most effective and essential kind of “propaganda”? Isn’t this knowledge necessary for any meaningful kind of citizenship? When we insist that on a sense of equality, rather than superiority, with other people around the world, and thus a kind of responsibility towards each other, how far is that sensibility, are those ethics grounded in certain types of geographic and factual knowledge? Are xenophobia and solipsistic security-based thinking about the world rooted in elementary forms of ignorance as well as regrettable “values” and unfortunately aligned “interests”.

These were questions that were very much to the fore in 19th and early 20th century radical politics. They informed left-wing paperback book clubs, political education sessions etc. And also their right-wing and imperialist counterparts. But where is “political education” now? Doesn’t our current predicament force us to pose the question of ignorance in politics anew for the 21st century? Presumably our best shot at “general enlightenment’ depends, god help us, on social media and the blogosphere? If so, what might a Facebook, Instagram, snapchat, YouTube, twitter-based campaign look like that tried to convey basic geographic knowledge about the world?

Obviously, the basic aim is to empower people to make informed choices. But beyond that, the idea would be that out of a knowledge of the world arises the elementary empathy and respect associated with knowing where we ourselves and others are on the planet. The question is: Is it possible to awaken a sense of responsibility, the responsibility that expresses itself in feeling that you really ought to know where other people, about whom you have opinions, opinions that might (in some small way) matter, actually live?

Objections: I can see a response that explains ignorance by a sense of powerlessness. Why know about the world, if your opinion does not count and you are unlikely to travel very much outside the United States? That kind of passive withdrawal would be sad, but harmless so long as people who were ignorant were indifferent as to foreign policy options or preferred cautious strategies. But, in fact, ignorance about the world is not associated with people being inert. On the contrary it seems to be associated with various types of rather toxic reactivity. The ignorant do have opinions and they appear to favor bombing and boots on the ground. Furthermore, their (ill-informed) preferences expressed in polls, help to legitimate the advocates of aggressive action. In the case of Trump, willful ignorance rules.

And the tendency towards aggression associated with geographic ignorance is likely further enhanced by other areas of ignorance as well. For instance in 2006 in a National Geographic poll, two thirds of the respondents estimated the population of the US at between 750 million and two billion (actual figure at the time: 298 million). With that kind of “mis-overestimation” of America’s resources it is easier to understand, perhaps, why military options seem attractive.

Take an example: Iran. If there is a major push from the Trump administration and Republicans in Congress to bomb Iran, might one prong of a strategy of resistance consist in a concerted and large-scale effort to explain to as many people as possible that it is not “small” and where it is on the map. A more ambitious strategy might consist of conveying five elementary pieces of factual knowledge: that it has a population of almost 80 million (as compared to America’s 320m), what kind of Islam predominates in Iran as opposed to in its neighborhood, how large a country it is, where it is on the map and who, therefore, its neighbors are. Just those five fundamental pieces of information, if conveyed on a large enough scale, might help to change the argument.

In 1992 the fact that George H W Bush didn’t know the price of a gallon of milk was considered quite telling. What you do and do not know, is deeply revealing of your relationship to the world. Bush presumably did know where North Korea was, but had not done his own grocery shopping in a long while, or possibly ever. Why not widen and make explicit the field of factual questions and assumed factual knowledge that frame the political debate and push the question of knowledge in a more general way beyond the qualification of Presidential candidates? Given the state of things it is hard to see how the left could not benefit.