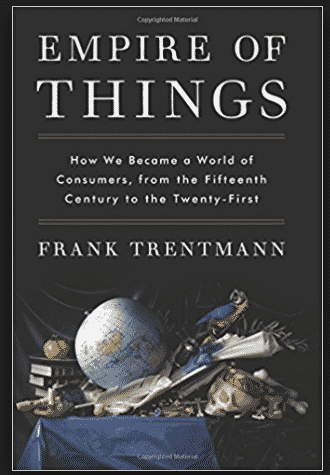 Recently, John Terilla, brilliant mathematician and polymath and puppy-walking friend from Riverside park, alerted me to Deborah Cohen’s wonderful review of Frank Trentmann’s Empire of Things: How we became a world of consumers in the New York Review of Books.

Deborah’s review is characteristically elegant, witty and insightful. If you don’t know her work in British cultural history, it is amongst the very best the field has to offer. The two most recent books are Family Secrets and Household Gods. 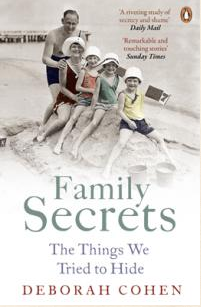 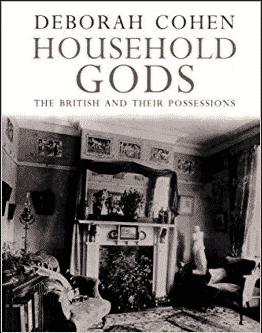 Deborah’s handling of Trentmann is deft. She is the right person to truly bring out the strengths of his culturalist approach and to relish the complexity that his book reveals. Trentmann has put together a compendium of an entire generation of research. Reading it leaves, willy nilly, an indelible impression.

But in the conclusion Deborah pivots to deliver a series of telling critical remarks. The first concerns the state as something other than a consumption-promoting machine:

“Trentmann’s argument about the diversity of consumer societies becomes more strained when he extends it to the Soviet Union in the 1930s. Yes, Stakhanovites were rewarded with a suit for their exertions; for the female comrade, there was a crêpe de Chine dress and an electric iron to press it. But such displays were a sideshow to the central reality: the suppression of consumer demand along with the consumer. Trentmann is right to call attention to the state, but he doesn’t go far enough. What’s needed is an account not just of how states furthered consumption but how they managed to shut it down, in some cases for decades. In 1949, as Mao came to power, there were 10,000 restaurants in Beijing, of which only 656 remained in 1979. While Trentmann mentions in passing such efforts to restrict consumption (Nehru’s campaign for autarky—a more frugal self-sufficient economy—and the Khmer Rouge’s genocidal experiment, to take two very different examples), they are dealt with as exceptions that prove the rule of modern regimes promising their subjects more goods. Such omissions matter because in the early twenty-first century it seems likely that environmental pressures will compel states to regulate consumption in a draconian fashion.”

The second crucial point concerns the articulation of the main body of Trentmann’s book with its conclusion in the late 20th-century environmental problematic:

“If Empire of Things were a play, the stage would become in each scene ever more crowded with amiable consumers who have good intentions and better lives. In an explosive final act, though, they would blaze into spontaneous combustion fueled by their own excess—the unhappy place where we now find ourselves. As Trentmann acknowledges, consumption has been a juggernaut, very difficult to restrain except by coercion. Efforts to expand recycling programs have run alongside, not replaced, ways of life filled with more and more stuff. In advocating for “greater historical realism” about the relentless growth of consumption through the ages, Trentmann is making the point that we cannot rely simply on markets and individual choices to reset the metabolism of consumer society. States will need to take a strong hand. There’s a mismatch between the looming environmental crisis described at the end of the book and its sanguine, even jovial, preceding pages. Trentmann is too good a historian to tell his story with a deterministic conclusion always in sight. He avoids a teleological account of the rise of the carbon economy, one invention after another, leading ineluctably to more intensive resource extraction and rapid global warming. But it is precisely because he insists on taking each episode in the history of consumption on its own terms—exploring why particular developments made sense in the moment, giving play to each era’s contingencies, and emphasizing variety, all strong virtues of his historical account—that the finale to his grand story appears so disconnected from the earlier chapters.”

Deborah’s tone is far more measured than mine. But there is no disguising the convergence between her remarks and the less measured critique of Empire of Things I delivered in the Guardian a while back. Here is how I dealt with precisely the same issues that Deborah highlights – mass production/environmentalism/dictatorship:

“As Trentmann highlights in his conclusion what we most urgently need are histories of the consumption of non-renewable resources, first amongst them carbon-based fossil fuels, starting with coal. But coal is barely mentioned in Empire of Things, except with regard to the question of urban gas supplies. What enabled coal to be transported to the farthest corners of the world was steam power and the railway, the driver of market integration on a continental scale, the enabler of far-flung exchange starting with the Sears mail order business in 19th century America and extending down to China’s new overland Silk Road today. In Empire of Things the railway is allotted one single index entry, referring to a discussion of the impact of contact with the outside world on backwoods Mormon communities and the interest this aroused in fashionable handkerchiefs. After the railway, would follow the entire noisy, exciting and polluting procession – mopeds, motorbikes, cars, air travel. Once upon a time, Fordism was a key concept for thinking about the relationship between mass production and mass consumption. It was, no doubt, a simplistic and self-serving myth. But Empire of Things rejects the mass production paradigm to such an extent that Henry Ford is reduced to a cameo appearance as the patron of an anachronistic rural history museum. The Model T, the VW, the products of GM, FIAT and Toyota that shape everyday life all over the world are absent from Trentmann’s account, whilst pages are given over to the idiosyncrasies of GDR consumer culture and its ludicrous Trabant.

As Trentmann rightly emphasizes we write the history of consumption today after the moment at which the equation between affluence, “Anglo-Saxon markets and liberal democracy” can any longer be taken as self-evident. The rise of Chinese state capitalism changes everything. But that begs the question of how Trentmann addresses the deeper history of growth-fixated authoritarian regimes. He does his best to subsume the twentieth-century dictatorships under his capacious history of consumer politics. And it is true, of course, that as in 1930s Britain or New Deal America, one could find cinemas, silk stockings, sweets and new-fangled motor-cars in Mussolini’s Italy and Hitler’s Germany. Stalin’s experts in mass consumption discovered the attraction of disposable cups on a trip West. But when, on the basis of such ephemera, Trentmann describes Stalin’s regime as a state that “pushed “consumption forward”, as did “New Deal America and Nazi Germany”, the hair-raising lack of context becomes evident. In fact, consumption was brutally suppressed and millions starved to “pay” for one of the most coercive industrialization drives in history.”

What is also undeniable is that Deborah’s prose puts mine to shame. She is a beautiful writer. Rereading my Guardian piece was a bit painful, so painful, in fact, that I wondered whether my original, prior to editing could really have been this bad. Somewhat to my relief, it wasn’t. For those interested, my unedited take on Trentmann is here, Tooze Trentmann Guardian Review Original Prior to Editing April 2016.