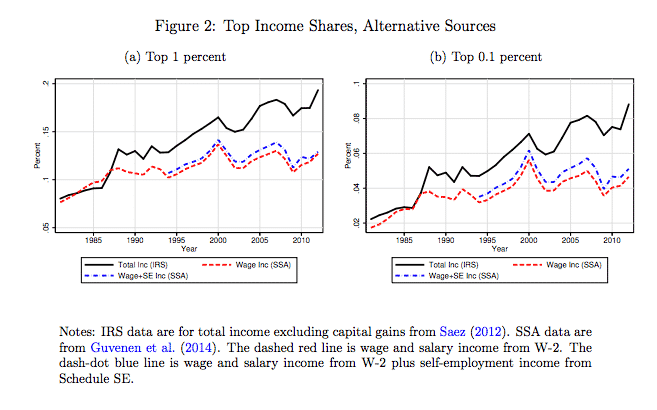 News from the inequality front.

If you start with the famous Saez 99/1 % income shares graph, it is clear that the action starts in the 1980s and what needs to be explained is the surge from the mid 1980s onwards. 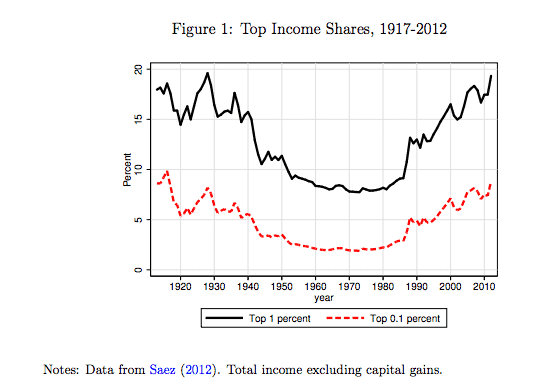 If you dig into the sources it emerges that the story since the 1980s depends on which measures of income you use. Saez et al use IRS data which count a wide range of different income types, including capital income but not capital gains. These are attributed to tricky tax units not actual physical individuals. This could be a real issue, but doesnt turn out to be. What does matter is the definition of income. There is a stark difference in the story as told from IRS data and Social Security Administration (SSA) data reporting individual W2 labour incomes. Individual labour income disparity widens less radically and stops widening altogether from 2000. The action is in the “other income sources”.

As the authors put it: “Thus, the large and widening gap between the commonly reported IRS measure of top income shares and the SSA measure we report here is due to differences between the wage, salary, and self-employment income measured in the SSA data, and the broader measure of income measured in the IRS data. Given that the recent rise in top income shares is not from labor income, which components of income are driving this increase? Four main components of income are included in the total income measure but are excluded from the wage and salaries measure: (i) entrepreneurial income, (ii) dividends, (iii) interest, and (iv) rents. Figure 5 shows the share of total income that is accounted for by each of these categories of income accruing to the top 1 percent (left panel) and top 0.1 percent (right panel). Over this period, the category that has shown the biggest increase is entrepreneurial income (solid red line). With the exception of the mid-2000s, which saw a brief rise in interest and dividend income, essentially all of the differential trend in top shares between wage and salary income and total income can be attributed to the sharp rise in the share of entrepreneurial income of top earners in total income. 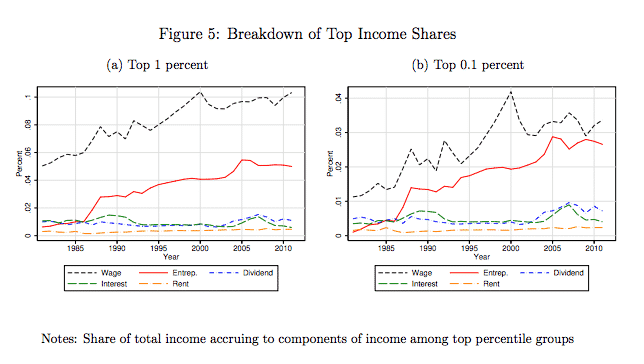 The authors: “In summary, essentially all of the increase in top income shares in IRS data over the last 30 years is due to an increase in entrepreneurial income, in particular income earned by pass-through entities such as S-corporations. For the period from 1981 to 2000, the effects of income shifting due to TRA86 (AT a tax code change that made it very attractive to shift business income from standard “c-corporations” to “s-corporations” that get declared as personal income tax liability thus avoiding corporation tax .. on this a future post!) likely explain the majority of the additional top share growth observed in the IRS total income data compared with the SSA wage and salary data. For the period post-2000, top income shares computed using only wage, salary, and Schedule SE income are either flat or declining, whereas top shares based on a broader measure of income show a continued increase. Almost all of this recent increase is due to an increase in the share of income accruing to S-corporations, whereas capital income such as interest and dividends have played a very minor role.”

And when you dig into who actually benefits from the income streams diverted from standard C-corporations to S-corporation pass throughs it turns out, perhaps not surprisingly, that it benefits a truly tiny group. Not the 1 % or even the 0.1% but the 0.01 %. 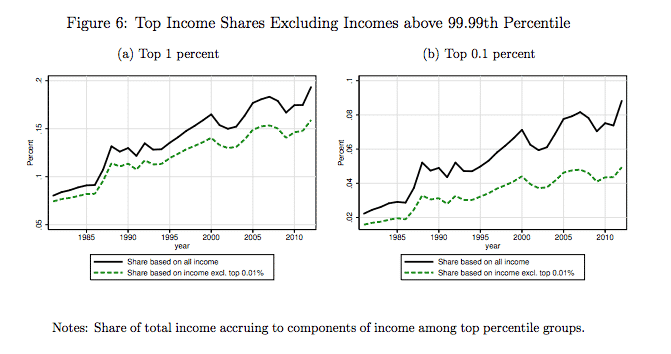 As a bonus the authors add a further consideration. Increases in top income shares may be due to rapid income growth at the very top. Since we are talking about shares, they may also be due to slower growth at the “bottom”. One can describe the difference by taking a given “normal” growth rate and then comparing growth of the top 1 % and bottom 99 % relative to that benchmark. If you take 2 % as your benchmark then roughly half of the shift since 1981 is due to the much more rapid growth at the top and half due to below average growth at the bottom. If you break down the bottom 99 % the gap will be even more stark.

The big news here are the insights into how the richest 12,000 take their incomes. More on this in a future post.

PrevPreviousNotes on the Global Condition: “Unstable, unbalanced, uncoordinated and unsustainable”? How dangerous is the Sino-American economic imbalance?
NextNotes on the global condition: Have we ever been global? Tyler Cowen and the “distance puzzle”Next
related posts