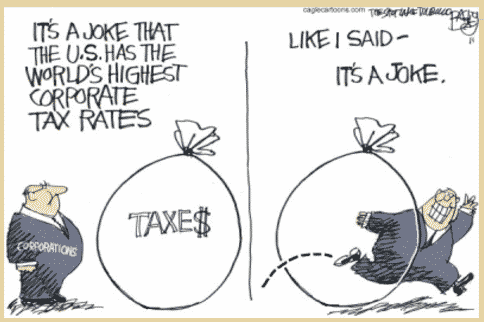 Earlier this month the Institute on Taxation and Economic Policy (ITEP) put out a fascinating and underreported document on the taxes paid by largest US corporations. ITEP focused its attention on the 258 corporations within the S&P 500 who made profit in every year between 2008 and 20015, earning a collective total of $ 3.8 trillion in pretax profit.

The report’s main headline is that the effective tax rate paid by this group was far less than the official 35 % rate which American business lobbyists endlessly complain about and which provides the Trump administration with its chief target. The report’s finding is that these corporations in fact paid 21.2 % on their US profits over the the period from 2008-2015. This is lower than previous estimates by agencies like the American Enterprise Institute, who promptly took to attacking the ITEP report. But in fact, the AEI’s own estimates are not totally out of line and both are broadly comparable with estimates for other OECD countries. No need to get lost in the accounting weeds here.

In any case, what are more striking are the other findings of the report, which highlight the huge variation in the tax rates paid by America’s top corporations. This results from competitive business models, business strategies, a ramshackle collection of tax breaks, more or less ambitious tax minimization strategies and outright political negotiation. It points to the fact that capitalism under conditions of oligopoly (NB oligopoly not oligarchy) utterly subverts liberal norms of equal treatment. Political economy operates across an astonishingly uneven terrain and helps to reinforce and reproduce that unevenness. 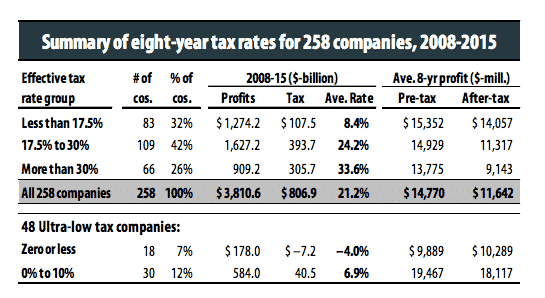 The most extreme group are the 18 corporations that earned profits on their US operations in every year between 2008 and 2015, racking up a total of $ 178 bn in earnings, but were paid a net tax credit of $ 7.2 bn. 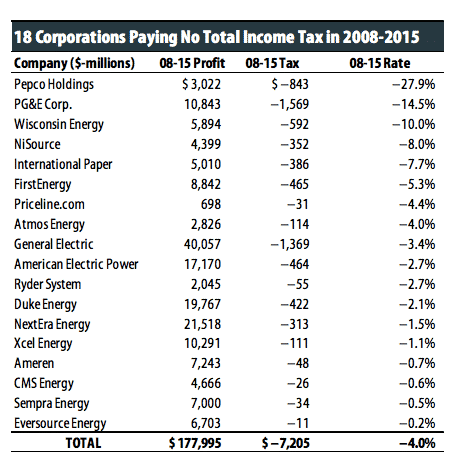 Numerically, energy companies dominate this group. This is facilitated by enormously generous depreciation provisions. But the giant amongst tax optimizers was GE, which earned $ 40 bn across the 2008-2015 period, but after taxes paid and rebates earned a net credit of $ 1.36 bn. GE don’t like being highlighted in this way and responded with a blustering press release to the New York Times which stressed that they paid a lot of tax in a lot of places. This is not doubt true, but that begs the question of their net tax payment and where those taxes were paid.

The “negative” tax payers were the extreme cases. But overall this group of highly profitable American corporations benefited from a whopping $ 527 bn in tax subsidies. With the largest recipients in absolute terms being telecoms and Banks.

One can group these results by industry, to reveal stark differences between highly favored investment intensive sectors like electrical utilities and the health care sector and retail, which are the sectors that come closest to being subject to a “vanilla” tax regime. 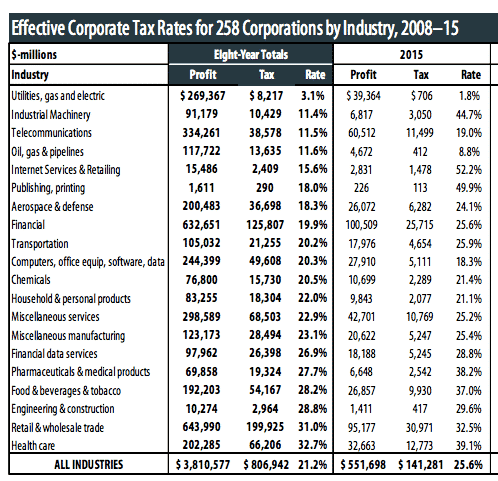 And one can then compare the distribution of profits to the distribution of subsidies to reveal the peculiar skewing of the system. As the report comments: “It seems rather odd, not to mention highly wasteful, that the industries with the largest subsidies are ones that would seem to need them least. Regulated utilities, for example, make investment decisions in concert with their regulators based on needs of communities they serve. Oil and gas companies are so profitable that even President George W. Bush said they did not need tax breaks. He could have said the same about telecommunications companies. Financial companies get so much federal support that adding huge tax breaks on top of that seems unnecessary.” The question for political economy is what the mechanisms are through which those clearly unwarranted advantages are secured. How did we arrive at a situation where gas and electricity utilities generate 7 % of profits but receive 16.3 % of tax subsidies v. retail which earns 17 % of corporate profits but receives 5 % of subsidies? 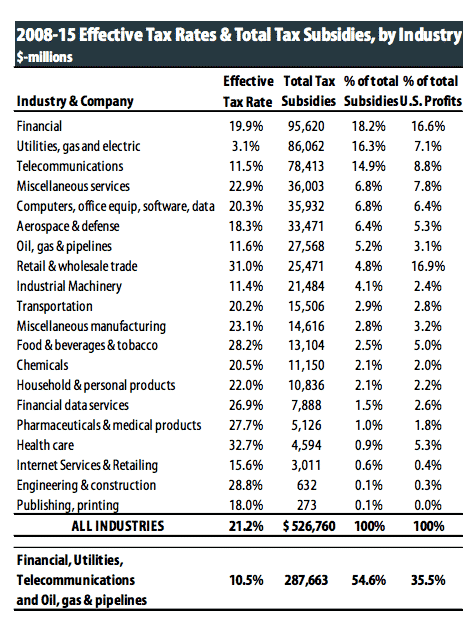 But industry by industry analysis only takes you so far, because there are also stark differences between corporations within sectors driven by individual corporate business strategies and tax tactics. Take for instance the industrial machinery sector where John Deere and Honeywell International, which one might think of as similar businesses, were subject to radically different tax rates.

The ITEP report is focused on US profits and taxes. To isolate this element of corporate activity they have to engage in an interesting effort to differentiate between US and foreign profits. The results are really striking. 107 of the firms in the sample report significant foreign profits. It isnt an entirely secure inference from the table below, but there would appear to be less variation in the taxes that they pay abroad than in the US. Certainly for a majority of the US corporations the tax they pay in the US is lower than that paid abroad. And overall tax rates are near identical undercutting one of the most common contentions of the business lobby.

The breakdown of foreign and US profit and tax paid is truly striking and goes some way towards squaring the GE circle. 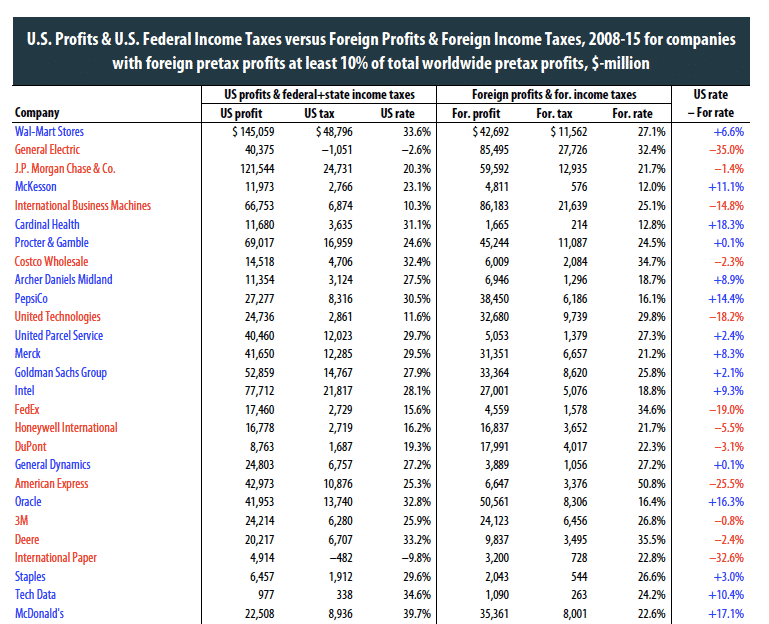 GE does indeed pay a lot of tax, just not in the US. The difference between the effective tax rate on its US and overseas business between 2008 and 2015 is a staggering 35 %!

And then there are the rogue cases. 15 of America’s most prominent corporations including many of the key tech giants exploit prevailing rules ruthlessly, to the point at which the account of their business activities rendered by publicly available sources appears to be meaningless. 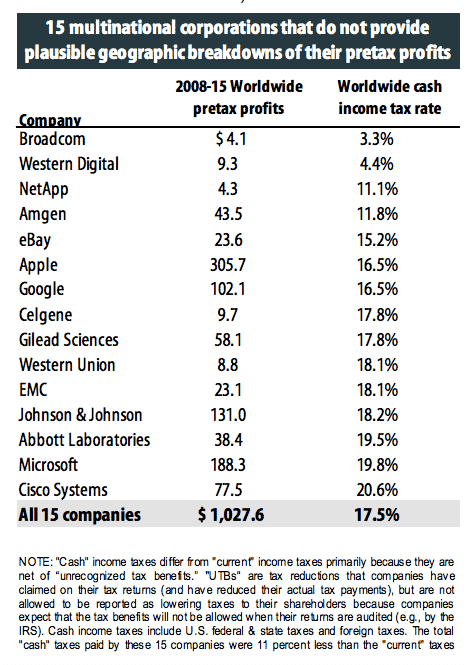 About these data the report comments laconically: “Apple, for tax purposes, has moved about two-thirds of its worldwide profits to Ireland, where those profits are taxed neither by Ireland nor by the U.S. or any other government. Google claims to have paid a U.S. tax rate of 34.3 percent, versus a foreign tax rate of only 5.5 percent. • Microsoft says that only a quarter of its profits are in the U.S., even though it says that more than half its revenues are in the U.S. Microsoft would like us to believe that its U.S. tax rate on its U.S. profits was 45.7 percent, while it’s foreign tax rate on foreign profits was only 9.6 percent. ”

There is much further one push the ITEP agenda. But in the mean time read this as a Saturday manifesto for fiscal sociology. As Schumpeter said “Public finances are one of the best starting points for an investigation of society”. And “once taxes exist they become a handle which social powers grip in order to change the structure” of that society.