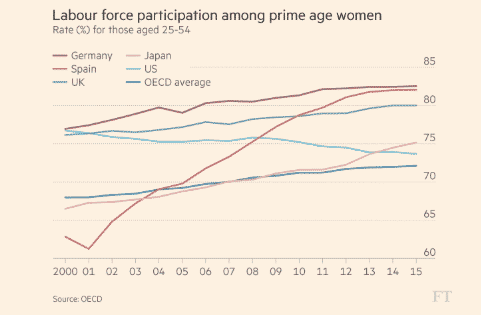 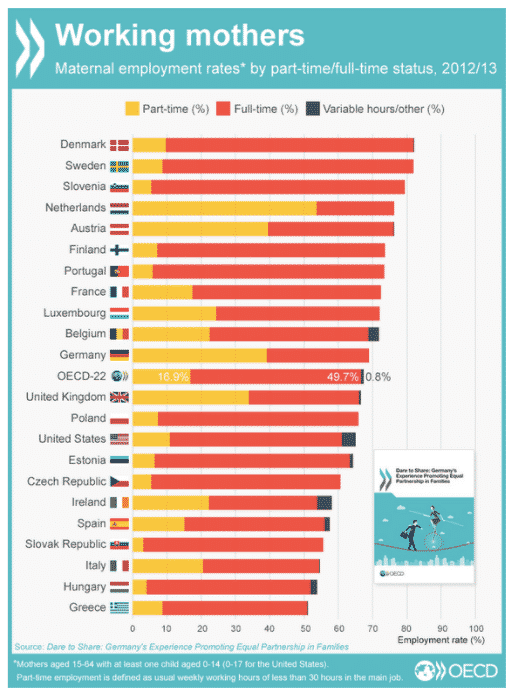 If this retreat were the result of a politics of decommodification one might celebrate the trend. But that seems highly implausible. What seems plausible is that it is linked to America having a tax, welfare, labour market and labour rights regime that is amongst the most hostile to families, parents and children on the planet. Women bear the brunt of this.

This matters, not just for equity, quality of life and broader political reasons. It also matters because women are increasingly the most educated and “valuable” part of the labour force, as measured by college enrollment rates.

The issue is attracting attention in the pages of the FT https://www.ft.com/content/25a897bc-ec9a-11e6-ba01-119a44939bb6 and (indirectly) from agencies like the OECD. The OECD recently issued a lengthy report evaluating Germany’s efforts since the 1990s to enable women’s labour market participation, to provide early childhood education etc. http://www.oecd-ilibrary.org/docserver/download/8116111e.pdf?expires=1487854388&id=id&accname=ocid177456&checksum=726F09ADD9F897BEDB217E26FC60ED19

It is no bed of roses. But, yes, Germany unlike the US, has invested substantially in these policy fields. Things were kicked off by the questions posed by the unification of two very different biopolitical regimes between East and West in the early 1990s. Red-Green t0ok up the issue in the 1990s and since then it has become a main plank of Merkel et al’s efforts to modernize the CDU. The data compiled by the OECD to rank Germany’s efforts are fascinating. But indirectly they throw a stark light on the situation in the US.

Look for the US at the very bottom (left hand side) of this global ranking: 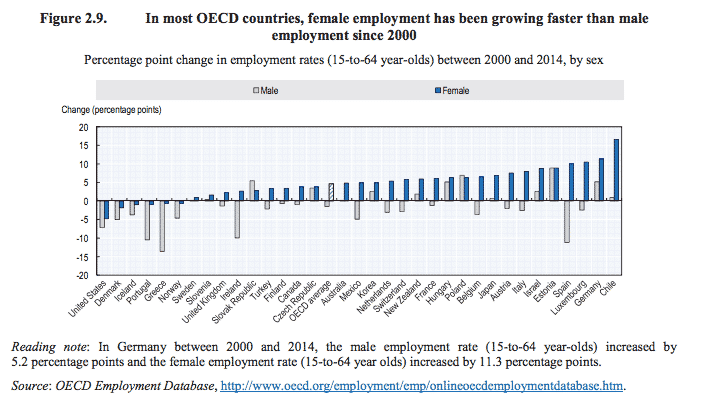 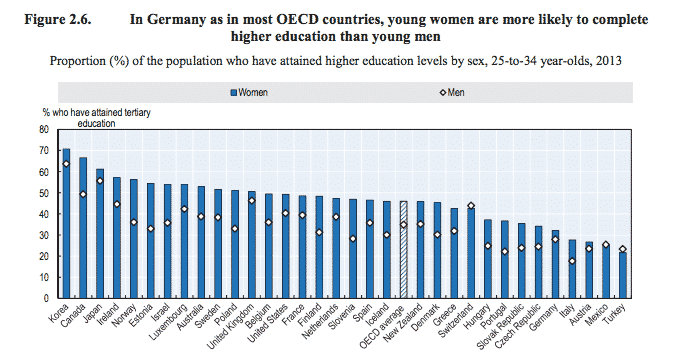 First obvious reason why women drop out of the American labour market is that American parents essentially have no rights to parental leave. 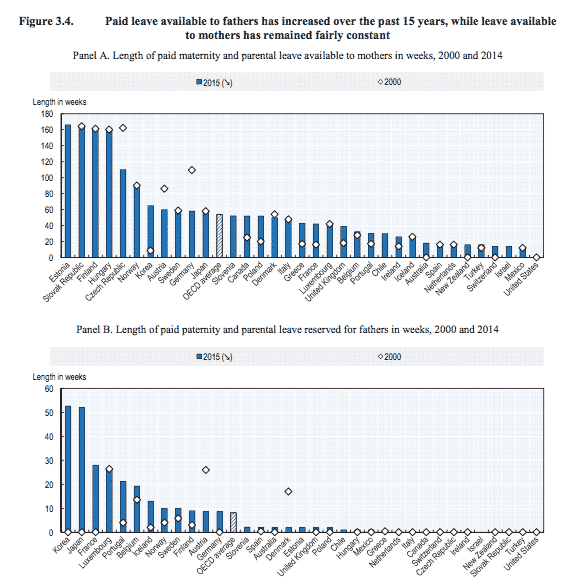 America’s public spending on families is niggardly, about one third what comparable rich societies in Europe spend supporting families. 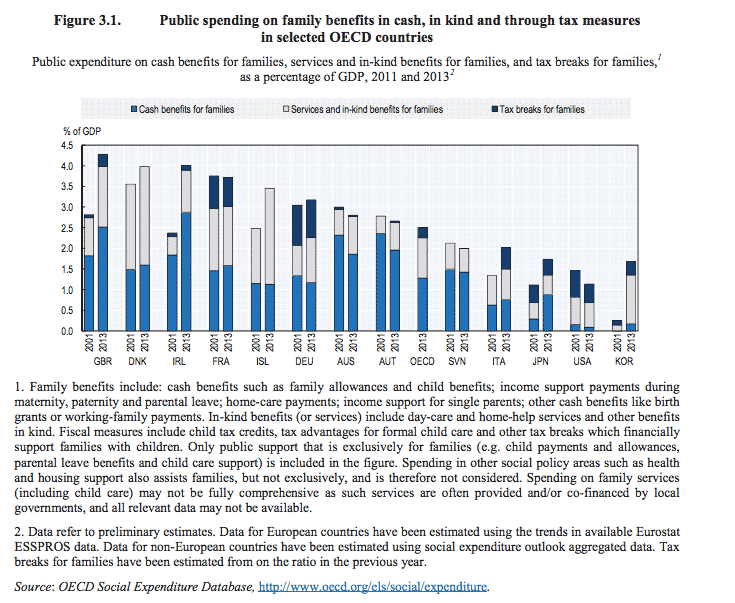 Whereas many tax systems benefit families who split incomes between two earners, incentivizing both parents to remain in the labour market, the US tax system provides no such support. If you have one prime earner it makes sense for that person to maximize their career potential. 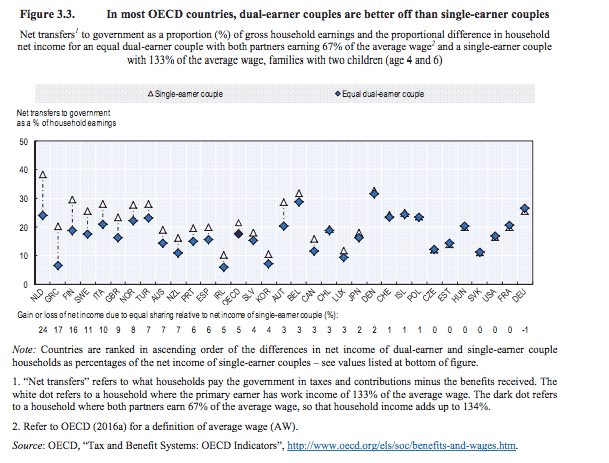 Finally, enrolment of kids in formal childcare before the age of 2 in the US is well below average. 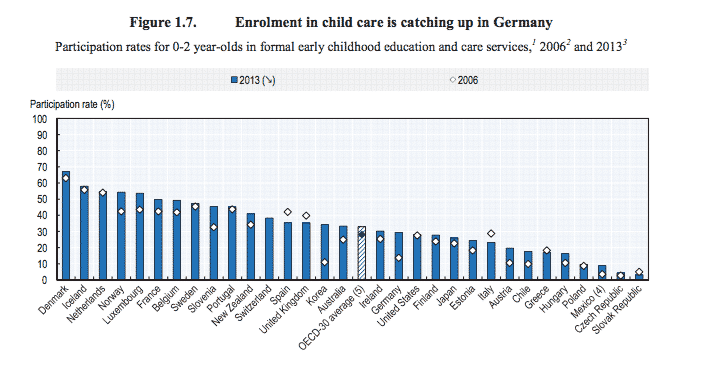 And that is in large part due to the exorbitant cost of childcare in the US, something that the US has in common with the rest of the Anglosphere. 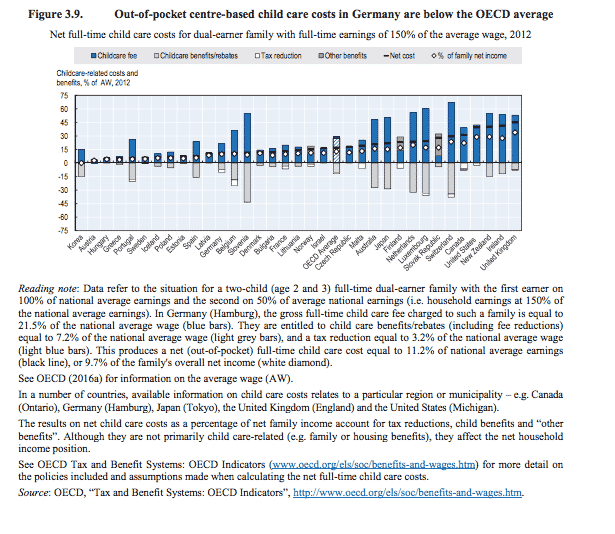 The figures for childcare costs are breathtaking, but if you’ve been there you know they are not far off. For a family with 2 kids and a family income at 150 % of the average, they would amount to something like 45 % of family income, which is why families with 2 kids and modest incomes generally do not have two kids in formal childcare and rely instead on informal networks and one partner (usually the mother) dropping out of paid work.

The impact on everyone but the very affluent is obvious. At the bottom end of the American income and wealth pyramid the link to inter-generational “cycles of poverty” etc are all too obvious.

The fact that childcare has the low political visibility that it does, speaks volumes.