What held Nazi Germany together? The Aly-Tooze debate revisited. 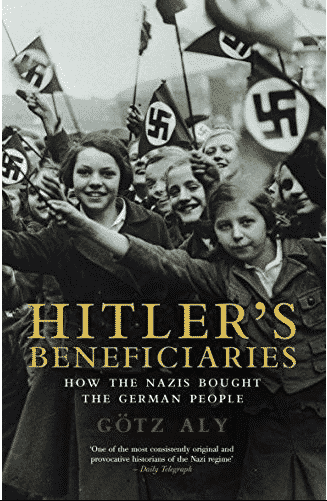 In 2005 the pioneering historian of Nazi Germany Götz Aly published a remarkable book about the social base of Hitler’s regime, Hitler’s Volksstaat which appeared in English as Hitler’s Beneficiaries. In brief Aly claimed that Germany’s population were not fanatical ideological Nazis or coerced into backing the Nazi regime. They were bought. They were the beneficiaries of a new welfare state funded by plunder – first from the Jews and then from the entire population of occupied Europe. Ordinary Germans, Aly claimed, paid only 10 % of the costs of the war. 20 % came from higher-income groups. The rest was paid for by plunder. And for all of the talk of reconstruction and denazification, Aly does not believe that in this basic respect the Germans were ever  denazified. The depoliticized dependence on the social provisions of the state remained a feature of postwar Germany. The book thus revealed, even more clearly than Aly’s earlier work, his fundamental suspicion of the 20th century welfare state. Previously he had focused on technocracy, biopolitical experts, eugenicists, medics, statisticians, economists. Now his critique was directed at the holy cow of redistribution itself.

Aly is one of the most provocative and original historians of Nazi Germany.For some background on Aly’s interesting biography see this interview he did at Yad Vashem:

Hitlers Volksstaat reveals both the strengths and weaknesses of his scholarship. It is brilliantly original in its microscopic reconstructions. But it is framed by a contentious vision of modern German history and in this case by some misconceived macroeconomics. Fundamentally, Aly’s critique of the Nazi welfare states is founded on pre-Keynesian economics, which falls back behind the understanding of the Nazi technocrats themselves.

Hitler’s Volksstaat appeared just as I had finished Wages of Destruction, so things were primed for a debate.

Following an initial round of glowing media reception, my review of Aly’s book appeared in Berlin’s left-wing daily the TAZ on 12.3.2005. Einfach verkalkuliert – taz It was an appreciative but highly critical review. The costs of the war were distributed not 30/70 German/foreign as Aly claimed to have shown, but the other way around 70/30. Aly had succumbed to a common fallacy about debt, which economic thinkers like Keynes but also key Nazi technocrats had criticized at the time. And this mattered because on this, more conventional basis, it was not plausible to put exclusive focus on material inducements as the foundation for Hitler’s regime. It was a demanding, mobilizing dictatorship, held together and energized by coercion, ideological passion and the compelling force of the war itself – to use shorthand.

So far so ordinary: controversial book –> critical review. But the nature of my critique, the subject matter, the stark contrast with earlier more appreciative reviews and the place where it appeared all came together to create a bit of scandal. Earlier in his career Aly had been a member of the TAZ team. He was a fixture on the left-wing scene in Berlin. The TAZ editors thought long and hard about publishing the review and taking sides. But you get a sense of what happened from the titles that they chose for the ensuing exchange.

12, 15, 16 March … it was hectic, adrenalized stuff ! And it escalated into a mini media storm. There was comment in other newspapers, radio segments, discussion on television – the kind of whirlwind around academic history that is hard to imagine outside the Federal Republic and the cultural politics of Vergangenheitsbewältigung (Coming to terms with the past).

The debate widened. The right-wing Die Welt gave Aly a platform. They warm to critics of the welfare state, whatever their background. Following Volker Ullrich’s glowing review in Die Zeit 11/05 Aly replied to my critical review and that of Hans-Ulrich Wehler in Die Zeit 15/05.

Die Zeit then asked me to follow up with a further round in issue 18/05.  Since Aly liked to dismiss the economic arguments offered against him as mere technicalities I shifted the battle so as to foreground his simplistic and unsubstantiated claims about German depoliticization. Download here: debatte_ Stramme junge Männer in braunen Uniformen _ ZEIT ONLINE

The brilliant Michael Wildt contributed a particularly thought-provoking piece in Die Zeit 19/05. From the side of economic history Mark Spoerer, the leading expert on profits in the Third Reich and a powerful scholar of slave labour, delivered a further devastating rebuttal to Aly in http://www.hsozkult.de/publicationreview/id/rezbuecher-6430

Other reviews of Aly’s book appeared in the FAZ, NZZ, Junge Freiheit, SZ and others.

The argument was conducted in German. I was later asked to produce a longer piece for the Israeli Holocaust journal Dapim and then for the Telegraph when Aly’s book appeared in English. The Telegraph review was: A new look at Nazi plunder – Telegraph (Hilariously it seems that an excerpt from this Telegraph review was actually used as a blurb in one of the English editions!).

For those interested less in the blow by blow and more the substance of the debate, the Dapim piece is the place to go.(download here in English Tooze Review of Aly for Dapim 2005). It gave me the space to lay out some of the wider historiographical setting and some of the broader questions engaged.

This little 2*2 locates Aly in a mapping of historiographical positions on the idealist/materialist v. elite/demotic axes. In the Dapim piece, I work that grid back and forth for a while, before starting to mess with the crude material/ideology distinction that sets up the left-hand side of the grid. The particular bee in my bonnet is Nazi militarization, seen as material ideology and ideological material. More on this in some later post about the history and politics of weapons in the Third Reich. But there are so many other places one could take this. I would also be tempted to mess with the top line, to break down the elite v demos distinction and think harder about the sociology of power in the Third Reich.

So …. I would do things differently today. But, if you are interested in the question of how to think the relationship of material inducement, ideology in holding the Third Reich together, this may be worth a look.

It is a little weird revisiting all this old stuff. I fear that academic leave and building a website tend to encourage narcissistic self-reflection. I guess one can only hope to turn it in a productive direction. I’ve been away from Third Reich history for a while now. But if/when I return, this is where I would be tempted to to pick things up: “Things in an age of extremes”.

Thanks to Sam Moyn for suggesting that I assemble this material and put this post together.